Red Cross swimming lessons have been a rite of passage for 76 years. They'll soon be history.

After serving tens of millions of Canadians, the swimming program will be shuttered by the end of 2022. So what becomes of those beautiful badges? 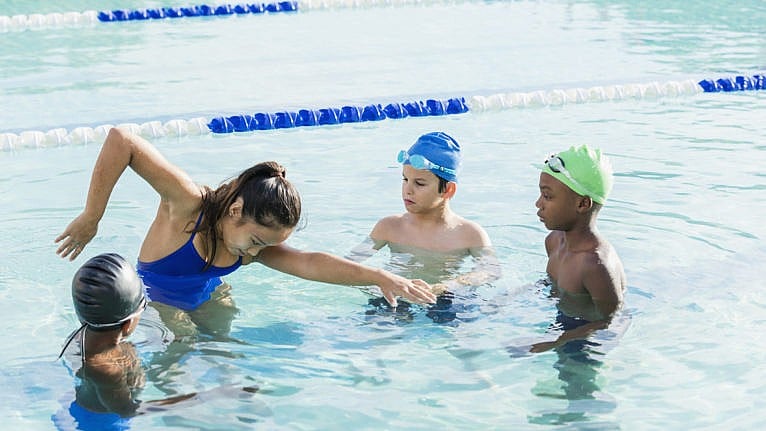 If you’re a Canadian who remembers your childhood swim lessons, odds are that memory bank includes Red Cross swim badges. In recent years, kids received ovals with bilingual text (Swim Natation); colour badges were the rage in the 1980s and 1990s; the more old-school crowd got simple “junior” or “senior” cross badges, or ones with the agency’s mascot, Walter Safety.

Perhaps yours were sewn onto your swimsuit or a special towel. Rishona Hyman still has hers in a keepsake box, the eight colour levels strung together in sequence—yellow-orange-red-maroon, and on up. This spring, she’ll hang them in her office, a sentimental nod to an era about to end.

The Canadian Red Cross announced in early January that it is shuttering its swim and lifeguard training programs by December. It’s a major retrenchment for an agency that’s been synonymous with water safety since 1946, when it branched into aquatic day camps and lessons throughout Canada to curb the 1,000 drowning deaths recorded each year. (The number is now below 500, though the country’s population has tripled since then.)

READ: The pandemic has proven that kids are not as resilient as we think

This leaves about 1,700 municipalities, camps and other groups nationwide looking for a new aquatic courses to adopt, along with new kids’ report cards and a new badge or sticker system. Hyman has run Aqua Essence Swim Academy in Winnipeg for 20 years, teaching Red Cross program in hotel pools, private backyards and city facilities with available time blocks. After the surprise announcement hit the inboxes of her and other swimming providers on Jan. 11, they used terms like “blindsided” and “picking my jaw up off the ground,” Hyman says. “Wow, the aquatic world has just changed forever in the moment you read that email.”

Red Cross is abandoning the swim program for a depressingly 2020s-defining reason: they’re shifting to focus on the myriad humanitarian needs the agency handles, from COVID response to the growing number of natural disasters brought on by climate change, as well as its federally funded efforts to combat opioid-related deaths. Nobody at the Canadian Red Cross was made available to comment to Maclean’s, but CEO Conrad Sauvé said in a statement that “the relative humanitarian need for water safety training has been surpassed by demands in other areas in which we are well positioned to make a difference.” (The agency will continue swim programs in Indigenous communities, and maintain its first aid programs Canada-wide.)

For months before this decision was publicized, the not-for-profit worked quietly with Lifesaving Society Canada—the country’s big player for lifeguard training—to offer all Red Cross swim providers an easy transition program to Lifesaving’s own instruction program, Swim for Life; it launched in 2002 as a competitor of sorts to Red Cross swimming courses. Instead of Red Cross’ starfish, duck and sea turtle levels, Lifesaving has “parent and tot” classes. The two organizations’ courses for older children roughly correspond (Red Cross Swim Kids 6 is equal to Swim for Life Swimmer 4 or 5 levels), and an online re-accreditation program will be offered to the tens of thousands of Red Cross instructors who will need new credentials.

The two programs have slight differences in approaches—only Red Cross teaches side stroke, Hyman notes. But most parents and swimmers likely won’t notice much beyond cosmetic touches, like Swim for Life’s round blue or green badges. “It’s not an area where people shop around a lot,” says Barbara Byers, the Lifesaving Society’s public education director.

The YMCA has its own swim lesson system, as do City of Toronto pools, and there are several smaller program offerings that aquatic centres can choose from. But some an astounding 40 million Canadians have taken Red Cross swim classes over the last 76 years, making this a nostalgia-tinged change for many parents and swimmers.

“People were very comfortable with Red Cross. It’s just what you did—Red Cross swimming lessons,” says Hyman, who will bring in a different badge system and a curriculum of her own design when she opens her academy’s new pool in late spring.

Ryan Cochrane remembers the Red Cross courses he took as a kid at Gordon Head Recreation Centre in Saanich, B.C., learning the front crawl he’d later refine to win two Olympic medals in freestyle. Competitive swimming wasn’t on his or his parents’ mind then; it was just about getting him comfortable in the water.

“I realize in retrospect how competitive I was, even at that age, because you wanted to get those badges as fast as you could,” he recalls. Before he’d rack up trophies and medals, Cochrane would race his twin brother Devon to fill up their bulletin board with more of those colourful embroidered squares.

While Cochrane is wistful about the news of the Red Cross’ retreat from swimming—”so well run, a staple for decades”—he understands the decision.“The world’s changed in the last 20 or 30 years when I did the classes,” he says. “The world needs support in other realms.”