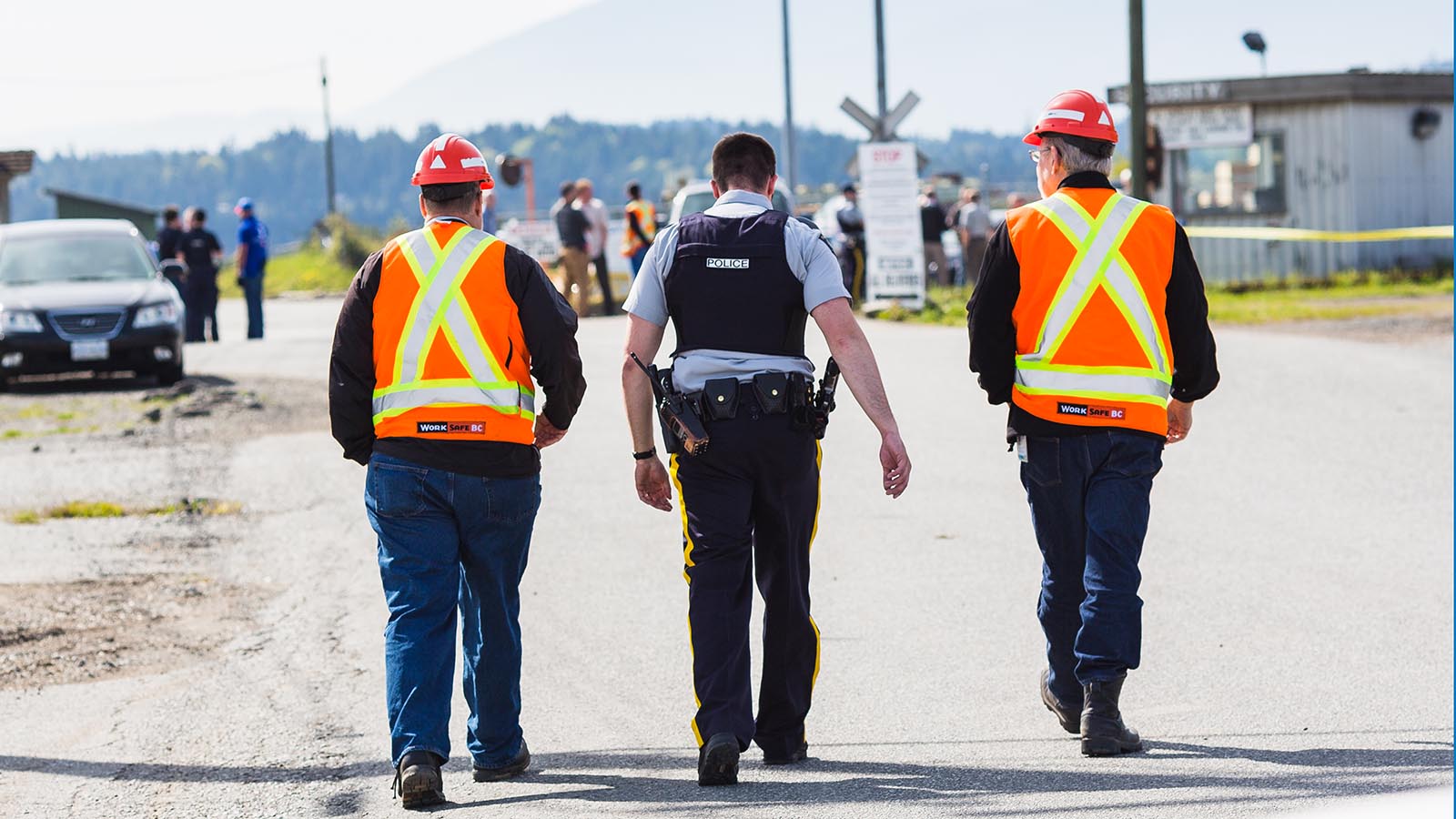 Shell-shocked employees of Western Forest Products on Vancouver Island began trickling back to work this week, five days after a man armed with a shotgun stormed the company’s Nanaimo sawmill April 30, fatally shooting two workers and wounding two others. As often happens following tragic incidents of workplace violence, security was heightened throughout the company’s coastal operations as workers struggled with the knowledge that one of their own, former employee Kevin Douglas Addison, 47, faces charges of first-degree murder.

Flags were flying at half-mast as residents of Nanaimo braced for the funerals Saturday of two well-known locals: 53-year-old mill superintendent Fred McEachern was killed just five days before he was to leave on a Las Vegas vacation with his wife; 61-year-old Michael Lunn, a forklift driver, union steward and Santa Claus at the annual Legion Christmas party, was shot in the mill parking lot as he left his truck to start the 7 a.m. shift. Employee Earl Kelly remains in hospital in stable condition and Tony Sudar, the mill’s vice-president of manufacturing, was released from hospital after the gunman shot at him in his office, wounding the side of his face.

Most everyone in the Nanaimo area, a tight-knit region of about 150,000, knows someone who works at Western Forest, or who was laid off during a major restructuring of its operations starting in 2008. Residents are left to ponder what more the company could have done to protect its workers. “Western is working closely with our colleagues at United Steelworks Local 1-1937 to review the security of our workplaces,” company president and CEO Don Demens said in a statement. “We will make any changes needed to ensure our colleagues are confident in the security of their work environment.” The company and union are co-operating to ensure workers and their families receive grief counselling, but it’s clear the entire community—better known as the home of Nanaimo bars and a wacky annual bathtub race—will carry the scars for years. “I know everybody in that damn mill. It just blows me away,” said Al Thompson, a shaken, sun-weathered trucker who hauls lumber from the mill. Janine Westby rushed to the scene knowing her ex-husband, her son’s father, worked there. She’d later learn he was unharmed, but the brave front she’d displayed for her son earlier that morning was betrayed by her tear-tracked mascara. “I don’t even want to tell him about this,” she said of her son, “because then every time his dad goes off to work he’ll think his dad is going to die.”

The ripples are huge in a small community. “Workplace shootings are supposed to happen in other, distant places, not on peaceful, laid-back Vancouver Island,” began a shared editorial published by the Victoria Times-Colonist and Nanaimo Daily News. Unfortunately, the evidence states otherwise. While workplace gun deaths are indeed more prevalent in the U.S., Canada has no lock on virtue. A Statistics Canada study based on a 2004 survey found 17 per cent of all self-reported violent victimization that year happened in the workplace. There were 356,000 violent acts in the 10 provinces, including sexual assault, robbery and physical assault.

Experts in the field say even that number underrepresents the problem, since many assaults go unreported. As well, the StatsCan study used “a fairly narrow definition” of violence, says Jessie Callaghan of the Canadian Centre for Occupational Health and Safety and a specialist in workplace violence. “We define violence much more broadly; we include bullying and harassment behaviours and threatening behaviours,” said Callaghan.

Glenn French, president and founder of the Canadian Initiative on Workplace Violence, a Toronto-based national threat-assessment consultancy, agrees the few statistics available underrepresent the risks in workplaces. As to whether violence is on the increase, “I’ve been practising for 40 years and the answer is we don’t know. The reason is people haven’t been collecting information in the workplace in an organized and consistent way,” he says. “I suspect there probably has been some increase.” Gun violence remains the exception. “We do it the Canadian way: we don’t kill you, we’ll just make your life a living hell by harassing and intimidating you on the job,” French says. “The face of violence in Canada tends to be far more indirect than what we’ve seen [in Nanaimo].”

Tragically, however, there are exceptions. Workplace violence resulting in multiple fatalities include a knifing rampage this February at a Loblaws warehouse in Edmonton by a worker accused of killing two fellow employees and stabbing four others; in 2012, armoured car guard Travis Baumgartner killed three fellow guards and wounded a fourth in a robbery gone wrong at the University of Alberta; in 2002, Dick Anderson, fired from his job with the B.C. environment ministry in Kamloops, shot and killed his supervisor and a shop steward before killing himself; in 1999, Pierre Lebrun, a bullied employee of Ottawa’s OC Transpo, shot and killed four employees in the transit garage before killing himself; in 1992, Valery Fabricant, a professor at Montreal’s Concordia University, shot and killed four members of the engineering faculty. This April, four employees of the Toronto offices of Ceridian Canada, a human resources company, were stabbed, allegedly by a worker about to be fired. All survived their injuries.

More numerous are deadly workplace assaults on individuals, some triggered by workplace disputes, mental illness or estranged spouses. The occupational health and safety centre lists a series of occupations and factors that increase the risk of violence. The jobs include cashiers, pharmacists, health care staff, teachers, bar staff and those in inspection and enforcement. Risk factors include working alone or with unstable people, and “working during periods of intense organization change (e.g. strikes, downsizing).”

No one among police, the company or the union has ascribed a motive to the Western Forest killings but laid-off workers have been in a protracted dispute with the company over severance pay after the mill shut down in 2008. Addison, a forklift driver who liked to talk about his hunting exploits, was among those who lost his job. The mill reopened in 2010 with only 30 of 140 original workers called back. “When the rest of us got hired back, apparently he was turned down and they wouldn’t bring him back,” said mill worker Rex Boden. He called Addison a regular guy, “just one of the boys.” Roy Robertson, a retired mill employee, called Addison “an absolutely super nice guy. But me, you, anyone else can crack under pressure. I don’t know his situation.” A neighbour of Addison, who refused to give her full name, told reporters that Addison doted on a teenage daughter and struggled to make ends meet. A slight figure with brown hair and a beard, he showed little emotion during a brief court appearance a day after the shooting. His brother-in-law, George Rounis, said the family was “saddened and devastated.”

The emotional scars from such tragedies will take months or years to heal, if they ever do. David Hyde, owner of David Hyde and Associates, a Toronto-based national security consultancy, is frequently called in to conduct risk assessments for companies, all too often, after a traumatic incident. “On a personal and psychological level this is a very deeply searing type of incident. Some people can’t return to the workplace. I’ve dealt with cases where seven, eight and 10 years later there are still employees who are on long-term disability.” In one extreme example, the OC Transpo shootings claimed another victim months after the tragedy. A bus mechanic committed suicide after he failed to take the shooter’s threats seriously in previous discussions. “I feel guilty as hell for not telling anyone,” the suicide note read.

Hyde says Western Forest’s heightened security is a good first step in restoring a sense of safety and trust among its workers. Hyde virtually guarantees clues will eventually emerge that might have averted this tragedy. “In 99 cases out of 100 the research shows that there were different types of warning signs”—signs that too often seem obvious only in hindsight.

—Cara McKenna is a reporter for the Nanaimo Daily News