The Three Amigos made their pitch. Here's why you should care that the ‘spectacular’ butterfly is disappearing 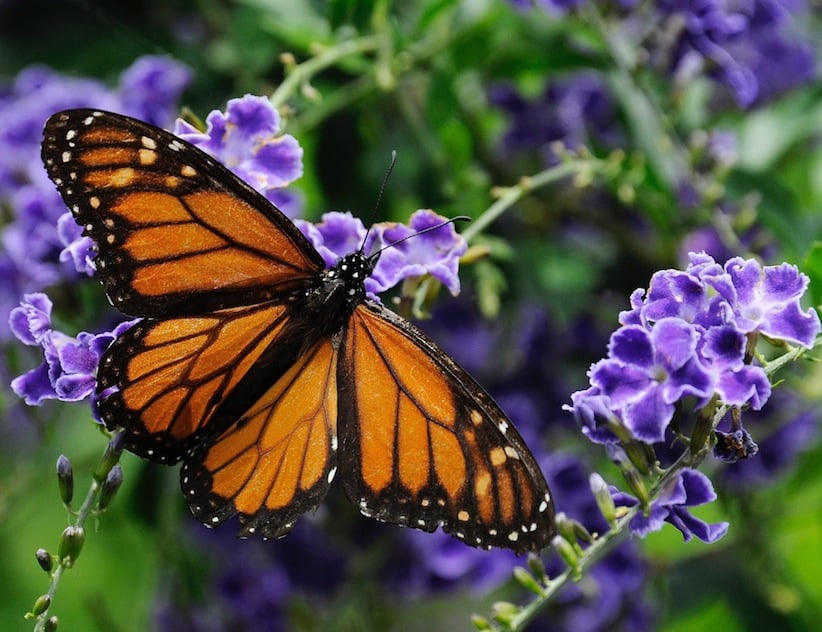 A monarch butterfly feeds on a duranta flower in Houston. (AP Photo/Pat Sullivan,File)

“They’re not just any species. They’re spectacular.” That’s what U.S. President Barack Obama had to say about the monarch butterfly Wednesday at the North American leaders’ summit press conference.

But why—amid trade, climate, and defence—were the leaders talking about butterflies? Because of Mexican President Enrique Peña Nieto, who, in his opening statement, compared the three countries’ relationship to that of the monarch migration. “This is a species,” he said, “in its pilgrimage, [where] we can see how our countries are intertwined.”

That’s one thing that makes the species “spectacular,” as Obama said. Apart from being beautiful in colour, the eastern monarch butterfly travels an incredible distance, thousands of kilometres, twice a year. Their life cycle spans all three countries. In the fall, they fly from Canada to Mexico to overwinter in the warm country, and in the spring, from Mexico to the midwestern United States and Canada.

At the last summit, in 2014, the Three Amigos promised to make a trilateral effort to preserve the monarch butterfly. That year, the species’ wintering ground only covered 1.6 hectares of forest in Mexico, a massive drop from the 14 it covered in 1993. The species’ population has declined by about 90 per cent in 20 years, and according to research that came out earlier this year, there’s a fairly large chance the monarch butterfly will go quasi-extinct—meaning there will be too few to repopulate—in another 20 years. Brice Semmens, the lead researcher on the report, said there’s around a 30 per cent chance of extinction.

Peña Nieto did have some good news to share, saying over the past winter, the wintering ground was over four hectares, and that he has a goal of bringing that figure up to six hectares by 2018. But Semmens said the fluctuation of numbers, while positive, doesn’t necessarily mean North America is in the clear. “There’s a lot of variability there,” he said, “and that variability in consort with the fact the population is declining, leads to a considerable possibility the population will bounce into a lower threshold where the population won’t recover.”

The population loss is attributed to a mix of things. For one, climate change: Ice storms in Mexico and drought in Canada has killed off thousands of butterflies. And two, habitat destruction: Both deforestation in Mexico and herbicide use on milkweeds in the U.S. and Canada. Monarch butterflies lay their eggs on milkweed, and the caterpillars eat the plant to protect themselves against predators; they need it to survive. “Milkweeds are not noxious weeds,” says University of Ottawa biology professor Jeremy Kerr, “they’re wildflowers and they’re useful.”

Kerr is on a team of people across Canada working to preserve monarch habitat. Mission Monarch—a joint effort by the University of Ottawa, the University of Calgary, Montréal Insectarium, and Environment and Climate Change Canada—is researching the current status of monarch habitat in the country, as well as informing citizens about what they can do to help.

“Plant milkweeds in your garden,” he suggests, “and encourage preservation of milkweed patches in other places.”

So why should you care? First, butterflies, like bees, are pollinators. And second, Kerr said, they make the world a better place. “If you are content to live in a world that consists largely of weeds and mosquitoes, then saving the monarch butterfly may not matter,” he said. “It adds something beautiful to the landscapes that we inherited from our parents. Letting those things just disappear means that the world we pass on to our children is just less interesting.”

The POTUS agrees: “We want our children and grandchildren to see them as well.”