Dennis King of P.E.I. on climate change, what's wrong with modern politics and how he narrowly missed his 'Gilles Duceppe moment' at the Calgary Stampede 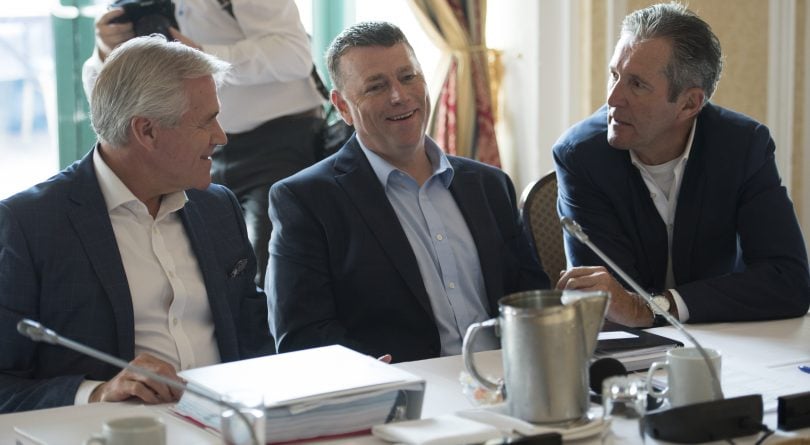 In April, Prince Edward Island became the fifth straight province to reject its Liberal or NDP government in favour of a more right-leaning party. But anybody expecting Progressive Conservative Leader Dennis King to join the anti-Trudeau, anti-carbon-tax movement quickly had their hopes dashed. King has kept in place his province’s carbon levy, while working collaboratively in a minority legislature where the Greens are the second-largest party. And while other Conservative premiers huddled with Alberta Premier Jason Kenney in Calgary ahead of the annual premiers’ conference, King met in Ottawa with Prime Minister Justin Trudeau.

Maclean’s spoke with King, a former communications aide who only won his party leadership earlier this year, about how his politics have taken on a different hue.

Q: Your legislature recently passed a Green private member’s bill to lower P.E.I.’s carbon emissions target to 43 per cent below 2005 levels, instead of 30 per cent. We’re not exactly used to seeing a Conservative-led government take a Liberal government’s target and accelerate it. What happened?

A: I just believe as an island province, we have to be very mindful of the changing climate and the impact it has. I think Prince Edward Island has always been a leader on issues like this. You just saw the change in our legislation to eliminate plastic bags [as of July 2019]. I just think this is one we can’t afford to get wrong. We have to work toward the ultimate goal of carbon neutrality, and have to be serious about how we go about doing it.

Q: Islanders might, unlike the rest of us in Canada, see climate change as less a future thing than a present issue. It’s already being seen and felt there. Tell me about Islanders’ unique experience and exposure to climate change.

A: We have a lot of changing weather patterns the last number of years. We have significant (coastal) erosion. Our seasons are changing to where the snowfall is coming a lot later. When we have high winds without the snow cover, we’re losing a lot of soil. We’ve been living a lot of these changes for the last number of years. It is here, with us, right now. That probably gives us a more unique perspective than some other jurisdictions.

Q: Many other politicians say Canada is such a small player in the global climate fight, it doesn’t matter much what we do. P.E.I. is even smaller; the numbers we’re talking 1.8 megatonnes out of Canada’s 716 megatonnes. Does that argument get bandied about a lot on the Island?

A: I suspect that becomes [mentioned] a lot. My own personal view has adapted and changed over the years as well. If you want to change the world, you change your part of the world. I don’t think there’s any grand expectations that if we meet the targets that the polar ice caps will stop melting or anything like that. But some might say Prince Edward Islanders are stuck in their way—if we’re open to exploring these changes and exploring the opportunities within, then I think it serves as a leader and a beacon for the rest of the country and the world. And at the end of the day, isn’t that what we’re all trying to do?

Q: Modern P.E.I. has never before seen a minority, and no province has had a Green Official Opposition. What’s that been like?

A: Well, it has been very very interesting, for sure. Islanders gave a clear mandate in the election of April 23, and that is they want all parties to work together, regardless of partisan stripe. That’s the attitude I had as a leader in the election. That’s the attitude I had my entire life. It hasn’t been without its challenges, but all government mandates are challenging, whether they’re minority or majority. Overall, we’ve seen probably seen the most collaborative government that’s ever been in the history of Prince Edward Island—creation of the Speech from the Throne, creation of the budget and the passing of both. My own view has always been that I don’t care where the ideas come from. If they’re good ideas, let’s turn them into good policy for Prince Edward Islanders. So I don’t really look at [the emissions bill] from the perspective of this is something that the Green Party put forward. It was an idea that was put forward that I think Islanders wanted to get behind.

Q: In speaking with people in opposition, I hear there has been a largely genial political discourse. There’s potential for this to be one of P.E.I.’s finest exports to the rest of Canada, which could dearly use it. How can other places import this?

A: I think what we saw during the election was a spirited discussion on ideas and policies. We didn’t see any of the personal nature. It was very kind and respectful. And while other provincial elections were going on that weren’t as kind, people took note. I truly believe in my heart this is the Island way, the way Islanders wanted us to conduct ourselves.

My advice, for whatever it would be worth, is that you can do it. The electorate in Prince Edward Island and the electorate in Canada is very engaged. And they’re more interested in your ideas and your approach than they are in you trying to point out the weakness in your opponents. When we look to our friends to the south, I think what we’ve seen is the polarization of political views to the point where nobody is listening anymore. Most people are in the middle. They want to listen. They want to be open to good ideas. And they want to be open to change their positions. So when we dig in so intently on a position without any flexibility to change, I think we’re actually tuning out the voters that we should be trying to attract.

Q: When you were elected, there was a sense across Canada that this is another player in the Blue Wave, in the “Resistance.” That decidedly hasn’t been your approach. Why?

A: I mean, what am I resisting against? Just because I share the same political colour or some of the same political philosophies with somebody else? The first test for me is: what does this do for Prince Edward Island? If people are resisting the [federal] low-carbon plan, well, that’s not something that Islanders are resisting, so why would I jump in at the front of that for the sake of doing it? I’ve never really seen that as part of my mandate. I have great respect for Premier Kenney and Premier Ford, and I fully respect what they’re trying to do for their provinces. It’s just different for me here.

Now there will be lots of things that come up over the course of my mandate I’m sure, where I will align with some of those individuals because we’re on the same plane. The federal-provincial relationship is probably one of the most important issues I deal with here. And the conversations or disagreements I have with the Prime Minister of whatever political stripe they represent will be because Prince Edward Island is being impacted, not because someone thinks I should be part of something because we wear a similar colour of jersey.

Q: On the Monday before the premiers’ summit, while other conservative premiers were flipping pancakes with Jason Kenney, you were meeting with Justin Trudeau. Forgive me for reading more into that than scheduling issues.

A: Look, every media outlet that I’ve talked to has asked me about this and whether it was a snub or picking one over the other. I have been trying to meet for a number of weeks with the Prime Minister. And we took the opportunity to do so. When I met in Saskatoon with all of those individuals who were at the Stampede, nobody thought I snubbed them. I talked to the Prime Minister about changing the transit envelope so that we can actually access the money for provincial transit that we can’t because the federal program is written to serve larger centres like Toronto and Vancouver. That to me is a $25-million potential project for Prince Edward Island. That’s far more important than Dennis King getting out to the Stampede, quite frankly.

Q: Doesn’t it bother you, not getting that white cowboy hat and getting to flip pancakes with the rest of the boys?

A: I don’t know if you Googled my image, but I wouldn’t look great in a belt buckle and a tight white shirt and a white hat. I could do without that picture.

Q: The Calgary Stampede secret is that nobody looks good like that. They all just pretend.

A: I’m pretty early in my mandate to have a Gilles Duceppe moment with the hat.

Q: Is that conservative cluster of premiers something you feel any need to be a part of?

A: I haven’t really thought deeply on it. We do practice progressive conservatism here that’s probably a little different philosophically than some of the other provinces. I would have joked with Premier McNeil from Nova Scotia and he would say that he might be further right than I am in terms of his philosophical thinking even though he’s a Liberal premier. In politics in Prince Edward Island, all four parties, we try to hug the middle; maybe I’m just a tad right of centre on some of my fiscal and financial beliefs as some of the others, but I’m not as sort of dyed-in-the-wool, far-right conservative as maybe some of my colleagues would be.