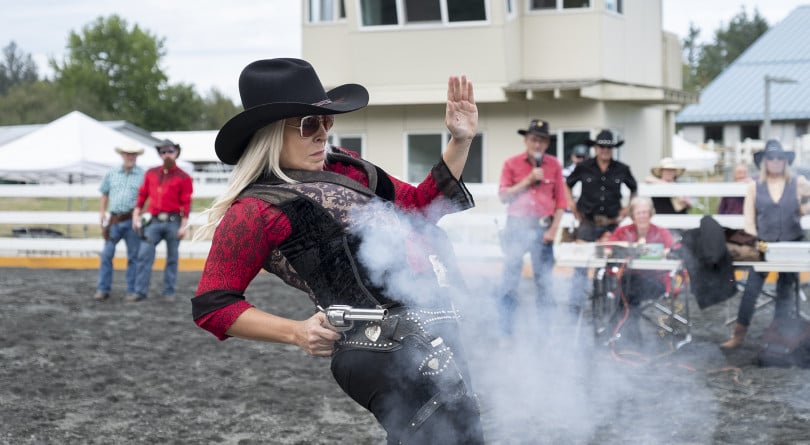 At the Comox Valley Exhibition, Nicole Franks stands in the centre of the rodeo ring. Wearing full western regalia, she faces what looks like a microphone stand eight feet away. The stand has a blue balloon at hip height and a light box attached to the top. The announcer asks whether Franks is ready. She pulls up each sleeve on her red-frilled top, brushes her blonde hair over her shoulders, and nods. She leans back, her left hand cocked above her studded holster. She’s waiting for the light to blink on, signalling her to shoot. As soon as it does, there’s a crack and the balloon pops. Black smoke issues from her drawn gun. The announcer tells Franks her time: at 0.39 seconds, she’s just outdrawn both of her parents, Bob and Peggy.

Neither they nor their daughter are surprised. Now 33, Nicole “Fastdraw” Franks ﬁrst gained recognition when she broke a world record at the age of 12, though she was unable to back it up with a second shot within 0.03 seconds of the ﬁrst, as is the rule in fast draw. She holds more than 50 records with the World Fast Draw Association (WFDA) and remains the women’s elimination eight-foot balloon record holder, with a shoot time of 0.26 seconds. 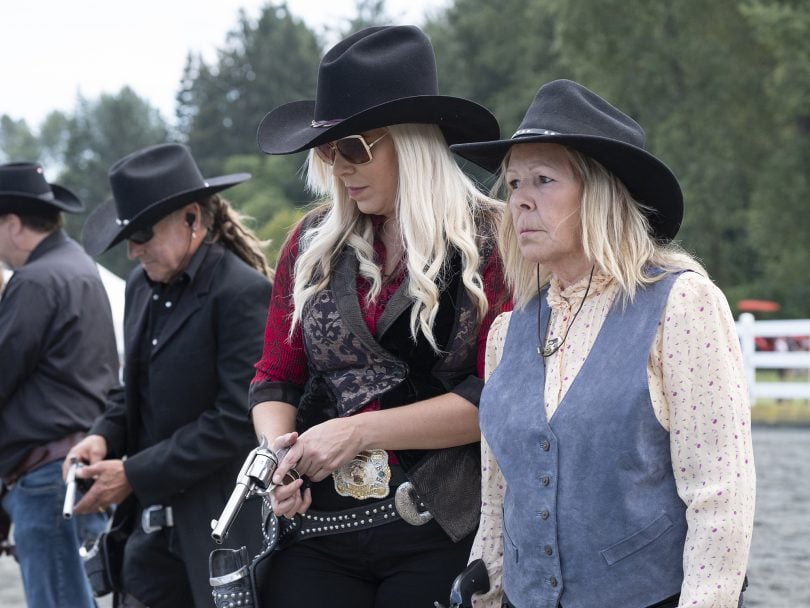 Nicole with her mother Peggy Franks, in Courtenay, B.C. (Photograph by Jen Osborne)

The prodigious fast draw family hails from Langley, B.C. Bob Franks joined the local Thunderbird Fast Draw Club in 1993 after poking his head in during one of their practices. (The WFDA doesn’t use live ammunition. Instead, competitors primarily use black powder blanks, in which a primer ignites the “kicker”—ﬁnely ground powder that in turn pushes out coarser powder. It’s this unburnt black powder that actually breaks the balloon.) Peggy was reluctant at ﬁrst. But after two years of cheering on her husband at meets across the continent, she too took up the sport—and now holds several WFDA records. Like her mother, Nicole initially didn’t have much interest in fast draw. So, at the age of 11, when one of her parents’ friends told her they’d signed her up for a competition, she had to borrow a pair of jeans and boots. The contest was the ﬁrst time she’d ever shot. “I obviously came dead last,” she remembers.

But the contest triggered something inside the competitive young woman. She started to watch the slingers with a more critical eye. At a contest in Calgary, she approached her father with an idea; instead of “poking” the gun out when she drew it, what if she pulled it back, closer to her body? “I said, ‘Nicole, if you can shoot like that, nobody’s ever going to beat you,’” Bob Franks recounts. He was right; on the weekend of her 14th birthday, Franks set 21 records in one contest in Oregon and then went on to set another 12 in Alberta the following year. 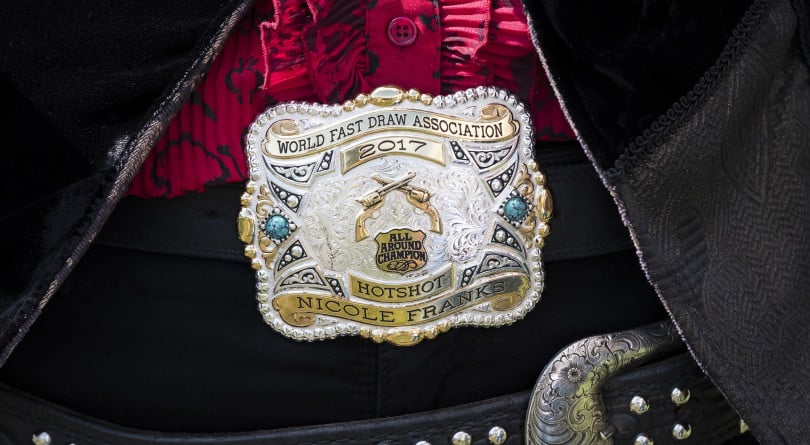 Not everyone toasted her success. “When I was a kid, it was very hard for men to see me,” she recalls. “Fourteen, Canadian and a female. The three things that weren’t very common for shooting guns.” While the men and women compete separately, Franks often had the best overall score. “Rules started to change because of me. They didn’t like the way I stood; they didn’t like how low I wore my holster.” Every time a new regulation conveniently appeared, Franks rose to the occasion. “I just kept going up there and shooting.” Her persistence helped her win the women’s all-around world championship for nearly 10 consecutive years and again in 2017.

While Franks collected her accolades, interest in the sport started to wane, its redolence of the mythic Old West giving way, it seemed, to growing concern about gun violence. Where she used to compete against a couple hundred competitors, she now typically faces 30 or so. “It got harder to travel with guns,” says Franks, a contract event organizer in her day job. “Regulations got tighter, which I think discouraged people.” To Franks, gunslinging and gun violence are entirely divorced. “Somebody once said to us, ‘What do you got for a weapon there?’ And we said, ‘What do you mean weapon? Oh, you mean my gun?’ ”

Under federal law, though, the difference between sports equipment and weaponry isn’t so clear: while some fast draw guns can’t carry a real bullet, many gunslingers also use stock handguns with black powder blanks. As such, any restrictions on ﬁrearms affect the fast draw community, regardless of the type of ammunition they use.

Stricter gun laws haven’t snuffed the sport out—if anything, they’ve forced competitors to get creative. There are WFDA shooters in Japan, where public ownership of real guns is illegal. Japanese slingers use modiﬁed guns made out of plastic and stand about two feet away from their balloons, which is as far as their blanks will shoot.

Meanwhile, in Canada, Franks continues to perfect her craft. “The draw is always the same,” she says. “So it’s your adrenaline. It’s your emotion; that’s what makes you faster.” And Franks needs that edge to continue to beat one of her toughest competitors: her mother.

This article appears in print in the October 2019 issue of Maclean’s magazine with the headline, “The quick and the deadly.” Subscribe to the monthly print magazine here.