A series of very-public missteps have lead to a terrible, horrible no good, very bad year for the giant coffee chain 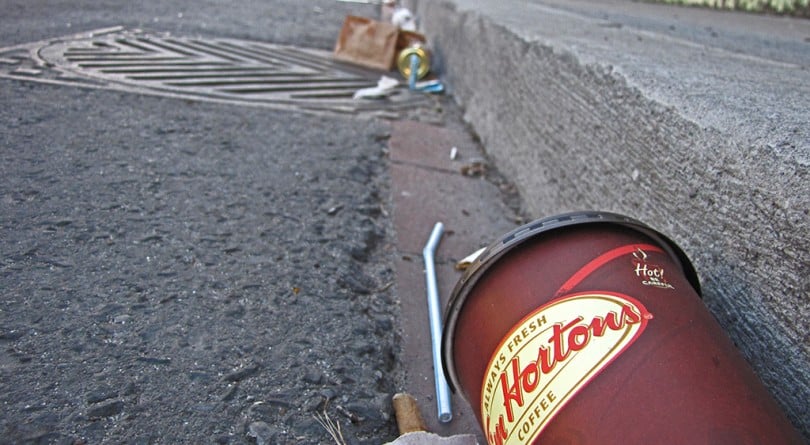 Here’s one way to put Tim Hortons quickly deteriorating reputation into perspective: Canadians think more highly of Loblaw’s, a company that recently admitted to being a major player in a bread price-fixing scandal that lasted for decades, than the storied coffee chain. When research firm Leger released its annual corporate reputation report Thursday, the survey found Tim Hortons was the 50th most reputable company among consumers.

Last year? It was fourth.

Timmies suffered the second largest drop for any company’s reputation score this year, according to Leger—trailing only Sears, which only managed to fare worse by filing for bankruptcy, liquidating all their stores, laying off nearly their entire staff and stiffing them on their pensions.

How on earth could did Tim Hortons—with their legion of rim-rolling Timbit hockey-playing Canadians—see its reputation collapse so spectacularly? Here’s how:

The revolt of the Great White North

Long-time Tim Hortons franchisees watched angrily as the company cut expenses over the last year. That was to be expected: the Brazilian private-equity fund 3G Capital which bought Tim Hortons in 2014 and merged it with Burger King to form Restaurant Brands International Inc., is renowned for slashing costs.

In the face of the cuts, a group of Tim Hortons franchisees banded together to form the Great White North Franchisee Association. They claimed the company was not properly using money the franchisees contributed for advertising, using cheaper products like Ice Capp plastic containers with walls so thin they crumbled with ease, and creating an unfair performance measurement system to make it easier to oust certain franchisees. Then the lawyers got involved.

With Great White North claiming to have signed on more than half of the country’s franchisees, the group filed a lawsuit in October with allegations of RBI’s “intimidation” and “bullying” (a claim the parent company called ‘unfounded’.) The franchisee group threatened to file a second lawsuit in February after it alleged “deficient IT practices” by the parent company had led to cash register outages.

On the other side, RBI accused Great White North of leaking confidential information and reportedly issued default notices to multiple board members of the franchisee association.

The whole saga continues to play out in front-page media coverage.

On Valentines Day, a group of protesters chanted outside a local Toronto Tim Hortons: ‘Hold the sugar. Hold the cream. Tim Hortons, don’t be mean.’

The anger stemmed from hearing about franchise owners Jeri Horton-Joyce and Ron Joyce Jr. (offspring of Tim Hortons’ co-founder Ron Joyce Sr.), who responded to an increase in Ontario’s minimum wage by rolling back their employees’ health and dental benefits. The Joyce’s also said they’d be getting rid of paid breaks.

READ: In a fight over minimum wage at Tim Hortons, the worker loses

Ontario Premier Kathleen Wynne called the owners out for “bullying.” Tim Hortons head office called the move “reckless.” The franchisee association, however, said that without head office reducing costs or increasing prices slightly, some locations simply had no choice but to cut back on employee perks.

“If you think it only hurts Tim’s in Ontario, you would be wrong,” writes Christian Bourque, Leger’s executive vice president, in the report. “It lost 17 points in Quebec right next door.”

And as the company tried to promote its “Roll up the Rim” giveaways that month, customers replied by asking if the prizes this year might include paid breaks and basic health benefits.”

Soooooo does this mean that the new Roll Up the Rim prizes at Tim Hortons will be TVs, trips, paid breaks, and basic benefits?

About the reno… how but just fixing the toilets?

In March, one month after announcing its fifth straight quarter or either flat or declining same-store sales, Tim Hortons announced a $700-million renovation plan to completely update the design of its locations across Canada. What’s not to love about a fresh look? Plenty.

Franchisees complained about the high cost of the renovations that would be incumbent upon them to pay, while customers complained that wanted to see far simpler fixes than a top-down renovation:

@TimHortons – what’s the point in renovating your stores when there’s absolutely no effort by your staff to clean them? Your lobbies are dirty and your washrooms are almost unusable. @TimHortons #TimHortons

Maybe, though, Tim Hortons’ troubles are simply the result of a long-standing customer complaint finally catching up with it: its stubborn refusal to do something about those awful, leaky lids.