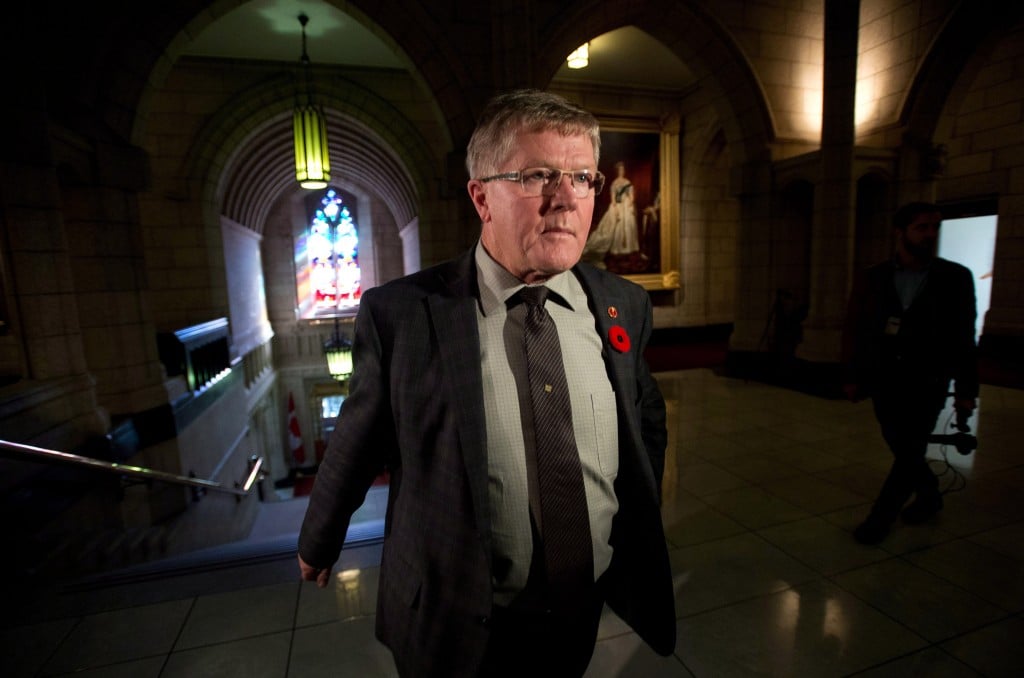 In a most ironic way, the federal transgender rights bill (Bill C-279), which has slouched its way—in one form or another—through Parliament for more than three years, was pummelled again late Wednesday afternoon.

During its clause-by-clause reading at the Senate, where the bill has been in limbo since 2013, Conservative Sen. Donald Plett (who has vehemently opposed the legislation since day one) proposed it be amended to preclude transgender people from entering “sex-specific” services and facilities that fall under federal jurisdiction such as crisis counselling centres, abuse shelters, prisons, military base changing rooms and washrooms. This means that any trans person denied access to these places (because of their gender identity) would not be able to file a federal human rights complaint.

Plett justified his amendment by calling on the oldest transphobic tropes in the book, saying it’s necessary to protect “vulnerable women” who could be re-traumatized by “being in the presence of a biological male” in such spaces, and against men falsely posing as women in order to sexually assault other women. “This act will no longer allow biological males who identify as female to gain unrestricted access to sex-specific facilities,” he told the committee.

Sen. Grant Mitchell, the Senate’s Liberal lead for C-279, told Plett his proposal is deeply troubling for transgender people. “So somebody who looks absolutely masculine, absolutely like a man and knows that he is a man, would be forced under this amendment to use a woman’s washroom, and that would be extremely unsettling,” he rebutted. Sen. Mobina Jaffer took Mitchell’s complaint further: “With the greatest of respect, I feel this is discriminatory, because we’re discriminating; trying to take away the discrimination and then you’re putting it back.”

Those in the audience and watching the livestream weighed in on Twitter. The hashtag #C279 exploded:

For every time a transgender person in Canada is lost to suicide, poor healthcare and poverty, I hope @DonPlett feels it. #c279 #cndpoli

“This in no way” hinders protection for the transgender community. Except — that this is basically the heart of the bill #C279

So the bill’s pretty much dead anyway. But Plett’s current amendment is pretty much just adding insult to injury.

Sophia Banks, a trans woman activist based in Toronto, was hopeful that the bill would finally move forward. “But at this point, there’s no federal bill that’s going to protect trans people. And Plett basically said we aren’t women. It’s depressing that the Canadian Senate does not believe that trans women are real, and that being transgender is real. It’s transphobic,” she told Maclean’s in a phone interview Wednesday night. She says even for trans people who have gender identity rights in their province, it’s not enough to fully protect against discrimination, particularly when it comes to things like passports, travelling by plane or train, and other federal services.

My ID in Ontario says I am a woman but my federal ID like a passport says I am a man. I can’t change that. My existence is fraud

First introduced as a private member’s bill in 2011 by Randall Garrison, the NDP MP for Esquimalt–Juan de Fuca, C279 would add “gender identity” to the list of grounds for discrimination found in the Canadian Human Rights Act, and would amend the Criminal Code’s hate crime and propaganda sections to prohibit such crimes being committed on the basis of how someone identifies their gender–whatever that might be.

Canada’s Human Rights Act, our federal equality law, ostensibly protects transgender people from discrimination, but does not say that out loud, said Noa Mendelsohn Aviv, director of the equality program at the Canadian Civil Liberties Association, who has made oral and written submissions about the bill to the Senate. I spoke with Mendelsohn Aviv on Wednesday night; she was disappointed by news of the amendment. “An important part of the bill was to make sure that people can use facilities that are appropriate to the sex that they feel they are,” she said. “Now, the message of the bill is a very strange one.”

She said this amendment has the opposite effect of what the bill was trying to achieve. “I think this is exactly how discrimination works, and how the process of equality works,” she said. “Those groups that are most vulnerable to discrimination have the hardest time even having their discrimination recognized. And I think that’s the juncture that we’re at with trans people.”

It will be at least another year before the legislation can get moving again, as it has been sent back for approval to the House of Commons, which likely won’t touch it before the summer break and federal election. As for Garrison, he’s still hopeful his plagued bill will one day make its way into law.

Until then, transphobia gets the last word.