Trudeau on saving the elderly from coronavirus: 'They fought for us all those years ago. And today we fight for them. We will show ourselves to be worthy of this magnificent country they built.'

The Prime Minister addressed the House of Commons before passage of the wage subsidy, saying Canadians' generosity of spirit 'was alive long before this virus reached our shores, and it will survive long after it's gone because it is who we are.' 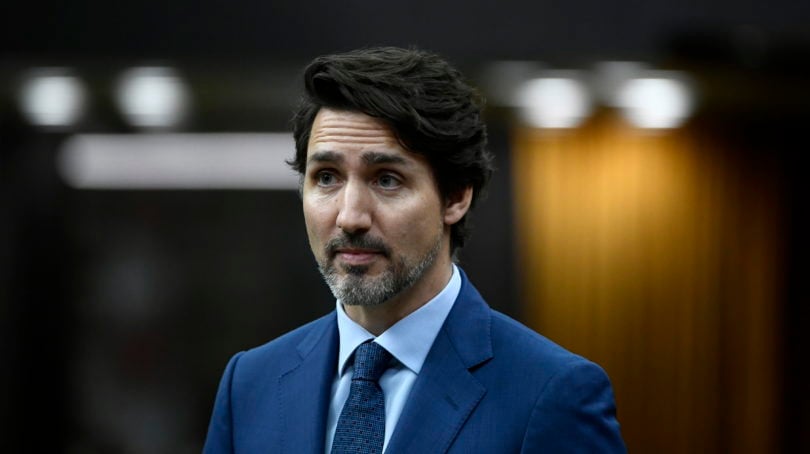 Trudeau rises in the House of Commons as Parliament considers measures related to the COVID-19 pandemic, on April 11, 2020 (CP/Justin Tang)

Prime Minister Justin Trudeau addressed the House of Commons on Saturday as it prepared to pass legislation to enact the ‘largest Canadian economic policy since WWII’:

Mr. Speaker, I rise here in this moment in this House as our generation faces its greatest challenge yet. We all stand on the shoulders of those who came before us. Of all of those Canadians who saw our nation through difficult, tumultuous times in our history.

[speaking in French] A hundred and three years ago today, young Canadian soldiers found themselves in the trenches in France, thousands of kilometres from home. The next day they mounted on Hill 145 and took part in the final battle for Vimy Ridge. Today, on the eve of this somber anniversary, we remember their courage and sacrifice. We remember those soldiers who shaped the country we know today.

Twenty years later, many were sent to the front again. On the evening of November 14th, 1940, my grandfather, the young MP for Vancouver North, rose in his seat to speak to the war effort, but first thanked all those senior members who allowed him to speak before them because his leave from the RCAF had expired that night and he was to ship out soon. Jimmy Sinclair would spend the next three and a half years in Europe and North Africa, far from his young family, far from his work in this House of Commons, and far from his constituents in British Columbia, serving his country in the best way he knew how. He  would return to the chamber in early 1944, a mere few months before D-Day, to exhort Canadians to continue with the sacrifices and efforts required to win. “This is the year which will decide a rapid victory or a long and protracted war. A year when our fighting men must be given every conceivable aid and support and encouragement by every man, woman and child in Canada, no matter the personal cost.”

These were trials that shaped our country and more, our citizens. And now, once again, we’re being tried. But Mr. Speaker, this is not a war. That doesn’t make this fight any less destructive, any less dangerous. But there is no front line marked with barbed wire. No soldiers to be deployed across the ocean. No enemy combatants to defeat. Instead, the front line is everywhere — in our homes and our hospitals and care centres, in our grocery stores and pharmacies, at our truck stops and gas stations. And the people who work in these places are our modern-day heroes. Separated from their family, risking their own health, they had to work every day so that we can eat, so that we can heal, so that we can do our part. Because every one of us has a role to play in helping shield our country from the threat it now faces. In hard times, courage and strength are not defined by what we say or do loudly in public, but by the actions we take quietly in private. Like staying home. Even as we stand apart, we stand united in our resolve to do what we must until COVID-19 is defeated.

[speaking in French] Mr. Speaker, we’re here today to enact the Emergency Wage Subsidy. This is the largest Canadian economic policy since WWII. This subsidy will enable Canadians to keep their jobs and get a pay check during this crisis. That is what we will be voting on this afternoon. This subsidy is based on steps that have already been taken to come to the assistance of Canadians, like loan guarantees to small businesses and the Emergency Response Benefit. Once again, here in the House we are called upon to support those in need. And I know we will not let them down.

Mr. Speaker, as Canada confronts this crisis, we are all called to serve, to fight for and alongside each of our fellow citizens, to fight for someone’s mother, for someone’s grandfather, for someone’s neighbour. Our job as Canadians is to uphold the dignity and sanctity of every single human life, whether they be rich or poor, young or old, ailing or healthy. That is our duty — without reservation, without pause, we must fight for every inch of ground against this disease. We must be there for one another as we spare no effort to safeguard our collective future.

[speaking in French] Over the coming weeks and months, we will face a number of obstacles. We will go through periods of uncertainty. Fear and uncertainty will continue to be a part of our daily lives. And unfortunately, together we will mourn the loss of loved ones. Even if we take every possible precaution, this situation may get worse before getting better. That is the sad reality our country faces. Our determination to put an end to this virus and our commitment to look out for one another will be put to the test. But I know that we are up to the challenge.

Canadians are among the most fortunate people on earth, despite the challenges we have yet to overcome, despite the wrongs we have yet to right, ours is a country where we look out for one another, where we take care of each other. The generosity of spirit and compassion, this was alive long before this virus reached our shores, and it will survive long after it’s gone because it is who we are.

[speaking in French] Mr. Speaker, our country is in mourning. Too many families have lost a loved one because of this disease. One of the greatest cruelties of this disease is that it denies us the opportunity to celebrate their lives and grieve among friends and family. On behalf of all Canadians, I want to offer my deepest condolences to those who’ve lost someone they love to this disease.

However, this holiday weekend also marks the coming of rebirth and new life. Easter is a time where Christians honour the passion, sacrifice and resurrection of Jesus of Nazareth and his teachings of compassion, forgiveness and love. Passover is a time when Jews recall the covenant made by God with the people of Abraham, Isaac and Jacob, Sarah, Rebecca, Rachel and Leah, and the heroism of Moses who led his people from bondage to freedom. Vaisakhi is a time when Sikhs and Hindus celebrate the New Year and the spring harvest. And even for those who are not celebrating, spring is always a time for renewal. These moments remind us that love, courage and fortitude are the antidote to despair, that there is no challenge we can’t overcome together. So let us make a solemn promise to each other this weekend, to do just that.

[speaking in French] Over the long weekend, let us make a commitment amongst ourselves to do what needs to be done for as long as it takes. And here in the House, let’s do our part to fulfill that commitment. Let’s take our responsibilities and come to the assistance of those in need.

Mr. Speaker, as I stand here today, I think of the young men who died taking Vimy Ridge. I think of the Greatest Generation who grew up during the Depression and fought through WWII. They showed us how to fight for what we believe in and how to sacrifice for what we hold dear. Today, across this country, the last members of this Greatest Generation live in nursing homes and long-term care facilities. They’re in their small apartments and the homes they built so long ago with their own hands. They are the ones most threatened by this disease. They fought for us all those years ago. And today we fight for them. We will show ourselves to be worthy of this magnificent country they built.

And for them and for their grandchildren, we will endure. We will persevere. And we will prevail.