Under B.C.'s dome of smoke and ash

After the months-long COVID lockdown, B.C.ers have been forced back indoors as yellow, sooty air swallows entire streetscapes 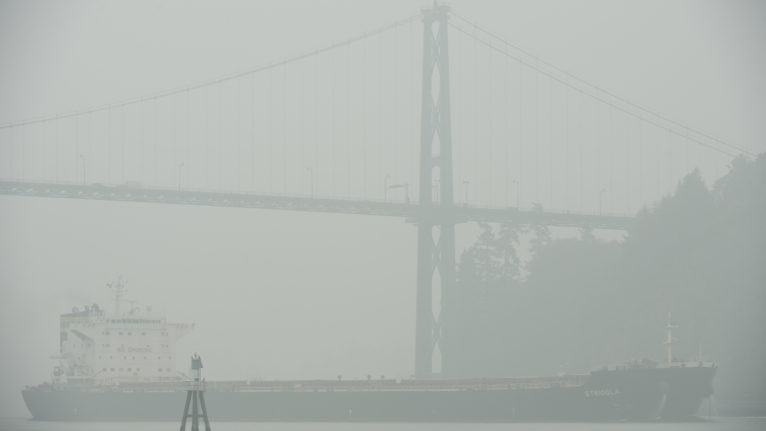 A ship comes through the smoky air under the Lion’s Gate Bridge in Vancouver. (Jonathan Hayward/CP)

In a province that relishes the outdoors, it’s hard not to feel trapped.

For about a week, wildfire smoke from California, Oregon and Washington state has hung over British Columbia, cloaking cities, valleys and all but the northern-most regions in an ashy haze.

While part and parcel of wildfire season, the smoke adds insult to injury this year with the threat of COVID-19 looming large. Where the outdoors once offered refuge to B.C.ers hoping to escape isolation, pollutant-laden air now threatens to drive them back inside.

Environment and Climate Change Canada first issued air quality advisories for the southern parts of B.C. on Sept. 8, when agency meteorologist Armel Castellan says air quality levels plummeted. In several areas along the southern coast, he explains, the concentration of particulate matter in the air was four times higher than what scientists consider safe, posing risks for the general public as well as those with lung and heart illnesses.

Before long, two-thirds of the province was on notice as the plume wafted north.

Although B.C. is no stranger to devastating wildfires, the province has had a mild season compared to its southern neighbours, who have seen blazes burn more than 20,000 square kilometres across three states and forced hundreds of thousands to flee their homes. (A pier fire that erupted in New Westminster on Sunday night might have offered a reminder of the risk when it destroyed part of a waterfront park.)

A week after the initial advisory, the sky over Vancouver still bore a dull yellow hue. At street level, smoke swallowed streetscapes and created a veil over the harbour, masking the North Shore from view. Downtown, pedestrians and cyclists appeared to be out in fewer numbers—many of them clinging to masks that offered little reprieve from contaminants hovering in the air.

“These are particles that are so small that they can make it into your bloodstream through your lungs,” Castellan adds.

The conditions prompted the City of Vancouver to open several, “clean air spaces”— indoor facilities fitted with filters to help those struggling with the smoke.

But not all parts of the province have been affected equally. The behaviour of the West Coast wildfires, along with changing temperatures and winds, have caused smoke concentrations to vary throughout B.C.

Some of the harder hit areas were found farther inland, in valleys that trap pockets of air and allow smoke to settle. Castlegar, a small city in the southwest corner of the Kootenay Rockies, saw the concentration of particulate matter soar to about 20 times the safety limit.

“It’s off the charts in terms of what we would like to see for an airshed,” Castellan says.

However, there is a favourable forecast on the horizon. By the end of the week, the meteorologist adds, air over the Pacific Ocean should begin to sweep out the stagnant smog, and finally give the province a break, and the breath of fresh air it needs.