Unlocking the mystery of Dr. Foth

Paul Wells: What would English Canada's most-read columnist have said about the Prime Minister's current predicament? Everything, and nothing. 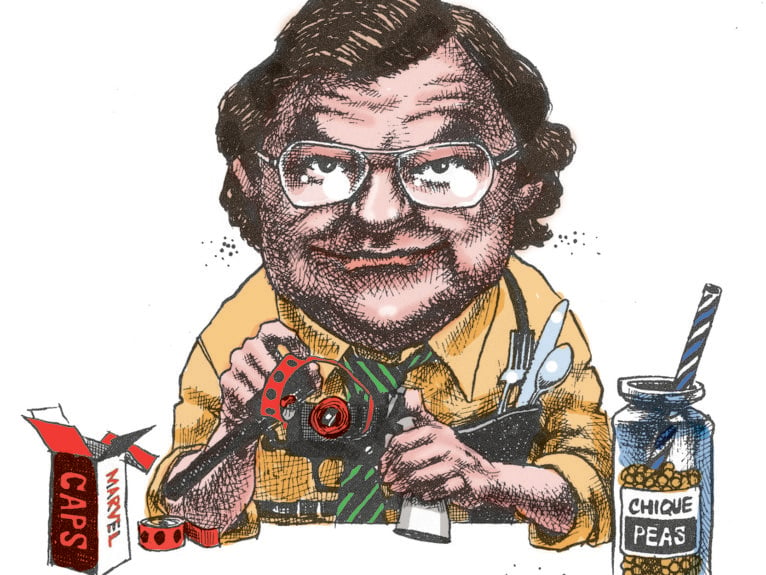 A caricature of Allan Fotheringham drawn by Aislin (a.k.a. Terry Mosher) in 1979, portraying the raconteur as an irascible scamp with a cap gun and pea shooter (Aislin)

Zowie, Dr. Foth, it certainly is great to bump into you.

I’m Wells. The good Doctor won’t be joining us any more.

Boy, I’ll say. But the rest of us need to carry on as best we can. Elucidate the specificity of the parameters of your phantasmagorical ignorance.

Adumbrate for me the radius and circumference of your existential befuddlement.

Chart with me the meridians of the chasm of your—

Knock it off. You’re not Fotheringham, you never will be.

Fair. How can I help you?

Well, gee, I’m wondering what Fotheringham would have said about the fix the Prime Minister is in.

Good question. It just so happens I’ve been reading a stack of old Fotheringham columns, and I’m pretty sure he’d have started with something super-pithy and surprising. Then he’d use your questions as guidelines while he spent the rest of his column expanding on his point.

The Prime Minister’s not in a fix. Everything’s unfolding exactly as he planned.

Wow. That sure is counter-intuitive.

I try. You see,what made Fotheringham the most-read columnist in English Canada for more than 25 years was his knack for making his readers feel like he was letting them in on the most closely-held secrets of the trade. As if, somehow, for the price of an issue of Maclean’s, you were getting the real skinny on how power worked in Canada.

How would he do that?

A sturdy expense account helped. In 1973, writing about the Quebec provincial election that was René Léveque’s last defeat before his historic victory, Fotheringham took care to sleep at the Bonaventure and lunch at the Ritz-Carlton. This is an iron-clad law of journalism: save on rooms, splurge on meals.

I’ll say. And bring a notepad. “The Café de Paris is the finest luncheon restaurant in Montreal, of its type,” he wrote. “It reeks European gentility. John Turner’s mother is there. John Turner’s sister is there.” Every name he drops is proof that he’s an insider and you’re right there with him.

So it was all smoke and mirrors?

Hardly. First of all, all these people—maybe not John Turner’s sister, but all the aides and factotums Foth would take care to name, the Jim Coutts’ and the Keith Daveys and the Bryce Mackaseys—they all spoke to him. They all read him. So his “let me walk you past the rope line” shtick wasn’t just for show.

But what was at least as important was that Fotheringham brought a hefty dose of horse sense to his writing. So he’d get big things right that other writers were getting wrong. That 1973 piece about Quebec politics carried the headline “Don’t Count René Out,” precisely when a lot of observers outside Quebec were doing just that. Fotheringham famously went on Joe Clark’s tour of the Middle East when Clark was the new opposition leader and the country was heartily sick of Pierre Trudeau. He spotted all the ways Clark was in over his head. (“This was market testing for a 60-day campaign. If so, the product was found wanting.”) He set the terms for public perceptions of Clark for a decade to come.

Thanks for yanking me back into the 21st century. These days that’s everybody’s explanation for every column they read: you’re criticizing my guy, so you must be in the pocket of the other guy. But after a careful read of 30 years’ worth of Fotheringham columns, I can’t see evidence that he had favourites. Well, he did have one: he liked Brian Mulroney early. But when Muldoon became Prime Minister, Fotheringham was so aghast at having his guy in power that he took an assignment in Washington for several years.

So he was a Tory then?

Not even. I think he just found Mulroney personally charming. Otherwise he didn’t much care which side was in power, as long as he could be ahead of his colleagues in reporting the league standings. On ideological fights—or, perish the thought, on policy debates—Fotheringham took no position. I suspect any discussion of the ends of politics bored him. Or he mistrusted claims about ends. Whatever a politician might think he was trying to do, to Fotheringham what he was really trying to do was win. And he greatly preferred discussing tactics to strategy.

So where would he be on Trudeau and WE?

Grandly uninterested. Not defensive or protective, but aloof. Right and wrong were above his pay grade and he’d make a point of reminding you of that. His turf was up and down, in and out. “Ask certain people if they hear anything current about Turner,” he wrote during the long period in the 1970s when the Liberals had Pierre Trudeau and wished they had John Turner instead, “and their eyes blanch, their jowls pale and there is a discernible jiggle in their martinis.” Nowhere in the column did he suggest Liberals were either right or wrong to yearn for what they didn’t have. All he was doing was watching the martinis for jiggle.

You didn’t answer my question.

Sorry. He’d have some anecdote about Trudeau’s childhood that he’d drop on the table as though it explained everything. In Fotheringham’s column, Joe Clark never left High River, Brian Mulroney was always cutting capers for American quarters in Baie Comeau, and Chrétien was forever the Little Guy from Shawinigan.

Lived at 24 Sussex until he was 14. Maybe he doesn’t live there today because he’s afraid the old man’s still haunting the halls. Something about how he’s Jimmy Sinclair’s grandson from Vancouver as much as he’s Pierre Trudeau’s kid from Brébeuf College. And once you’ve mentioned Vancouver, by God it’s a short jump to “Wacky” Bennett and Amor de Cosmos.

Names in Fotheringham columns, for all I ever knew. But meanwhile you feel like you know Justin Trudeau better, don’t you?

Actually, I kind of do.

That insider-y feeling was all I needed to keep coming back to Dr. Foth’s column every week when I was so young I probably wasn’t supposed to care about politics. Throw in a couple of nicknames and suddenly we share an inside joke about the powerful. Justin Pierre James Himself, to the manner born. Friend of swivel servants, scourge of Regressive Convertibles. Ask about him these days and the martinis jiggle discernibly in the Town that Fun Forgot.

I try to learn from the best.

Gee, Dr. Wells, thanks a lot. You’ve really managed to fuzzify the muddification.