An unusually posed photograph of Victoria and Albert done in 1854, 14 years after their marriage. Roger Fenton / Royal Collection Trust

Many Canadians may have the idea that Victoria Day is an internationally observed event that connects us — however quaintly and tenuously — with other remnants of the old British Empire as we collectively celebrate our colonial heritage by pulling up lawn chairs and raising a glass or a beer bottle to the tubby little Empress of Canada, India, Australia, Britain and points between.

Couldn’t be further from the truth.

Canada is the only country in the world to celebrate Victoria Day, and the ‘May Two-Four’ long weekend is as distinctively Canadian as the two-four — a case of 24 bottles of beer — with which it is often celebrated.

There is a Victoria Day in Australia — but it’s a completely different critter, a localized event marking the founding of the southern Aussie state of Victoria (as a separate colony in 1851) and it’s celebrated, coincidentally, on July 1.

Our Victoria Day does mark the real birthday of Queen Victoria on May 24, 1819, and Canada (then a rump colony called the Province of Canada) was the first part of the young queen’s ramshackle realm to officially recognize her birthday as a day of honour in 1845.

For the next 56 years the holiday jumped around — celebrated during Victoria’s lifetime on her actual birthday (regardless of the day of the week) with picnics, sporting tournaments, fireworks, torchlight parades and cannon salutes.

After Victoria’s death in 1901, her son and successor Edward VII kept May 24 as a holiday honouring the old queen but began celebrating his own “official” birthday in the middle of June (when the weather was better than his actual Nov. 9 birthday).

That was also the point at which Canada passed a law instituting the observance of Victoria Day on a Monday — May 24 if that worked out or the Monday immediately before if it didn’t. 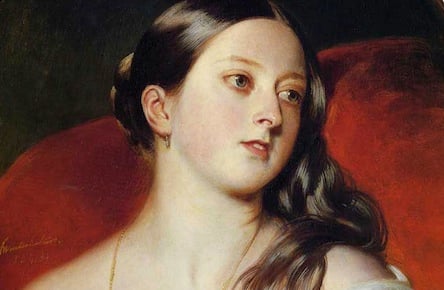 This languid portrait of the young Victoria with her hair down was painted by Franz Winterhalter in 1843 as a birthday present from Victoria to her husband, Albert. Known as “the secret picture,” it was kept by Albert in his bedroom and it was rarely seen by anyone outside the royal inner circle until it went on public display in 2009. From the Royal Collection Trust.

And thus was born the official May 24th long weekend. Most residents of Canada are entitled to take that Monday off to celebrate the arrival of warm weather and blackflies — even in Quebec, which dubs the holiday Journée nationale des patriotes.

Nova Scotia is the only province or territory not to designate the day a statutory holiday. Sad but true. Of course, Nova Scotia doesn’t count Thanksgiving or Boxing Day as  holidays either, so there’s a pattern of provincial parsimony.

Another Canadian invention — Empire Day — was also tagged on to the May 24 spot by Edward VII’s imperial decree in 1904.

Empire Day was the brainchild of Clementia Trenholme, an Anglican minister’s wife, who first got Hamilton, Ont. schools to mark the day with speeches, parades and writing competitions about the glories of the British Empire in 1898.

The idea quickly caught on across Canada and was picked up in England by Edward VII’s advisers as a way to promote continued support for the institution of monarchy in an age of increasing republicanism and revolution.

The next few kings — George V, Edward VIII and George VI —celebrated their “official” birthdays either on their actual birthdays or in balmy June like Edward VII.

Canada recognized those official events in passing but we continued to celebrate Victoria Day (with its attendant Empire Day activities) on the May 24 long weekend. It had become a distinctly Canadian tradition with increasing separation from anything happening in Britain or elsewhere in the world.

When young Elizabeth ascended the throne 60 years ago, the Canadian government decided to stop fooling around and, in 1953, made  “the Monday preceding May 25” the official birthday of Elizabeth II and all future kings and queens of Canada. A royal proclamation sealed the deal in 1957.

But that arbitrary official birthday is just a matter of convenience, signifying nothing. The only time Elizabeth was in the country for her official Canadian birthday in 2005, absolutely no formal events were held to publicly acknowledge it.

(At home in England, Elizabeth celebrates her own birthday privately with family in April and marks her grand official birthday on a Saturday in June like her father and great-grandfather did with the Trooping of the Colours, her Birthday Honours List and so on. This year it’s June 16.)

As for the tag-on Empire Day, it went through a long, withering decline parallel to the decline and fall of the British Empire it trumpeted. By 1958, the name was changed to Commonwealth Day. And in 1976, the date of observance by all members of the Commonwealth was changed to the second Monday in March — because that date had no particularly bad memories of exploitation or extermination for any of the former colonies.

Commonwealth Day is barely noticed anymore and Gibraltar seems to be the only member state that celebrates it as a holiday. Certainly not Canada.

But somehow, through thick and thin, Victoria Day has carried on.

Not a single Canadian alive today was born under the reign of Queen Victoria. Canada’s oldest supercentenarian, 111-year-old Merle Barwis (a Victoria, B.C. resident, of course) entered the world a month before Victoria left it, but Merle was born an American citizen in Iowa and came to Canada with her family a few years after Victoria’s death.

Victoria Day truly is a unique, idiosyncratic Canadian tradition. It’s as much a part of the Canadian national fibre as Canada Day — and an older celebration.

We can keep the Victoria Day name for old times’ sake. But since it now really celebrates the beginning of the Canadian summer season, May Two-Four is probably the more accurate moniker.