The Ontario city was the first in Canada to elect its municipal leaders without first-past-the-post. But was it worth the extra cost? 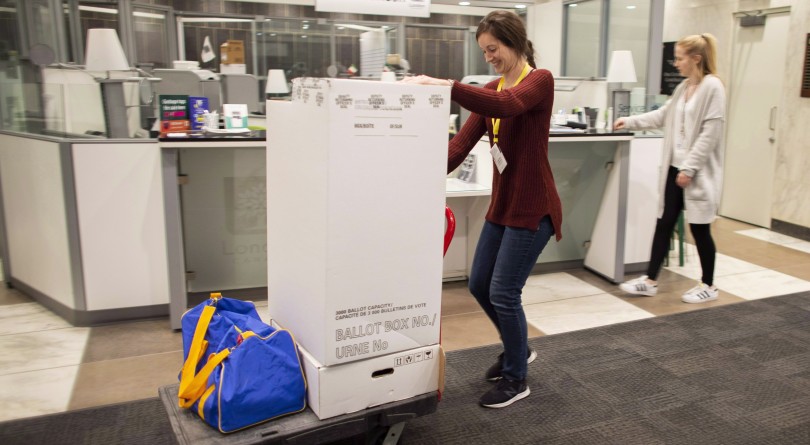 On the night of the municipal election in London, Ont., after the polls closed at 8 p.m. and the electronic tabulators rolled into city hall, there were few celebrations. The mayoral race was expected to be a close one among four front-runners, all of whom held quiet parties for their volunteers. On this evening, no winner was declared, so the excitement of election night was absent—or at least delayed. Londoners were told to go to bed: results from the new ranked-ballot voting system would take a day or so.

The tallying went on through most of the next day, in part because some of it was double-checked by hand, out of fear the machines might somehow mess up. “Cathy really wants to get it right,” one city employee said, referring to city clerk Cathy Saunders, who was overseeing the experiment. Nearly 19 hours after polls closed, Ed Holder, a former Conservative MP, was named the new mayor. On a Tuesday afternoon, in front of a modest crowd at the Central library in the city’s core, Holder declared it a “great day for London.”

For many, the experiment was worth the wait. On Oct. 22, the southwestern Ontario city became the first municipality in Canada to move away from first-past-the-post voting, taking a plunge Canadian cities and provinces have been debating for decades. A ranked ballot allows voters to pick a candidate as their first choice, with the option of ranking their second and third choices. If no candidate earns a majority of first-choice votes, then the person with the fewest votes is eliminated from the race and the ballots that ranked this individual first are redistributed to other candidates using the second choices. This round-by-round process is repeated until one candidate has 50 per cent of votes plus one. The idea is that it better reflects a community’s preference than declaring a winner on the basis of a mere plurality.

READ MORE: Why B.C. might actually get proportional representation this time

Canadians talk a lot about electoral reform, perhaps because their country is an outlier among democracies. Australia and Ireland use ranked-choice voting at various levels of government; American cities like Minneapolis, Oakland, Portland and San Francisco have also adopted the method. Proponents say it encourages more people from more diverse backgrounds to run for office, while dialling down the nastiness of political campaigns and discouraging the strategic voting seen in first-past-the-post. It can also thwart divisive candidates—like, say, Maxime Bernier, who lost the Conservative leadership race to Andrew Scheer in a ranked-ballot election despite leading until the final round.

In London’s case, Holder led from start to finish among 14 candidates, yet took fully 14 rounds of counting to surpass the threshold of 48,320 votes needed to win. Across all wards, every candidate who had the most first-choice votes after round one came out on top. Dave Meslin, an ardent supporter of the ranked system, came from Toronto to watch (he gladly missed out on voting in his own city’s election). “This is the first fair election I’ve seen on Canadian soil in my lifetime,” he declared.

For the past few months, Meslin, the creative director for Unlock Democracy Canada, a group that advocates for electoral reform, has been frequenting London and two other Ontario cities, Cambridge and Kingston, where referendums on whether to adopt ranked ballots were held the same night as London’s election. The option was made possible by the recently defeated Liberal government of Kathleen Wynne, who amended the Municipal Elections Act in 2016. Both cities approved of the system, but Cambridge failed to meet the required voter turnout of 50 per cent.

RELATED: The one thing that could bring back responsible government

Saunders was in charge on London’s election night. After city council voted 10-4 in favour of ranked ballots a year earlier, her team spent months educating Londoners about the new system, performing mock elections at retirement homes and other public places. “It’s not always great to be the first,” she says wryly, “but everything tested perfectly.” The city also paid more for the new technology, and for more ballots for the city’s growing population: nearly $500,000, almost double the cost of the last election.

Martin Horak, an urban politics professor at Western University, says the day was a “pioneering initiative,” adding, “London doesn’t have a reputation as a place that pioneers things.” He noticed civility among the mayoral competitors, but believes the city won’t see the full effects of the new process for two or three election cycles. And he’s not sure it signals a shift in Canadian democracy “unless we see a groundswell of popular support for a change of system, which I doubt.”

The new system certainly didn’t encourage more people to vote. Only 39 per cent of Londoners cast ballots, four points down from the last election. Chris Hawkins counted among those whose choices seemed unaffected by the change. “I knew who I was going to cast my vote for, and [I wasn’t] really thinking about two and three,” he says.

After Holder’s remarks, a supporter approached and asked: “Don’t you wish you got to celebrate in a ballroom like all the other mayors?” He grinned and promised he’d be celebrating that night. During the campaign, Holder had said he wouldn’t choose anyone but himself when it came time to rank his ballot; another mayoral contender encouraged supporters to only use their first-choice votes.

Still, the mayor-elect says he plans to assess whether the new system is worth keeping, and notes it “will be a collective decision, not mine.” At least some of his doubt was eased by the euphoria of victory: “When you win,” he acknowledges, “you have a pretty positive view of the outcome.”