What a downtown explosion says about Toronto's workaholic bankers

When a hydro vault exploded underground in Toronto's financial district, these Bay Street denizens simply would not leave their desks

An explosion billowed fumes through the street in front of their office, but investment bankers inside would not stop working. Police shut down a six-block radius, which was being emptied of people and filled with smoke that reeked of burnt plastic. When firefighters offered a choice to evacuate or take shelter, many toilers chose neither. “If the building was burning down, they would still stay up to either finish their conference call or their meeting discussing whatever they need to discuss,” says a man who works on the 66th floor, two below the top. “It could be too late.”

Toronto’s Bay Street covered the news Monday evening after a hydro vault combusted underground. Nobody was injured by the blast, but the fire, beginning at approximately 5:15pm, sent plumes of smoke through vents in the street, initially leading passersby to scream and run before a fleet of fire and police vehicles arrived on scene. The fire happened in front of Scotia Plaza, the global headquarters for the bank of the same name. Although maintenance and cleaning staff left their posts promptly, and the public was refused entry to the building, many bankers stayed put for hours—or stayed put, period—giving a glimpse into the sometimes dangerously diligent work culture in the country’s core financial district. 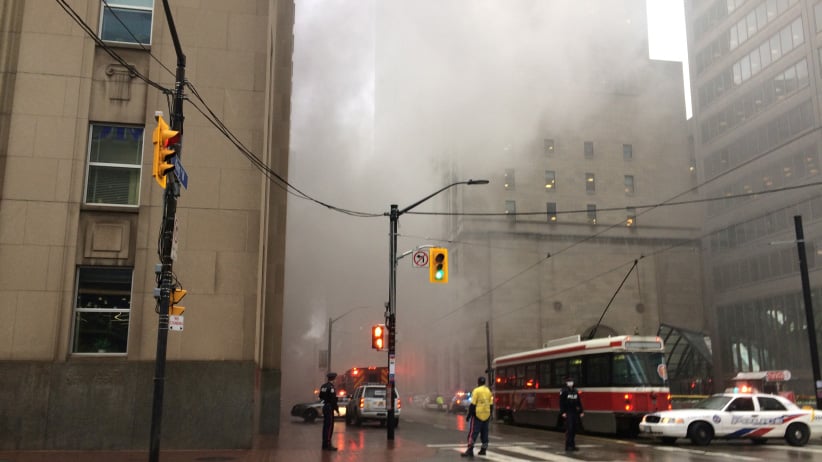 Smoke rises as police block off an intersection in the financial district after reports of a loud blast and heavy smoke could be seen in Toronto, Ontario, Canada May 1, 2017. (Jim Tanner/Reuters)

Sources who spoke with Maclean’s requested anonymity for fear of losing their jobs; where these suits have no name, we can identify them by the floors on which they work. “The smell is unbearable in there,” says Floor 66, who decided to evacuate around 7 p.m. “You have to close your nose and mouth to come down [the elevator].” Still, not everybody in his vicinity left. “One guy, he’s still up there plugging away.”

On Floor 54, another banker stuck to his post. “To be honest, I kind of ignored it,” he said at the end of the night, when an employee of Floor 24 of the nearby CIBC building finally took a break to eat at McDonald’s. Another colleague said that he saw smoke in the building, but instead of getting up to investigate, he stayed at his computer and Googled what was going on. During his break, he went down to the lobby, where he says, “they had fans blowing smoke outdoors … King subway [station] was closed. It was pretty bad. Break was over, so I went back up.”

Workaholism in the banking industry has been well documented in the United States—and at its most extreme in the 2013 film, The Wolf of Wall Street. But in Canada, work hours—extending to 3:30 a.m. to close deals with clients in Hong Kong, Vancouver and London—are simply accepted as the cost of doing business. Starting salaries for senior directors can exceed $150,000, but that depends on how hard the person works: “We pay for performance, so you are rewarded when you and the business succeed,” reads a note on a Scotiabank job board. Job descriptions include a telling caveat: “non-standard hours are a common occurrence.”

They’re uncommon, but fires aren’t new to Scotia Plaza. Floor 66 recalls a time the sprinklers went off in the building; the elevators were shut down and they were instructed to evacuate down three-score flights of stairs, but a group in a boardroom wouldn’t leave. “Even when people knocked on the glass,” he says, “they decided, ‘No, just leave us alone.’”

Monday’s fire didn’t spread above ground, but the smoke was still toxic. Some security guards donned masks over their noses and mouths, and pedestrians took round-about routes home to avoid the smell while their take-out Thai food got cold.

By 6 p.m., the cleaning staff began to leave. Emma Solano had recently spoken with her 27-year-old daughter and reassured her she was safe. Solano was scheduled to work until 10:30 p.m., but she said, “I want to go home. I’m not going to die for losing a few hours [work].” Another cleaner, Monisa Mahmud, left work so quickly that her co-worker was wheeling a vacuum cleaner down the sidewalk.

Bankers seemed to have different priorities. Lobby doors didn’t start revolving with men and women in suits until about three hours after the explosion. Just after an RBC location in the lobby of the plaza had been evacuated, three firefighters escorted a group of employees back into the bank on ground level. Clad with oxygen tanks and jackets dangling with carabineers, or business shoes, the group returned to the smoky site. They needed to lock the vault containing money.

At 11:30 p.m., cabs were still lined up outside the building for their regular routine of shuttling bankers home after dark. “Unfortunately, sometimes risks and dangers are put aside,” says Floor 66. “The Wolf of Wall Street—it really does exist … That pressure, that expectation is onerous. I don’t know what it is, really. It’s the nature of the job.”