What do you do with a maverick bison? Make him your town brand

Freddy the Bison refused to be fenced in, so the southern Manitoba town he roams turned him into a marketing asset 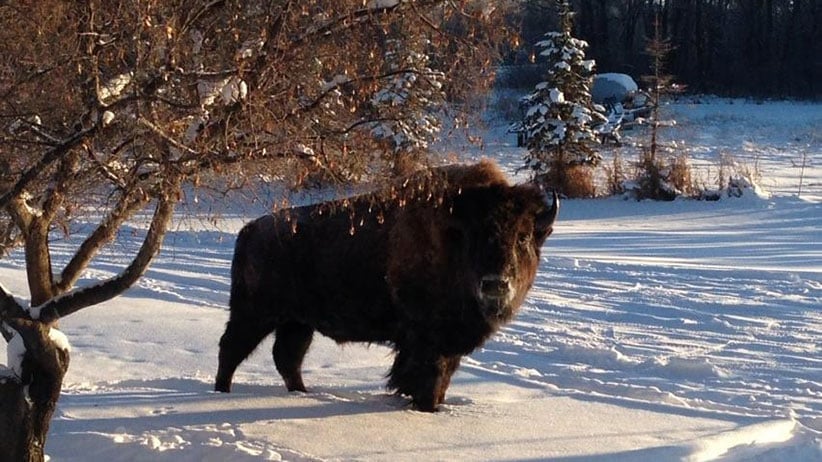 In Manitoba, small-town mascots represented by oversized statues include a turtle, a catfish and a mosquito. The little town of Lorette, however, has never had a representative from the animal kingdom. The municipality of more than 3,000, located roughly 30 km southeast of Winnipeg, doesn’t even have traffic lights. But in recent years, folks there have found themselves an avatar—one that has, from time to time, stared them in the face. For nearly two decades, a bison has been escaping the fencing of a nearby ranch. There are adults in the village who recall spotting the rebel buffalo from their school bus when they were kids. It was the most exciting part of their day.

In January, Kevin Patton finally gave the mysterious bison a name: Freddy. He’d coined it on Lorette’s Facebook discussion board, and what was once a minor concern for drivers navigating the highway became a celebrated character throughout the community. “The bison are out again,” one person alerted online. “Oh that’s just Freddy,” Patton responded. “He’s a rascal.”

Freddy’s owners, who manage a ranch just outside the town limits, shy away from the attention; they declined to speak with Maclean’s, though townsfolk who know them say they support the community’s enthusiasm. For now, no one seems driven to crack down on the bison’s wanderings. Some have suggested giving him a GoPro camera to see what he does in his spare time. Freddy, says Patton, has brought the town together like never before, is giving the community a sense of common cause.

The nascent drive to replace Lorette’s hockey rink—an “old barn,” in Patton’s words, that can feel nippier inside on a frigid day than the weather outdoors—is a case in point. It’s long past its prime. Considered one of the coldest in the province, it had become an unforgettable experience for out-of-town teams for all the wrong reasons. The complex was blighted in the past by mould, which management addressed by attaching trailers to the building to serve as dressing rooms. For more than 15 years, the community has sought a new facility. (Leading up to the last provincial election, the NDP promised to fund up to $8 million for a new one, but the pledge fell by the wayside after Brian Pallister and the Progressive Conservatives took power.)

Gary Hill moved to Lorette from Toronto four years ago and immediately recognized the need for a new community complex. Last April, he started an apparel company called Kustom Kutz. He frequently made shirts and hoodies for the local Dawson Trail Motor Inn, so in January, when the inn’s owner, Dawna Massey, asked for something with Freddy on it, Hill was all for it. These days, sweaters emblazoned with the words “Run Freddy Run” are worn proudly throughout town, and, in one instance, at a Winnipeg Jets game (a photo turned up on the town’s Facebook page). “We’re already thinking about doing a Freddy Day in the spring,” Hill says.

Together, he and Massey began fundraising by donating five dollars from everything sold with Freddy’s name on it. In the first month, they raised nearly $700. Modest to be sure, but their efforts have inspired similar initiatives throughout town. At Blooms ‘n’ Balloons, a local floral shop, owner Liana Boily sells Freddy-themed birthday cards and donates all of the proceeds to helping get shovels in the ground for the new rink. “It somehow makes the community feel more like a family,” she says.

RELATED: Bison back in Banff. Burgers, anyone?

Boily has noticed an influx of tourists coming to the community trying to catch a glimpse of the brazen buffalo; vehicles are known to slow down along the road where Freddy can often be spotted. In February, a local gym named Anytime Fitness got in on the fundraising by promising to donate $10 from every new membership. Boily recalls a visiting couple coming into her shop one day to ask if “Freddy” was a famous bodybuilder: they’d seen a sign across the street in front of the gym, proclaiming, “Freddy trains here, be like Freddy.” “It’s a bison,” Boily told the puzzled visitors.

Massey has been operating the Dawson Trail with her family for 12 years. The diner portion of her establishment, where her daughter works as chef, has been selling bison burgers—served with a dash of irony and the scorched silhouette of the animal on the bun—as another way to fundraise.

For locals who walk into her eatery, it’s almost become customary to ask: “How’s Freddy? Have you seen him today?” For now, Massey says, the mood in a place where not much was happening has transformed, giving way to a sense of positivity. “Whether that’s because of Freddy I have no idea,” she adds, “but I’m going to believe that it is.” As for when the town will erect a statue commemorating its new mascot, Massey can’t say. Perhaps after Freddy Day.