What trading P.K. Subban tells us about the city of Montreal

Martin Patriquin on how the Canadiens' trade of P.K. Subban has exposed every fanatic, ingrained facet of Montreal

Were professional hockey simply a sport of statistics and rote playmaking, the recent trade of P.K. Subban and Shea Weber would be a fevered debate only amongst those magnificent geeks who analyze such things.

Subban, who has played his entire professional career with the Montreal Canadiens, is an offense-minded defenceman with better per-game points at even strength. He recovers loose pucks and carries them out of the zone more often, generates more scoring chances and has a higher successful pass rate. He is younger and more expensive.

Weber, who has spent his entire professional career with the Nashville Predators, is a stay-at-home defenceman who has logged fewer penalty minutes, scored more goals and commits fewer turnovers. He is bigger and therefore more imposing in front of the crease or, as many hapless forwards have found out, in the boards. He possesses the fastest shot in the league.

On paper, at least, you have two very comparable hockey players, and the exchange between these two very different organizations is entirely within the purview of the teams’ respective general managers. On paper, at least, this trade is like any other: a consideration of the hard numbers, followed by a potentially disastrous leap of faith.

This being Montreal, and this being hockey, the trading of Subban is less business transaction than a cacophony of issues involving language, race, media, franchise loyalty and wounded pride. Within moments of the announcement that Subban would be leaving the city, the social media-fuelled consensus was that the Canadiens management had performed yet another monumental cock-up.

MORE: Who does P.K. Subban think he is?! (What hockey needs)

This was worse than the Chris Chelios trade for Denis Savard in 1990, or Patrick Roy for a bucket of bolts in 1996. “The P.K. Subban trade could be one of the worst in team history,” wrote hockey blogger Matt Drake.

It may well be—hence the leap of faith. But Subban, who is to defence what Guy Lafleur was to the right wing, was as much a beacon of hope for a team and a city as he was a hockey player. We Montrealers have been starved of the Stanley Cup for an unprecedented 23 years; over that time, we have developed a knack for self-flagellation that would make Woody Allen jealous. This dictates our rather fatalistic notion that the keepers of our cherished team exist only to keep it from greatness. 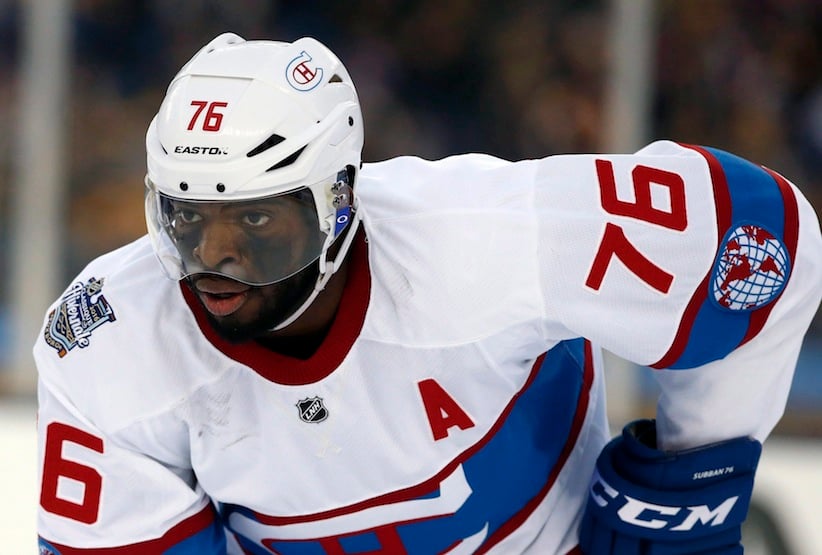 Montreal Canadiens’ P.K. Subban watches the action during the second period of the NHL Winter Classic hockey game against the Boston Bruins at Gillette Stadium in Foxborough, Mass. on January 1, 2016. (Michael Dwyer/AP/CP)

Subban wasn’t just great. He was an antidote to the often plodding dump-and-chase machinations of Habs coach Michel Therrien. In his seemingly meandering skatework around opponents, in those down-the-line explosions, or in his one-timers from the top of the circles, one could find proof that he was never not exciting.

In a city of historic linguistic ghettos, where language is a constant third rail, Subban managed to unite French and English fans. English media adored him. French media, not so much. “The fans are probably sadder than his teammates,” mumbled Journal de Montréal’s Réjean Tremblay in a typically tepid review of Subban’s abilities.

Subban lived to rebel. Guy Lafleur smoked in the dressing room and made disco albums in his spare time. Subban dressed smartly, celebrated goals loudly, and otherwise thumbed his nose at the team that paid him millions to play hockey. In a crowning indignity, Subban pledged to donate $10 million to a Montreal hospital without going through the Canadiens’ own charitable foundation—thus robbing the organization of the ensuing public relations bounce.

Then there is the issue of race. Subban did all the above while being a black man—certainly not the first in the NHL, but the first to have “performed his blackness freely,” as the CBC’s Adrian Harewood put it. With very few exceptions, professional hockey is played by (less conservative) Millennials but coached by and commented upon (more conservative) Baby Boomers. Was Subban’s exuberance more of a liability because he’s black? Or, to answer a question with a question: why, in the wake of a disastrous season, was the team’s best defensive weapon traded, while its coach was spared?

We’ll probably never know, which brings us to the final burden of being a Habs fan. There’s a certain irony, in the land of lapsed Catholics, that Quebec’s most cherished organization is shrouded in Vatican-like secrecy; one half expects to see a puff of purple smoke arising from the Bell Centre whenever Habs general manager Marc Bergevin makes a decision.

The Subban trade was a perfect example. A week before it happened, with legitimate sources saying Bergevin was making trade bait of his star defenceman, Bergevin came out to put an end to the rumours, saying he wasn’t looking to trade Subban. “”Yes, I’ve received calls on P.K.,” he said, “but I’m not shopping P.K. Subban, I can tell you that.”

Other teams—the Leafs come to mind—generally talk the fans and media through at least part of the decision-making behind a potential trade of its marquee player. At the very least, a GM in a normal hockey town would have addressed the years-old rumours about purported friction between Subban, team management and the dressing room. Not so in Montreal.

To be fair to Bergevin, though, we aren’t normal. We load our obsessions, dreams, hopes and frustrations on the back of exactly one team, and the strain must be unbearable at times. Yes, yes, I hear you say, we also have Canadian football and European soccer. We once had American baseball, and might yet again.

But really, though, all we have are the Habs.