A new report says Canada needs a unified approach between the provinces on online screening and testing, and that some patients might be getting bad advice 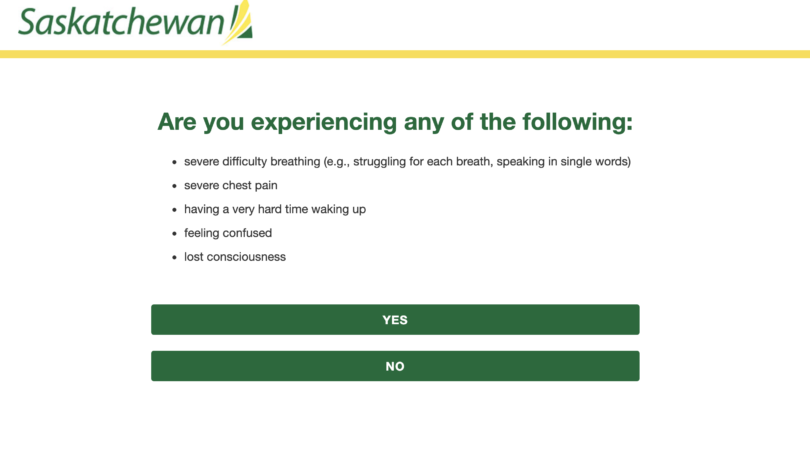 A screenshot of the Government of Saskatchewan self-assessment website

Canadians with symptoms of COVID-19 are getting contradictory advice from the screening websites set up by their provinces, according to a study from researchers at the University of Ottawa. Depending on where you live in Canada, you may be advised not to seek a test for the virus, even if you have symptoms, researchers have found.

This lack of a unified approach means that patients may get bad advice and that researchers and policy makers can’t rely on the information gathered, say the authors.

“It is alarming that in the middle of a pandemic that we are unable to see a co-ordinated unified approach between the provinces as pertains to screening and testing,” said Brieanne Olibris.

Olibris, a PhD student in the Faculty of Health Sciences, did the research by entering symptoms for four different prototypical patients into the self-assessment websites offered by all 10 provinces. All successfully screened for patients with two common symptoms, cough and fever, but otherwise the sites offered significantly different advice. Several provinces fail to screen for other symptoms, like headaches and chills.

“Even in a cross-Canada pandemic as devastating as this, there is not a single, evidence-based Canadian standard of care simply for self-assessment,” the study finds.

The screenings sites do not follow the COVID-19 definition published by the Public Health Agency of Canada on Feb. 6.

“To use a metaphor, not only have provinces wasted resources and time ‘reinventing the wheel,’ but some of their wheels are more oval than round,” the study says. “Most concerning is the fact that some provinces have developed their tools at variance with medical evidence, and these tools negligently furnish disinformation on a potentially deadly illness.”

In British Columbia, Saskatchewan and Newfoundland and Labrador, patients presenting chills and headaches, symptoms associated with the illness, “are given dangerous disinformation that they “don’t have any COVID-19 symptoms.”

If a doctor gave patients that information it “would be medical malpractice,” the researchers say.

Neither British Columbia nor Newfoundland and Labrador replied to an email from Maclean’s seeking an explanation for providing patients with what the researchers call “dangerous disinformation.”

Amanda Purcell, a spokeswoman for Saskatchewan Health Authority, said in an email that the screening website is regularly updated with the most recent guidelines.

“While the testing algorithms are complex, this is a simplified version for public, with direction to call HealthLine 811 for screening when the broadest criteria is met.”

The University of Ottawa researchers call on the federal government to “develop a single self-assessment tool for COVID-19 … which provinces should assist to develop and adopt.”

If the provinces will not co-operate, Ottawa should legislate to establish common rules, the authors say, pointing to the recommendation of the National Advisory Committee on SARS and Public Health established after the 2003 SARS outbreak, which killed 44 people in Ontario. The report, which led to the establishment of the Public Health Agency of Canada, found that governments bungled the response to the outbreak due to “the lack of a collaborative framework and ethos among different levels of government.”

The report recommended that in the event that different levels of government can’t co-ordinate effectively, Ottawa should act. “In the event that a co-ordinated system of rules for infectious disease surveillance and outbreak management cannot be established by the combined effects of the federal, provincial and territorial governments … the government of Canada should initiate the drafting of default legislation to set up such a system of rules.”

University of Ottawa professor Amir Attaran, who co-authored the research study on screening websites (and who has contributed to Maclean’s), said the federal government is ignoring the lessons learned from SARS.

“The report loudly stated that if Ottawa and provinces could not co-ordinate, which they have obviously failed to do, then Ottawa should legislate to make it mandatory. The time for pretty-please co-operation is over.”

Conservative health critic Matt Jeneroux said the Liberal government has failed to show leadership in the crisis.”We know that testing, tracing and isolating are key to defeating COVID-19,” he said in an email. “I’ve been pushing the federal government to show leadership and guide the provinces and territories in navigating through this crisis but that hasn’t been the case to date and quite the opposite as it seems to be the provinces leading the way in many cases. We are going to continue to push for more consistent messaging across provinces and territories, including guidelines for testing.”

“They highlighted the importance of having real-time epidemiological data on the spread of COVID-19. When we have inconsistent information and advice, Canadians get mixed messages and our ability to respond most effectively is hampered.”