Canada's Justice Minister says the law provides 'maximum flexibility' to health-care professionals who assess patients. But doctors are unclear on who qualifies for assisted dying. 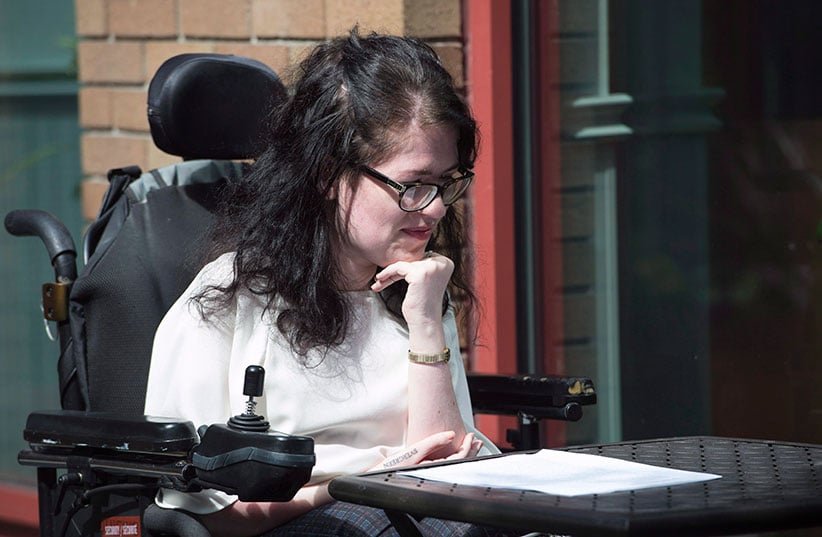 From the time it was introduced last spring, one of the most contentious aspects of the federal government’s assisted dying legislation was the requirement that in order to get a doctor’s help to end their lives, a patient must not only be suffering from a “grievous and irremediable” medical condition, but their natural death must be “reasonably foreseeable.” Critics of that clause argued it was unconstitutional, because the Supreme Court decision that struck down the ban on assisted dying did not limit it to those already near death. Julia Lamb, a 25-year-old British Columbia woman with a muscle-wasting disease, has already launched a court challenge to the law on those grounds.

In a backgrounder on Bill C-14, the Justice department noted that the legislation does not limit assisted death to people dying within a given timeframe, such as six months, but it does “require a natural death to be foreseeable in a period of time that is not too remote.”

Now, five months after the law came into effect, there is enduring confusion—among patients, their families and the doctors handed responsibility for assessing who qualifies—about what exactly that means and who meets that bar.

This week, Maclean’s published the story of Ruth Duffin, a 70-year-old Canadian woman who travelled to Switzerland in August to end her life because, once the law passed with the “reasonably foreseeable” criterion, she and her family and her family physician believed she was excluded. Duffin had Parkinson’s disease, and while she was suffering acutely each day, the disease wasn’t going to kill her “imminently,” which was the basis on which her family doctor declared she could not fulfill her request for assisted death, although she supported her wish.

Maclean’s requested clarification from Justice Minister Jody Wilson-Raybould’s office on the parameters and intent of that part of the legislation and received the following response:

“The criterion requiring that an individual’s natural death be reasonably foreseeable was carefully crafted to provide maximum flexibility to medical and nurse practitioners when assessing the overall medical circumstances of a patient, and does not impose any specific requirements in terms of prognosis or proximity to death. It therefore extends eligibility both to those with fatal diseases that progress rapidly and linearly, such as those with a prognosis of six months or less, and to those with conditions that deteriorate unpredictably over a longer period of time.
In addition, eligibility extends to those in situations where no single condition is leading to death, but where multiple conditions create circumstances that make death foreseeable over a period of time that is not too remote. It is important to note that, under the Act, eligibility is assessed on a case-by-case basis to reflect the uniqueness of each person’s situation.”

But with the legislation so new and the stakes so high, many doctors are confused about how to assess patients and apprehensive about interpreting the law too liberally. “There is very clearly uncertainty in the medical community—there’s no question,” says Jeff Blackmer, vice-president of medical professionalism at the Canadian Medical Association. “We’ve said all along that was going to be the case.”

RELATED: Jeff Blackmer on the burdens and ethics of assisted death

Although the federal government was careful to say there are no specific time limitations tied to the law, that’s a major issue doctors are wrestling with because it affects so much, he says. The language in the law has created a grey zone that’s interpreted differently by different physicians, Blackmer adds, and because this issue is entirely new in Canadian medicine, there’s little to fall back on. “In this case, we don’t have that established body of physicians with expertise who can say, ‘Our experience points in this direction, or these are the things we should take into account,'” he says.

Blackmer believes people with diseases such as Parkinson’s, Huntington’s and ALS, which will cause protracted declines but not be fatal for years, would qualify under the law; he’s always surprised when he hears those patients say they’re left out. “It’s still maybe a situation where because this is new and because some patients may fall into an uncertain area, there may be situations where local physicians, depending on a community, might not feel comfortable,” he says. “But physicians with more experience, who have seen more patients with these conditions, may feel more comfortable.”

That’s not what Nino Sekopet, personal support program manager with Dying With Dignity, has observed. The justice minister’s explanation of the intent of the law simply doesn’t fit with what patients are experiencing on the ground when he counsels them on their options and how to proceed, he says. “I wish that reality would support that statement, but everything I hear is happening in reality is very different,” he says. “Doctors are absolutely unclear about the timeframe around reasonably foreseeable natural death.”

In his experience, doctors are nervous to proceed with a brand-new law, so they consult lawyers who advise caution—leaving doctors “paralyzed” and patients without options. “There are some brave doctors who will read that criteria as something similar to what the justice minister named in her statement,” Sekopet says. “But most of the doctors really feel unsafe, insecure, and that makes them not do anything rather than promote some sort of action.”

He has a hard time imagining patients like Duffin travelling thousands of miles and spending thousands of dollars to access assisted death overseas, when the justice department is saying that service would be readily available in Canada to those same patients. “What that statement suggests or implies to me is somehow people are not doing their homework,” he says. “But in reality, they’ve been blocked from accessing that service in Canada.”

Shelley Duffin, whose mother travelled to Switzerland to die, believes the government should simply have enacted a law in line with the Supreme Court’s decision, rather than complicating matters with additional restrictions. “I find it somewhat offensive and disturbing to say it was ‘carefully crafted to provide maximum flexibility.’ No, it wasn’t,” she says. “If it was maximum flexibility you were looking for, you would not have put (in) a reasonably foreseeable criterion. You put this on people when they are at a time in their life where they are ill-equipped and least prepared to deal with what this clause will put them through.”

Sen. Kelvin Ogilvie, co-chair of Parliament’s special joint committee on physician-assisted dying, dismisses the statement from the justice minister as “absolute hypocrisy” and a “cynical attempt” to convince people assisted death is more widely available in Canada than it is in practice right now. The Conservative-appointed senator believes this interpretation serves only to make things more ambiguous.

Ogilvie is particularly frustrated by the mention of people with conditions that deteriorate “unpredictably” because he questions how a doctor could possibly assess and forecast that. “I will argue this is another cruel hoax that she’s perpetrating on Canadians, to give people hope that they might be able to end much longer-term suffering through medical assistance in dying,” he says. “And yet nobody will be able to interpret this for them.”