Why Ottawa can't have nice things

Stephen Maher: The Chateau Laurier is the linchpin of a historic capital city that Canadians can be proud of. Ottawa is about to wreck it. 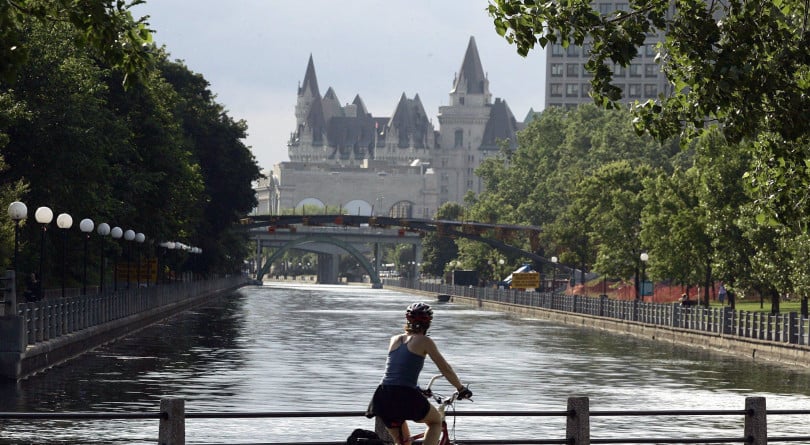 If you have never walked across the Alexandra Bridge to Ottawa from Gatineau on a sunny day, with the light sparkling on the Ottawa River below and the wooden boardwalk full of pedestrians and cyclists, you should try to do so.

For one thing, if you pay taxes in this country, you have helped pay for the beautiful buildings you can look at as you walk from one province to another, so you might as well come have a look at them.

Ottawa is the capital of a dominion, not an empire, so our capital doesn’t have the grandeur of London, Paris, Rome or Washington, but our ancestors left us some lovely buildings, ranged round a promontory more impressive than Rome’s Palatine Hill, on the banks of a rushing brown river more dramatic than the placid Seine or Thames.

The drama of the bluff, and the gothic romance of the buildings—with their spires reaching for the sky—make a strong impression, and they all cleverly echo one another.

To your left, as you walk toward Ottawa, you can peer up at a big statue of Samuel de Champlain holding his astrolabe aloft. Champlain, the first European explorer to travel up the Ottawa, gave the Rideau River its name, because the falls where it meets the Ottawa, downriver a bit, resembled drapes.

The Rideau Canal is on your right when you make landfall in Ontario. If you like, you can walk down the path by the river’s edge to the five 19th-century locks, with their old-fashioned cast iron cranks that the lock masters use to open and close the big oak doors when they lock pleasure boats up and down.

The locks were built for war, not for pleasure: their construction was an enormous task—at the cost of about 1,000 lives—after the war of 1812, to allow the British to move troops back and forth from Montreal to Kingston, so that the Americans wouldn’t be able to sail across Lake Ontario and catch us napping.

That’s why Ottawa is where it is. It’s hard to recall now, but the Americans, who now treat us with the greatest of respect, seemed to then want to swallow us whole, just as they eventually swallowed much of Mexico.

Ottawa, with its canal link to Kingston and its riverine link to Montreal, was far enough back from the border to provide strategic depth, so it was here, on a wooded bluff above the canal, that in 1859 the British built a gothic revival Parliament Building with a tower in the middle, which burnt down in 1916, at which point the young country built a better building, with a Peace Tower at its centre, to honour the dead of the First World War.

Atop the tower there’s a big maple leaf that flutters in any kind of breeze, so high above the river below that you can’t help but crane your neck upwards.

The only part of the building that wasn’t lost in the fire was the Library of Parliament, a spectacular stone circle, spired and buttressed, which still stands at the back of the Centre Block, overlooking the river, where you can admire it from the bridge.

Later buildings—the National Gallery, the Supreme Court building, the Museum of History in Gatineau and the Chateau Laurier hotel—all pay architectural homage to the Parliament Buildings, and it is delightful to stand on the bridge and look at them all and reflect on the wisdom, industry and taste of the people who made them all for us to enjoy, each subsequent building honouring those that were raised before them.

Ottawa is a dull, bureaucratic city—the town that fun forgot—but it has its pleasures. It is civilized, pretty, well-organized, with nice paths for walking, cycling or running along the canal and river, and good restaurants and museums.

The Chateau Laurier, which overlooks the locks, linking the ByWard Market to the parliamentary precinct, feels like the linchpin of the whole thing, a romantic railroad hotel where they serve high tea on Sundays, where party leaders deliver policy speeches to lobbyists, where dull conferences and glamorous galas are held, and where visiting grandees can stride the marble floors and admire the beautifully mounted portraiture of Yousuf Karsh, the great photographer who made his home in the hotel.

The Chateau must have been better before the town fathers decided to move the train station, which was across the street, out to an empty field five km away, but it remains the vital hub of the capital, a pleasant place to have a drink and see who is passing through town.

But Larco Investments, the company that owns it, wants to put a horrible seven-storey addition on the back, adding 147 new hotel rooms and more meeting rooms.

The company has been working with the city since 2016, quibbling with city staff over architectural details. The most recent submission has won tentative approval from the staff, who have been seeking, and winning, concessions from Larco. 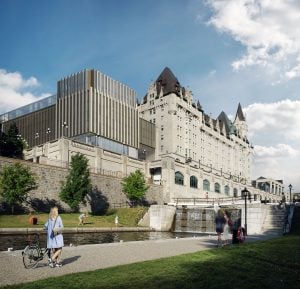 Now the plans are headed to city council, which can approve them, just as they normally approve big box outlets in Kanata once the traffic issues are sorted out, and the beautiful historic space at the heart of our capital will be permanently damaged.

Larco’s proposal resembles a computer heat sink or an air conditioner. It is in the bland modern style commonly used in condo developments, which people seem to like well enough, likely because it is close to a complete absence of style, a utilitarian commercial aesthetic perfectly appropriate for utilitarian commercial buildings.

It is entirely wrong, though, for the romantic skyline at the core of the capital, and it will wreck the experience of walking through Major’s Hill Park to Parliament Hill, and mar the lovely view from the bridge.

It is not, like I.M. Pei’s amazing glass pyramid at the Louvre, a jarring modern adornment, brave and revivifying. It is just a cheap, ugly afterthought, which looks to have been designed to please accountants.

It says something bad about Ottawa that bureaucrats are blandly paving the way for a seven-storey radiator grill to be attached to the most important hotel in Canada, and although the public is unhappy, no politician except local councillor Mathieu Fleury is saying much.

Mayor Jim Watson is unenthusiastic but is not inclined to get involved. Fleury is not on the planning committee, which will decide in June whether to approve it or not, and he is afraid that it will be given the thumbs-up by councillors from distant suburbs who are accustomed to rubber-stamping big box stores on the outskirts of town so long as the developers have ticked the boxes presented to them by city planners.

If they do that, and let the Chateau be wrecked, they will be squandering our inheritance from our forebears, either because they can’t see the difference between beauty and ugliness or they can see the difference—how can they not!—but don’t see that kind of aesthetic judgment as part of their mandate.

And that’s why we can’t have nice things.