The longer the Alberta NDP are in power, the harder it will be to repeat the shocking victory that won them the province 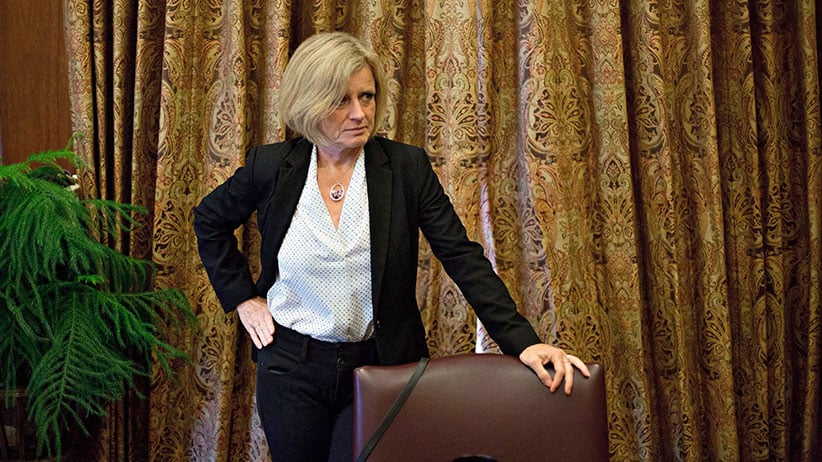 Striding out of Banff Trail School, Todd Strong expressed pride in what he’d just done. The Calgary massage therapist had voted to end four decades of Alberta Tory rule, and the power grabs that had come to deﬁne it. He’d voted for the right-wing Wildrose Party in 2012, but in 2015 chose something novel: the NDP, led by the likable Rachel Notley. “It’s a new option,” he said.

Two years later, Strong is still proud he voted for change. And he’s itching to do it again. He’s unhappy with “dumb policies” like the carbon tax and an energy efﬁciency program in which installers made house calls to change light bulbs and shower heads. “I didn’t realize they were going to do that when I voted for them,” he says. When he marks a provincial ballot in 2019, he’ll again determine which party’s the most likely government-slayer.

Notley’s party vaulted from four seats to a shocking 54-seat majority because more than 477,000 Albertans broke habit like Strong did. More than halfway through its term‚ and still generally ﬁelding more blame for the now-bygone economic plunge than credit for the current recovery, the New Democrats’ two right-wing opposition rivals have merged into the United Conservative Party (UCP), and will pick a leader by October’s end. Whether they crown federal cabinet veteran Jason Kenney or former Wildrose chief Brian Jean, it may not matter: based on the current mood, converting enough ﬁrst-time NDP voters into second-time voters will likely take another miracle, a reversal of fortunes as dramatic as the one that ﬁrst brought Notley into power.

Lola Zbukvich of Sherwood Park, Alta., is among those with regrets. “I thought if I voted NDP it would scare the Conservatives, but they’d still win,” she says, enjoying sun beneath the palm tree of her seniors’ complex atrium. “I didn’t think that everybody else was thinking the same way I did.” Zbukvich can’t say she’s seen much change for the better, and what improvements she’s aware of, like the carbon tax, she dreads as adding to seniors’ cost of living. “Groceries become so expensive, sometimes we go without,” she says.

Sherwood Park is a large bedroom community east of the Edmonton region’s massive oil reﬁneries. The NDP’s 2015 sweep of the traditionally NDP-friendly Edmonton extended to every urban and semi-urban riding on its outskirts, where it had little historical support. Having captured six per cent of votes in the Sherwood Park riding in 2012, the NDP hit 52 per cent last time. That surge’s beneﬁciary, MLA Annie McKitrick, says sometimes ﬁrst-time voters will praise the party’s performance. But often they’ll say they’re unhappy. “It’s hard to read them and it’s a lot of people who don’t really know what they want,” she says. “They wanted to give a lesson to the PCs. I feel sometimes whatever we do is not going to be good enough for them because we’re NDPers.”

Patrick Becker explains across his kitchen counter that he and many fellow crane operators backed the NDP’s jobs pitch, and its belief in reﬁning oil within Alberta. He was laid off in the spring, as the NDP balked at investing in Phase 2 of a nearby bitumen upgrader at which he worked. (The Tories had backed Phase 1.) With no other resource megaprojects needing his crane work, Becker is driving a concrete truck for half the pay. “They said they wanted to create jobs, keep jobs here,” he says. “The biggest mistake I ever made was voting NDP.”

READ: Rachel Notley takes on pipeline critics—even if they’re from her party

Free-market Conservatives may be even less likely to help subsidize Becker’s old project. But to many in Sherwood Park, the NDP hasn’t been kind to the energy sector. Many families have been stung by job cuts since 2015, after oil prices plunged and NDP reforms began. Becker is part of that hard-to-peg political breed who voted Alberta NDP and roots for Donald Trump. “He said he was gonna put America ﬁrst, and he did.”

Trump comes up in Alberta politics chatter in a northeast Calgary home too, but differently. Iti Misra, an accountant for an oil ﬁeld service ﬁrm, didn’t vote NDP but is baffled that her city and riding did; 15 of the 23 seats went Notley’s way. She reckons that like U.S. voters, Albertans were fed up with the old system. “People wanted a disruptor,” she said. “They wanted a change, but now everyone is bashing their head against a wall.” Misra thinks they haven’t done badly, but says her sector ﬁnds the new government tough to deal with and slow to understand issues.

Misra lives in Calgary—McCall. It had the province’s most dramatic NDP swing: a vote share 14 times greater than in the previous election. At Misra’s voting precinct, zero voters in 2012 grew to 48 in 2015, enough to eke out plurality in a four-way split. Retired civil servant Jack Godfrey was one of those 48, switching from the Liberals. He’s amazed he’s lived to see the day the NDP won Alberta, but thinks they lack experience. He’d be stunned if they’re not wiped out next time. “We’re predominantly free-enterprisers,” he says.

The New Democrats’ improbable sweep also included nine rural seats around northern Alberta. In Whitecourt—Ste. Anne, Oneil Carlier didn’t even have orange lawn signs with his own name until the campaign had nearly ended. He is now the agriculture minister, roasted province-wide for his government’s controversial farm safety bill and recent delays to agricultural society grants. “As those jobs start coming back, I’m conﬁdent people will come to realize it’s because of our policies,” he says. On highway repaving and repair projects throughout his district, government signs show not only the cost but the number of jobs taxpayer dollars have “supported.”

Carlier, who lives in the rural district but had spent the past 12 years as an Edmonton-based union administrator, was largely unknown in the riding. He’s now known mainly as a nice guy. “But this is so far beyond him; he’s out of his element totally,” says Dale Krasnow, the mayor of Onoway, Alta., a 1,000-person town 60 km northwest of Edmonton.

On a midweek afternoon at Onoway coffee shop O How Sweet It Is, there are no admitted NDP voters. “But my husband did!” offers owner Tracy Crispin in disbelief. Sitting at a table near a plaque that reads “bulls—t corner,” Ted Latimer says the minimum wage hike is hammering businesses, the coal plant phase-out will shut jobs and the new workers’ compensation requirements for farms are onerous.

Just outside town, accountant Patricia Fish, a self-professed environmentalist and “water warrior,” says she feels fortunate to ﬁnally have a premier whose values she trusts. She hopes voters appreciate that a party can’t ﬁx everything in its ﬁrst term. But she hears the grumbles from some of her clients. “Everything goes through the ﬁlter of money—does it make money or not?”

READ: Rachel Notley: ‘We reject the politics of austerity’

David Climenhaga, an NDP-friendly blogger, expects the rural vote is “almost certainly” lost, he wrote in August. “New Democrats will be lucky if they salvage three or four rural seats.” Even if some rural ridings become urban in redistricting, that’s a serious chip off a party that needs 44 seats to keep its majority and has many ﬁrst-time wins to protect.

Skeptics and NDP boosters will dismiss this string of anecdotes as misleading “anecdata.” Except that it matches the available data, too. In all but one poll since the last election, the NDP was trailing and sometimes placed third behind the Tories and Wildrose. Two polls since July’s United Conservative merger show that party well above 50 per cent and the NDP around 30 per cent, getting clobbered. Janet Brown, a Calgary-based polling consultant, sees a “complete rout”—75 UCP seats, and the NDP almost obliterated outside Edmonton.

Numbers could shift when there’s an opposition leader in place, but “it’s really hard to see the road to victory,” Brown says. “It’s not just about the economy recovering, but seeing that the NDP was responsible for it.” The unemployment rate is off 2016’s peak but was still 8.1 per cent in September, and two years of forecast economic growth doesn’t fully offset the past two years of shrinkage, whether or not the NDP deserves credit for either outcome. Notley and allies swear their programs and infrastructure spending have paved the way for the growth, and warn at every opportunity of brutal cuts from the other side, but the message can prove a hard sell. “I’m realistic that sometimes the best arguments will not change a person’s mind,” says McKitrick, the Sherwood Park MLA.

Notley also keeps stressing the tolerance for gay and transgender Albertans, and the other side’s social conservative leanings. Fears of cultural intolerance helped erase a Wildrose lead in 2012, though the PCs then enjoyed a booming economy that the NDP might not in 2019.

Back in Sherwood Park, air monitoring technologist Jeff Cooper reckons he’s in the minority of ﬁrst-time NDP voters open to giving them another shot. “Depends on how far to the right the conservatives go,” he says. He’d rather have a ﬁscally conservative but socially moderate choice, and that could soon arrive.

In recent weeks, two MLAs have quit the UCP caucus because they felt it abandoned the centre, and a Calgary NDP member left because of polarization as well. They could join forces with the one member of the centrist Alberta Party, as could a movement of Red Tories who feel homeless after Kenney’s party takeover. They could play spoiler either way, splitting the anti-NDP vote or the pro-UCP vote.

In either a two-way or three-way ﬁght, Notley’s NDP will need a big UCP stumble or some other drastic upheaval to have any shot at re-election.