Why we're honouring exactly 66,349 Canadians who died in the First World War

Even a century later, it’s difficult to say how many Canadians died in the Great War. Here’s how we determined our number. 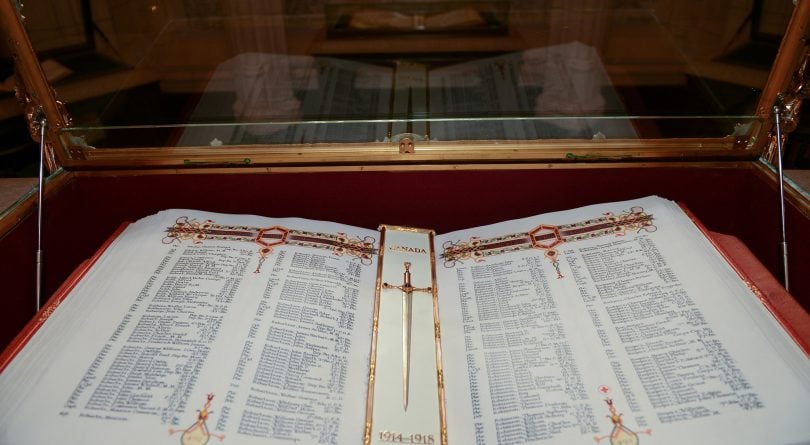 It’s impossible to say exactly how many Canadians died serving in the First World War.

The project of identifying, honouring and properly burying the dead continues to this day. The Commonwealth War Graves Commission, which is responsible for commemorating the 1.7 million men and women of the Commonwealth forces who died in the First and Second World Wars, says it receives new information daily. This August, four Canadian First World War casualties were buried in France, their bodies only recently discovered and identified. Their story illustrates why the official record remains fluid.

There’s no consensus on who counts as First World War dead or how many there are. The Commonwealth War Graves Commission pegs the number at 65,000. The Canadian War Museum’s website says it’s 61,000, a number that doesn’t include Canadians who died of their injuries after the war ended.

READ MORE: In their honour: Why we published more than 66,000 covers

For this project, Maclean’s used the database powering the Canadian Virtual War Memorial, run by Veterans Affairs Canada, as the source of the names we put on our special commemorative covers. There are 66,349 names in the database, a figure the department arrived at based on consultation with historians at the Department of National Defence. By using the Canadian Virtual War Memorial as a source, we included Canadians who served with British forces.*

The names of the servicemen and women included in the Canadian Virtual War Memorial are a digitized version of those found in the Books of Remembrance, which lie in the Memorial Chamber in the Peace Tower on Parliament Hill. Originally, former prime minister Sir Robert Borden intended to engrave the names on the walls of the Memorial Chamber, but there was not enough space for them all. 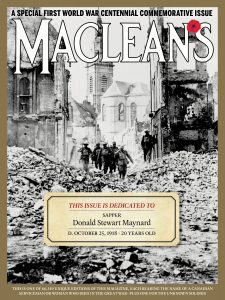 If you spot a magazine cover with a date of death after 1918, that serviceman or woman died of his or her injuries after the end of the war. The list includes people who died of their injuries as late as 1922.

The Canadian Virtual War Memorial database is the best, most comprehensive set of digital records of Canadian First World War dead. But because of the constantly evolving nature of the records, it is inevitably incomplete. Other projects, like R.H. Thomson’s The World Remembers, place the number even higher based on their own review of official records. We hope readers will take the opportunity to reflect not only on the servicemen and women we were able to honour with a cover, but on those whose names remain lost to history as well.

* Clarification: An earlier version of this article misstated the scope of the Canadian Virtual War Memorial.