You can't #stayhome if you have no home

Paul Wells: Shelters across the country are facing 'a perfect storm of bad news' with a vulnerable population and workers without protection 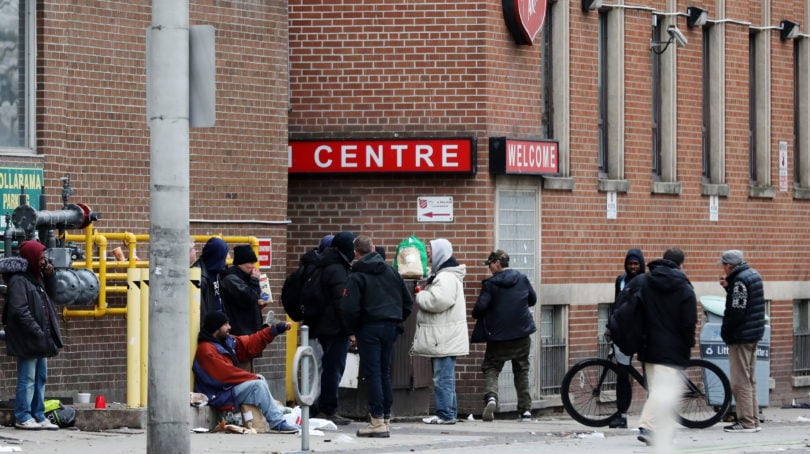 Men gather outside of a shelter in downtown Toronto on Saturday, March 28, 2020 (CP/Colin Perkel)

In quiet neighbourhoods all over Canada, families are sheltering at home alone, refusing to give the Coronavirus a chance to spread. But tens of thousands don’t have that option.

“I’m in Calgary,” Tim Richter said the other day over the phone. “Calgary has the largest emergency centre in North America. That’s the Calgary Drop-in Centre. They had 850 people there for dinner the other day. And in Alberta they’ve banned gatherings of more than 15 people.”

To Richter, the founder and CEO of the Canadian Alliance to End Homelessness, the vulnerability of Canadians experiencing homelessness is a familiar story. To governments, which have begun to realize the potential for a COVID-19 flareup in vulnerable populations, these people are a key part of a massive crisis.

It’ll come as no surprise that even before this viral pandemic, people experiencing temporary or long-term homelessness were already “extremely vulnerable,” Richter said. “Many will have pre-existing respiratory issues from a range of different reasons. The life expectancy for people who are homeless in Canada is about 50 years. So you lose 20-30 years off your life expectancy just by being homeless.”

All of that was already true before March. It’s compounded since. “Facilities for the homeless make it basically impossible to follow the public-health measures required for COVID-19,” Richter said. “Self-isolation, social distancing, sanitation, access to hygiene and health care—all of those things are really challenging.”

There have already been sporadic reports of people in shelters contracting the Coronavirus, and one case in Toronto of a shelter employee becoming infected. “Richter is certain there will be more. “It’s a matter of time, really. It’s not a matter of whether or not it’s going to happen, it’s when, and how bad.”

And the news of a worker at a shelter becoming infected aggravates the problems of the whole system. Shelters have been scrambling to procure personal protective equipment (PPE) that would allow them to stay safe while working. In the absence of PPE, many are opting to stay home, Richter said.

“So what we’re seeing now in shelters across the country is kind of a perfect storm of bad news. We’ve got this vulnerable population. We’ve got staffing issues, where staff are trying to take care of their own families or are afraid to go to work. And you have a lack of PPE in the shelters as well. Because they’re not prioritized, they’re not getting access to the protective equipment that is required to deal with this population.”

The federal government has announced $200 million to support women’s shelters and shelters for the homeless. Provincial governments, too, are treating the sector with greater urgency. On Tuesday Rajan Sawhney, Alberta’s minister of Community and Social Services, tweeted a photo of a new emergency shelter at the Calgary Convention Centre. The shelter’s been built with obvious care: hundreds of beds are spaced at a noticeable distance apart, with neighbouring beds situated head-to-toe instead of head-to-head.

That’s a pretty good implementation of a third-best solution, Richter said. Despite the attention that’s gone into it, the Calgary Convention Centre shelter represents accommodation most people with a choice would still gladly avoid. “The best solution, the safest thing for some of these people is to be in their own home. That’s not happening right this moment,” Richter said. “The second-best thing would be hotels where you can close the door, you can have a bathroom where you can wash, you have a bit more isolation ability. The next best thing” is the one the minister tweeted, but “again that’s still not ideal.”

“So we’re still making do. We’re kind of in the M*A*S*H era of this crisis response. It’s certainly not ideal but it’ll do in a pinch.”

Toronto has acquired some hotels to house homeless people and intends to rapidly add more. Calgary considered such a move but the Alberta government has been reluctant because retrofitting hotels takes longer than building impromptu facilities like the one at the Convention Centre, Sawhney told the CBC.

Richter’s association is in close contact with Adam Vaughan, the federal government’s Parliamentary Secretary for Housing, and with Ahmed Hussen, the minister of social development. Richter also exchanges text messages with Patty Hajdu, the health minister, who ran a homeless shelter in Thunder Bay before running for office. “She gets it,” he said.

But after the crisis is over, Richter said, the scale of Canada’s housing shortage will still need to be addressed. “The fact of this crisis tells us that in Canada, housing is health care. I think we’re due for an important, urgent national conversation about the role of housing.”

Modern mass homelessness in Canada “was effectively created by public policy,” he said, by round after round of cuts in federal spending on housing that started in the 1990s.  “We have flung people onto the streets of this country over the last few decades and have now left them in a spot where they’re extraordinarily vulnerable. And we’re scrambling to find shelter for them.”