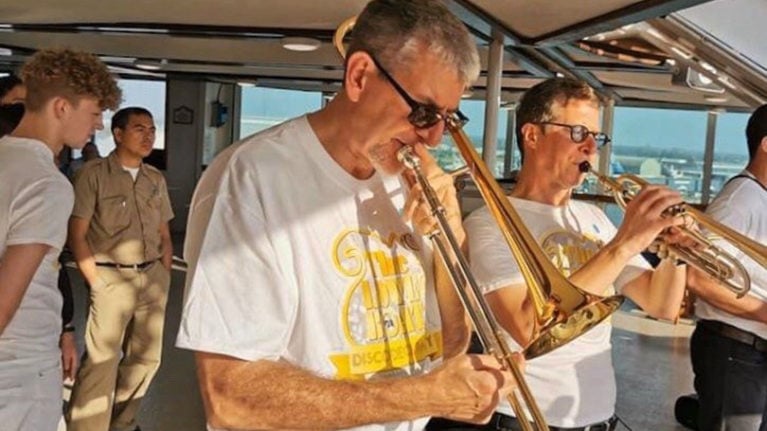 Rick Pauzé, a trombonist on the Sea Princess, spent months playing for crowds as the massive vessel bounced around Australia, New Zealand and Papua New Guinea. But when the coronavirus pandemic hit, and the 2,000-capacity ship offloaded the last of its passengers in Sydney, the crew wasn’t allowed off. As the Sea Princess drifted between ports for several weeks in search of a shutdown plan, Pauzé whiled away the time by playing concerts for nobody and, at one point, taking a lesson in how to fend off pirate attacks.

When the ship eventually anchored off the giant southeast Asian port of Manila, he played hall monitor, wandering empty corridors as his Filipino crewmates endured quarantine before they were allowed off. Long after Ottawa announced that the last Canadian cruise passengers were on the way home, Pauzé remained in his luxurious floating prison, unsure how long he’d be stuck at sea.

Pauzé, 57, is one of scores of Canadian cruise-ship workers left behind as the federal government scrambled to repatriate paying customers whose dream voyages had been ruined by COVID-19 outbreaks. Even on ships where no outbreak happened, the mere threat of the virus could leave passengers in agonized limbo, as some countries refused to let the boats dock and people to disembark. As of April 27, Global Affairs Canada was tracking 267 Canadians who remained on 84 such vessels.

When he boarded the ship on March 14, Pauzé had already spent more than four months at sea. That day, as the ship departed Hobart, the capital of remote Tasmania, the retired schoolteacher had no idea he’d be caught in a logistical nightmare that his employer, Princess Cruises, was struggling to navigate.

On March 11, the World Health Organization declared the coronavirus a global pandemic. The next day, Princess Cruises shut down its operations with four ships still at sea off Australia’s coast alone. Crew of the Sea Princess were forbidden from mingling among passengers, who were allowed to disembark in Sydney on March 17. The ship spent several days navigating the Aussie coast, sailing back and forth, awaiting direction. On April 2, Brisbane finally offered a dock to resupply and refuel. “When we did dock it was an industrial area that seemed rather remote and abandoned,” says Pauzé. “It was at the mouth of the river not near the cruise terminal.”

Canada’s embassy in Australia was in contact with Pauzé, one of eight Canadian crew on the Sea Princess—musicians and spa staff from Vancouver, Toronto and Quebec. At the time, thousands of Global Affairs Canada bureaucrats were focused on repatriating Canadian passengers stuck on ships scattered all over the world’s oceans. Sylvain Leclerc, a Global Affairs spokesman, said official provided “ongoing consular assistance” to Canadian crew and worked with the cruise lines on getting them home.

But getting off the ship required a port willing to accept Pauzé and his coworkers, even if they headed straight to an airport to fly to Canada. Brisbane wasn’t it. A few days later, rumours circulated the ship was headed to the Philippines. Pauzé credits his captain, Tony Ruggero, with providing frequent updates—even if there wasn’t much to say.

Rick’s wife, Dorothy, has struggled to maintain contact with her husband. WiFi, which members of the crew purchase with their own money, was spotty. Video chats were choppy. “I’ve had a countdown on my phone since he left, and it was all fun,” she says. “It’s not a happy countdown anymore because I really don’t believe he’ll be home by then.”

The Sea Princess’s official itinerary for 2020 included trips to Fiji, American Samoa, Hawaii and French Polynesia—a months-long odyssey that, for Pauzé, would have ended on May 12 in Sydney. But the pandemic, of course, had other plans.

Eventually, the Sea Princess headed north, and the plan was for Filipino crew to quarantine for 14 days while the ship sat in Manila Bay. Along the way, the crew was trained on how to deal with pirate attacks—there had been reports of increased piracy in the region—with water cannons and loud speakers.

When the ship arrived near Manila on April 20, several large passenger ships anchored in a cluster, waiting for the opportunity to dock. Pauzé knew some of the crew on nearby vessels, and they shared bits of information when they could by text.

When Ruggero tweeted a photo on April 22 of the ship receiving fresh produce, the crew had been aboard for 40 days straight. The same day, the last six Canadian passengers on cruise ships—all of them aboard the Costa Deliziosa—disembarked in Italy and headed home.

Princess Cruises didn’t directly answer questions about the fate of the Sea Princess crew, pointing to a statement saying the company had repatriated thousands of crew members and remained committed to returning “all our teammates safely home to their loved ones.”

Humbled by the pandemic, Pauzé has modest plans for when he pulls into his driveway back in Barrie. “Feel the breeze and sunshine and the ground not moving,” he says. “Just the feeling of being home will be wonderful.”