The decision to expose the Lake St. Martin First Nation to floodwaters in 2011 forced 1,400 from their homes, leaving behind a ghost town. A tiny, determined few chose to stay. 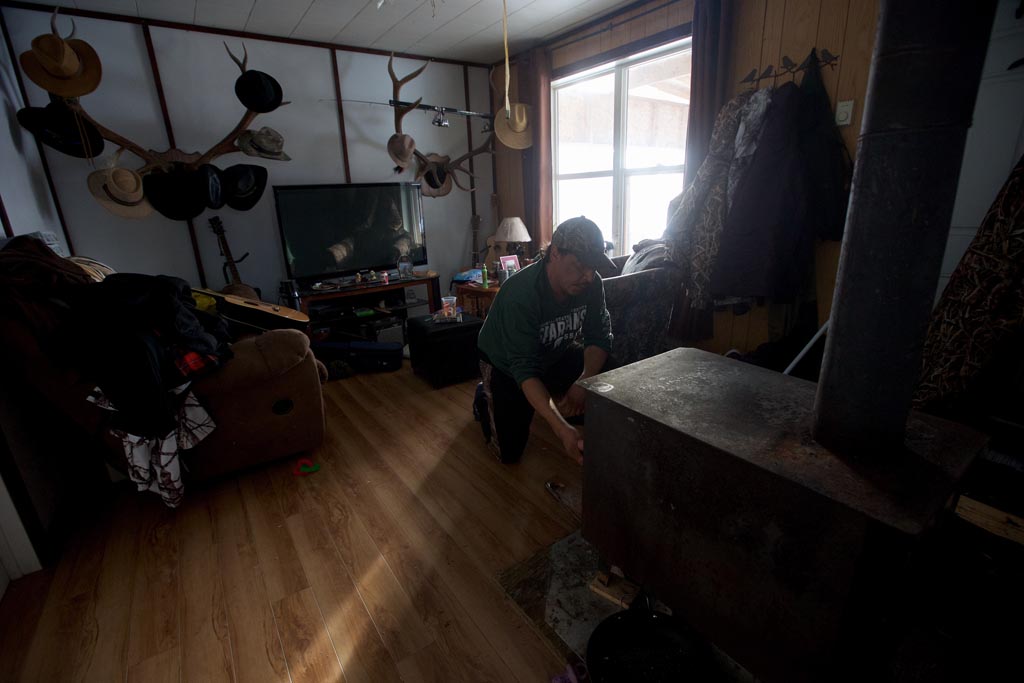 The surface of Lake St. Martin is frozen beneath Clint Beardy’s feet. It’s a clear December morning in Manitoba’s Interlake region, where Beardy and his fishing partner are pulling a 100-metre net from a hole augered into the ice, one of many dotting the lake. The sun sits low, illuminating the green ice like stained glass. Dozens of entangled whitefish splash out of the water before being piled into buckets. “It’s rarely this frozen by this time of year,” Beardy says. The lake is serene and quiet, and the original Lake St. Martin First Nation sits not far off on its northern edge. There too, in Beardy’s community, silence prevails. These days, he’s one of the few people who still lives there.

On the morning of May 8, 2011, the people of Lake St. Martin First Nation were evacuated. Patches of snow could still be found on lawns and the grass was damp and brown. Gravel dikes shielded roads and houses, but an incoming surge of water had, in some spots, already punctured these bulwarks. From above, the fields surrounding the community looked like a swamp poised to swallow the remaining dry land. A massive flood was looming, and for most of the people living in Lake St. Martin, this was the last time they would see their homes.

Band councillors began going door-to-door, urging the roughly 1,400 residents in the southern Manitoba community to leave. Meanwhile, charter and school buses lined up to take evacuees nearly 300 kilometres south to Winnipeg, where they’d stay in hotels. Most packed lightly or not at all, thinking they’d be back in a week or less. While some were excited about the idea of a short vacation, others worried about the fate of their friends, family and home. And amid all the uncertainty, a handful chose to defy the advice of their leaders and provincial authorities, and to stay.

Beardy and his father, who wished to not be named or quoted, were among them. They live in separate houses about 75 yards apart. When councillors had knocked on his father’s door to tell him he had to go, Beardy remembers, his father, 73 at the time, began to cry. “He said: ‘I want to stay home,’” Beardy recalls. “I said: ‘Okay, I’ll do everything I possibly can to make that happen’” (Beardy likes his privacy; he reluctantly agreed to an interview with Maclean’s, and says he won’t be doing more).

The 2011 flood was the largest spring runoff in Manitoba’s history, both in water level and duration. The province was faced with a choice: risk flooding the property of wealthy cottagers, farming areas and Winnipeg, or divert the rising deluge from Lake Winnipeg downstream at the expense of Indigenous communities. The Manitoba government opted for the latter and, as a result, more than 2,000 people were evacuated from eight First Nations communities. Lake St. Martin was one of two completely displaced, and more than six years later, the province has never apologized for the impact of its decision.

Hotel rooms, some of them occupied for years, became cluttered with suitcases and kitchen appliances. Among the displaced from Lake St. Martin, nearly 100 have died since 2011—from suicide, illness and even homicide. Some youth have been lost to street gangs or mental illness. Compensation for lost homes and livelihoods was never provided to this Anishinaabe community. In June, residents of four flooded-out First Nations, including Lake St. Martin, earned a victory in the name of a $90-million settlement from the provincial and federal governments. 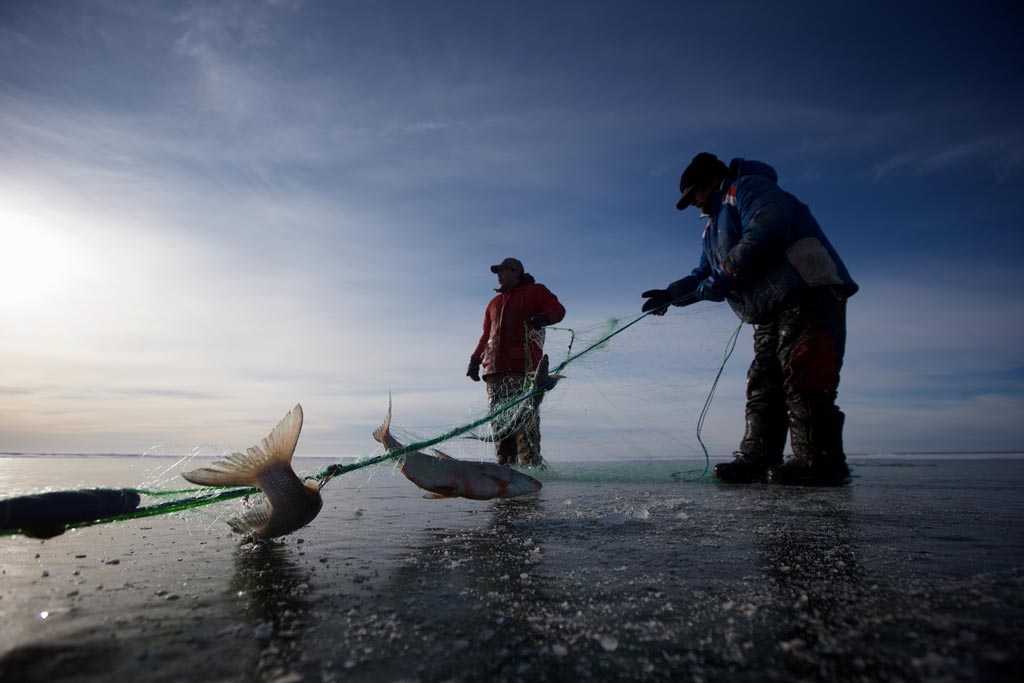 The community had repeatedly flooded since the 1960s, but not like it did in 2011. Afterward, the ground was so saturated that, when community members died, their graves would fill with water as quickly as shovels dug out the soil. “They had to bury their dead ones in water graves,” says Myrle Ballard, who is from Lake St. Martin.

Ballard, a PhD graduate from the University of Manitoba’s Natural Resources Institute, has studied the 2011 flooding. By mid-December, 190 new houses were expected to be occupied in the new Lake St. Martin—a site adjacent to the old one, ending more than six years of displacement (130 more are to become available in 2018). But the province purchased the new digs without consulting the community.

Ballard takes issue with the new location, especially given that two farmers offered in 2012 to sell land to the community that sat more than 30 vertical metres higher than the old reserve. Instead, says Ballard, the province rejected the offer in favour of ground that had to be drained before construction could begin, making the soil unfit for farming. “You don’t have to be an engineer to know that if you drain something that means it’s under water,” Ballard says. In seven years, she predicts, “it’s going to be back to the way it was before.”

The province rejects this claim, citing that the new Lake St. Martin—sitting three kilometres from the lake itself and 25 to 30 feet higher—is better drained than the old one and less susceptible to flooding. In a statement to Maclean’s, a Manitoba government spokesperson said the new community “was designed with an engineered drainage plan and adequate grading for each yard and home, reducing the chance of flooding caused by large weather events and meltwater.”

Beardy, though, has no desire to leave and doesn’t believe he has to, as the old community will remain a part of Lake St. Martin’s territory. He’s a commercial fisherman and, in autumn, guides American hunters through the area; he buys groceries and other essentials in nearby Ashern. His small, two-bedroom bungalow sits on a low ridge and was never touched by water or mold. It’s built on a foundation four feet off the ground. These days, Beardy’s homestead looks like a small village, complete with sheds and spare cabins for his seasonal guests.

But living in an abandoned community has its challenges. The two roads out of the community are no longer maintained; heavy snow or rain can make them impassable. To switch on the lights, take a warm shower or use his oven, he has to walk outside and turn on a generator. A black utility wire running from his father’s house helps him power the refrigerator, coffee maker and Wi-Fi. “As long as we got those three things going, we’re fine,” he says. 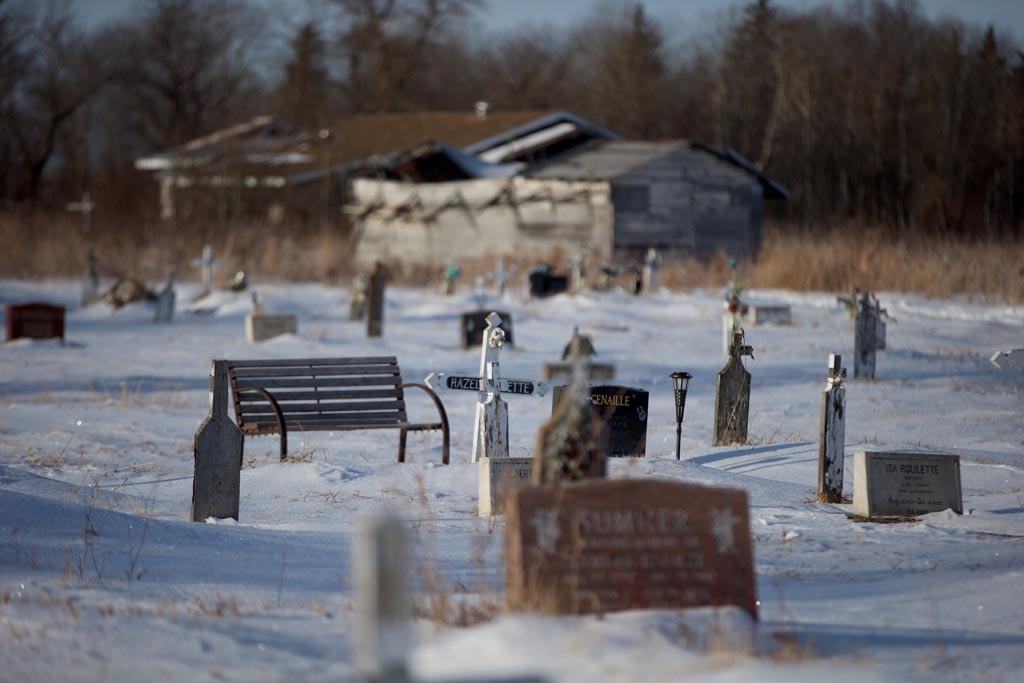 The cemetery and an abandoned home at Lake St Martin First Nation are reminders of the community that once existed there. Residents are being moved to new homes about four kilometres away (Photo: John Woods)

This is Beardy’s third winter without hydro. He says Manitoba Hydro cut him off after Lake St. Martin stopped covering the bill for some of its residents on social assistance. It happened in January of 2014, he says, on a night that dropped to -47 C with the wind chill—before he could install a wood stove through his ceiling. Beardy pleaded with the utility for months to turn it back on, but says he was slapped with a bill more than $5,000 that he couldn’t afford to pay. “They weren’t trying to help,” he says, noting that he never received a warning. “I tried so many different things”—which included an effort to obtain the required permits and inspections.

(Manitoba Hydro would not directly comment on Beardy’s situation, citing company policy and provincial privacy legislation. In an email to Maclean’s, Manitoba Hydro said it wrote off many Lake St. Martin accounts—worth roughly $100,000—following the flood.)

Beardy’s friends call the area “the Swamp,” referencing the tall, marshy weeds that now surround the boarded-up houses in what used to be the community. A drive through reveals remnants of homes that were either burned down or sold to buyers who jacked them up and trucked them away.

None of that matters to Beardy. For him, Lake St. Martin is idyllic. It’s a place where wildlife is abundant; where he can spot deer in his front yard. It’s where he learned how to fish as a young boy. His memories, he insists, can never be replaced. “I do it because this is home, it always has been,” he says. “This is where I grew up. This is where I know every little nook and cranny in the bush. I hunted these woods, I still do. My roots are so deep here.”