A 16-year-old phenom, a gifted captain and a beloved coach are among the dead in Humboldt bus crash

The hockey community—and the country as a whole—are reeling as identities of the victims emerge on social media, and by word of mouth 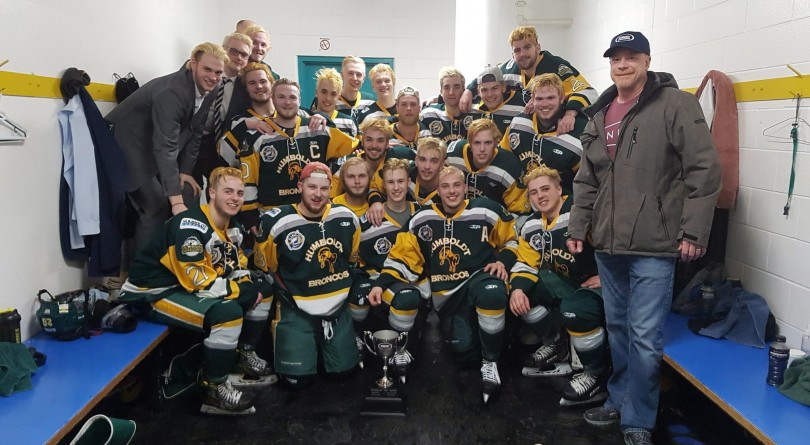 Members of the Humboldt Broncos junior hockey team are shown in a photo posted to the team Twitter feed, @HumboldtBroncos on March 24, 2018 THE CANADIAN PRESS / Twitter-@HumboldtBroncos

The hockey world is reeling after 15 people were reported dead following a collision Friday near Saskatoon involving a junior hockey team. The Humboldt Broncos, a club that included players from Saskatchewan, Alberta and Manitoba, were on their way to a must-win playoff game when the team bus collided with a semi-trailer.

The accident sent a wave of grief across the country as Canadians paid tribute to young players who had NHL and college hockey dreams, in a province where the game is ingrained in the fabric of rural communities.

The devastating crash occurred at around 5 p.m. local time on Highway 35 near Tisdale, in northeastern Saskatchewan. RCMP said that 29 people had been on board, and 15 were sent to hospital—three of the injured in critical condition. Late Saturday, it was reported that one of the injured had died.

READ MORE: Humboldt Broncos family: ‘To wake up and find out he didn’t make it is devastating’

Police have yet to release the identities of the victims, but friends and family of those involved quickly began sharing their grief and condolences on social media.

Logan Boulet died late Saturday after being placed on support. In a statement, Boulet’s family said that their son became an organ donor as soon as he turned 21, and his organs were expected to be harvested overnight Saturday. The Lethbridge, Alta. native played three seasons with the Broncos.

21 yr old Logan Boulet tragically passed away in the Humboldt Broncos collision. His family donated his organs & through his tragic death others survive. Logan Boulet and family are Canadian heroes. Families have futures because of him. Remember this smile #Hero #PrayForHumboldt pic.twitter.com/PbixTa7JD8

Tyler Bieber was the radio voice of the team, reported to have died in the crash. He was in his first year working for Bolt FM as a play-by-play broadcaster for the Humboldt Broncos.

Mark Cross, the young assistant coach for the Broncos, also died in the crash. Cross played for the Estevan Bruins, a junior A team in Saskatchewan. After his junior career ended, he moved to Toronto, where he played five years of university hockey with the York Lions.

Mark Cross, 27, Strasbourg, SK. Played for the Estevan Bruins before going to the OUA and leading the York Lions. Came back to his home province to coach. pic.twitter.com/Gp4LmPGxRz

Glen Doerksen was the bus driver for the Broncos. He died in the crash, according to family and friends. Doerksen was a fixture in the hockey community in Humboldt, where he drove several teams—ranging from minor to senior—to and from games.

Glen Doerksen, who was driving the bus. Other teams say even in horrible driving conditions, they felt safe when Glen was driving and telling his stories of past hockey trips. pic.twitter.com/Zwq7il4Wu6

Brody Hinz was the Broncos’ volunteer statistician and was also reported dead in the crash. He is remembered as a young man who loved the Broncos.

Nobody loved the #HumboldtBroncos more than Brody Hinz. He volunteered to do anything that could be helpful. He was the team statistitician-helped the boys put up some great numbers. Thank you forever Brody. #PrayersForHumboldt pic.twitter.com/R5ul8VXTQX

Logan Hunter was one of four Broncos to have played for the triple-A midget St. Albert Raiders in Alberta. Relatives reported he had died in the crash. He was in his rookie season with the club.

According to a relative, Humboldt Bronco Logan Hunter has passed away as a result of last night's accident. His sister posted this statement a few minutes ago. #PrayersForHumboldt pic.twitter.com/1r7xuPhEeA

Jaxon Joseph, the son of former NHL player Chris Joseph, was confirmed dead in the crash. He started his junior career in the British Columbia Hockey League before coming to Saskatchewan, spending two seasons with the Melfort Mustangs. He joined the Broncos at the beginning of the 2017-18 campaign and was the Broncos’ leading playoff scorer. Joseph was another product of the St. Albert Raiders.

We are extremely saddened to hear that former Eagle Jaxon Joseph has passed away in the Humboldt Broncos bus accident. Jaxon was a member of our team in the 2015-16 season. Rest In Peace. pic.twitter.com/POtRTQFrrx

Goaltender Parker Tobin had played for the Spruce Grove Saints of the Alberta Junior Hockey League before making the jump to the SJHL, where he’d backstopped the Broncos through 22 regular-season and five playoff games. In the post-season, he boasted a sparkling 1.92 goals-against average.

R.I.P.
Jacob Leicht
Blessed with a chance to get to know you. We will never forget you.
Love
P.A. St. Mary H.S. Physics 30 Class of 2017 pic.twitter.com/K6q4PGTGwl

Conner Lukan was also confirmed dead in the crash. He was from Slave Lake, Alta. and another Bronco to have played for the midget triple-A St. Albert Raiders in Alberta. He spent the first three years of his junior hockey career with the Spruce Grove Saints in the Alberta Junior Hockey League, before joining the Humboldt Broncos. He was one of seven Albertan players on the team.

Also sending strong thoughts to Conner Lukan, who I had the opportunity to take pictures of back in the 2015-16 #AJHL season. pic.twitter.com/2zeaAOtIZG

Evan Thomas, an 18-year-old winger from Saskatoon, was reported dead in the crash. He was in his first season with the Broncos, having recorded five goals and nine assists. He was a major junior prospect for the Kootenay Ice.

Working in hockey for so many years I feel absolutely gutted today. Remembering every time I said “have a safe trip” to co-workers, players, my billets. Prayers for all, especially the families of former @WHLKootenayICE prospects Logan Schatz and Evan Thomas #PrayersForHumboldt

Stephen Wack, a defenceman from St. Albert, Alta. also played triple-A midget hockey for his hometown Raiders. He played his first two junior seasons with the Camrose Kodiaks and Whitecourt Wolverines in Alberta prior to joining the Broncos in 2016. “Stephen I love you,” his younger brother Justin Tweeted Friday.

Stephen I love you.

Among the dead was 16-year-old Adam Herold, the youngest player on the Broncos’ roster. Herold spent the entire regular season in the triple-A midget ranks with the Regina Pat Canadians, before being called up to play a handful of games with the major junior Prince Albert Raiders—an opportunity typically reserved for exceptional 16-year-olds.

Herold was drafted by the Raiders 35th overall in the 2016 Western Hockey League bantam draft. When Prince Albert was knocked off in the first round of the WHL playoffs, Herold got the call to join the Broncos, who play one level below the Raiders, for their playoff run. He played a total of eight games for Humboldt before his death.

I didn’t want to jump the gun, or maybe it didn’t want it to be true, but R.I.P. to Adam Herold. He was 16 years old and from Montmartre. He was going to turn 17 on Thursday. pic.twitter.com/jDx5ySeQBd

Teammates of Adam Herold, who captained the @aaapatcanadians tweeting he died today. He was 16 and brought up to play with the Broncos in the playoffs. Rest In Peace, young man. pic.twitter.com/ZSEVCs0neI

Herold was the former captain of the 2013-14 double-A Weyburn Youngfellows. He is remembered as a natural leader; he wore the C for the Pat Canadians, and the team is planning grief counselling for the teammates he leaves behind. “[He was] an unbelievably fine man,” says John Smith, the team’s manager. “He would have been a great guy.”

Logan Schatz, the 20-year-old captain for the Broncos, also died in the crash. He was the second-best scorer in the league and averaged 1.49 points per game. He had played for the Broncos for over four years and served as the captain for the past two-and-a-half years. “Tonight we lost a billet son,” Michele Unger wrote on Twitter, who served as Schatz’s billet family while he lived and played hockey in Humboldt. “We were so blessed to have had Logan Schatz in our family for 3 years. Thank you Bonnie and Kelly for sharing your son.”

Tonight we lost a billet son. We were so blessed to have had Logan Schatz in our family for 3 years. Thank you Bonnie and Kelly for sharing your son. Our community has lost so much. #HumboltBroncos #prayforhumboldt

The Broncos head coach Darcy Haugan was also reported to be among the dead, his wife Christina George-Haugan confirmed. Haugan coached the club since 2015; he was 41 and leaves behind a wife and two sons. Before taking over the Broncos’ bench, Haugan coached the North Peace Navigators, a junior B team in Alberta’s North West Junior Hockey League. His assistant coach, Mark Cross, is also reported to have died.

Haugan’s sister Deborah Carpenter Tweeted about the loss of her younger brother early Saturday morning. “The tears just keep coming,” she Tweeted. “The reality that he’s gone is just too much.”

As of Sunday afternoon a GoFundMe page had raised nearly $4 million for the families of the people affected.

Correction: Monday April 9: On Monday morning the Saskatchewan Ministry of Justice said one of the deceased in Friday’s fatal crash was misidentified. The ministry said the body of Parker Tobin was mistaken for that of Xavier Labelle. Labelle is injured but alive, and Tobin is among the 15 people who died.