Kyle Edwards: A video surfaced of Dennis Robertson, Kawhi's uncle and business strategist, appearing to get in on the chant. Could that signal hope for Toronto fans? 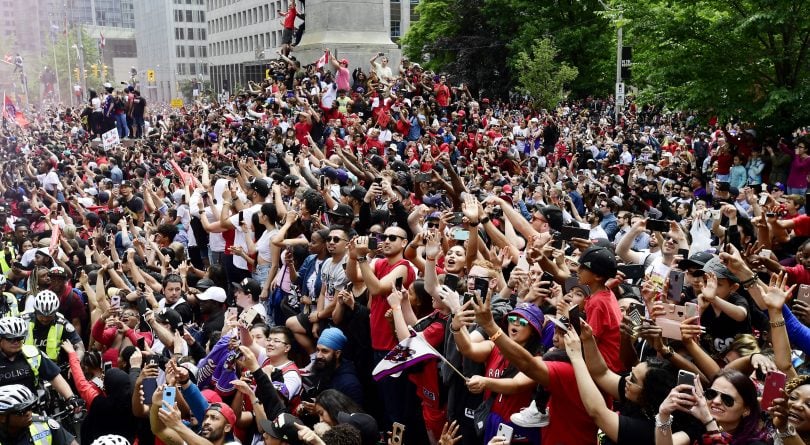 The Toronto Raptors and their fans celebrated like champions. And at times Monday’s unforgettable parade—which lasted much longer than expected, and drew crowds of about two million people, including the Prime Minister himself—also amplified a season-long message to Kawhi Leonard: “Stay.”

Leonard, who becomes a free agent at the end of June, was greeted by crowds chanting “MVP!” He accepted a plant from a fan while slowly parading down the street, and a palm tree was later gently placed on the stage at Nathan Phillips Square—a nod to “Plant Guy” and his “Kawhactus,” which went viral on the night of the team’s Game 6 victory over the Golden State Warriors. There were number two jerseys scattered throughout a sea of red and white.

For much of the celebration, #5moreyears trended on Twitter after a video emerged of Raptors guard Kyle Lowry chanting the slogan with one arm around Leonard. It appears to show Leonard getting a kick out of the gesture, and his uncle and career and business strategist Dennis Robertson—who will ultimately play an important role in deciding where his nephew ends up next season—also getting in on the chant.

Do Uncle Dennis and Kyle Lowry know something we don't??👀👀
#5moreyears

Some say Leonard owes Toronto nothing after helping the franchise win its first-ever NBA championship, and should he decide to leave the team, the breakup will be amicable.

But Canadians have embraced Leonard in a way they have reserved for few, if any, American athletes. He’s quiet and humble, and extraordinarily gifted—some would say a perfect match for this market. He’s already a Canadian sports hero and icon. In the last year, the two-time finals MVP has been offered free food and lodging for life, and during the parade pundits speculated whether Leonard would make his decision with the microphone in his hands. He offered no breadcrumbs.

Still, the courting continued apace. Toronto Mayor John Tory, in giving Leonard and the Raptors the key to the city, referred to the superstar as the “King of the North.” “Kawhi, and maybe I should refer to you as ‘Your Majesty,’ you already have the keys to our hearts,” Tory said before shaking hands. “You should know that every door in this city is open to you and your teammates. If you find one that doesn’t, you call us and we’ll look after it.”

Toronto Mayor @JohnTory presents Kawhi Leonard and the @Raptors with a key to the city. 🔑👏 pic.twitter.com/JU4gKEJ7zO

There’s no telling what Leonard’s next move will be this summer. Raptors fans hope they sold him on the only thing that matters—winning a championship. Leonard did, however, make one thing clear: he arrived in Toronto with his now-iconic, meme-friendly laugh, and, much like this year’s playoff run, he got the last one, too.

WATCH: Kawhi Leonard makes fun of his own iconic laugh – and brings down the house at the #RaptorsParade. #WeTheNorth