A 'safe zone' in Syria was a lie

Adnan R. Khan: Turkey vowed to rid northern Syria of terrorists and create a 'safe zone' for refugees. Instead, terrorists have taken over. 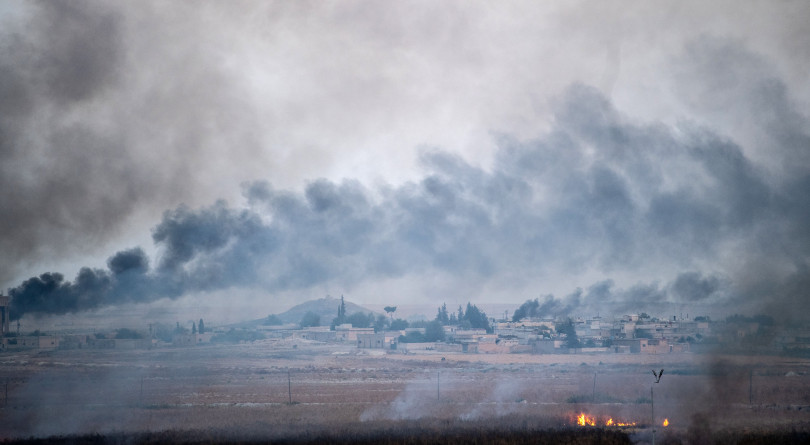 Smoke rises from the Syrian town of Tal Abyad, on Oct. 10, 2019, on the second day of Turkey's military operation against Kurdish forces (BULENT KILIC/AFP via Getty Images)

Almost two months after Turkish forces rumbled into Syria’s north, the inevitable is now playing out: chaos. It’s easy to forget in our rapid-fire news environment that two months is not a long time. The consequences of Turkey’s actions are merely in their early stages, and by the looks of it, the future promises more disorder, more conflict and more tragedy.

This point deserves emphasis: Turkey’s justification for invading Syria was premised on false assertions. It was not, as President Recep Tayyip Erdogan repeatedly claimed, to rid the Turkish border of the Kurdish People’s Protection Units, or YPG, whom he considers terrorists. It was to bolster his domestic political standing at a time when his support is waning and rebellions among his own allies are mounting. The terrorism allegation was merely a cover.

Whether or not the YPG are in fact terrorists is an open question. They are, no doubt, a branch of the Kurdistan Workers’ Party, known by its Kurdish acronym, PKK, a U.S.- and EU-designated terrorist organization. From my own interactions with them, it’s clear that the YPG is led by PKK-trained commanders.

But if terrorism is an act, then it’s not the YPG that’s guilty of it but the Arab militias backed by Turkey. Here’s what Human Rights Watch reported last week:

READ MORE: The terrifying last days of ISIS in Mosul

“Factions of the Syrian National Army (SNA), a Syrian non-state armed group backed by Turkey in northeast Syria, have summarily executed civilians and failed to account for aid workers who disappeared while working in the ‘safe zone’. The armed group has also apparently refused to allow the return of Kurdish families displaced by Turkish military operations and looted and unlawfully appropriated or occupied their property.”

Even before Turkish forces arrived, local farmers could sense the coming storm. “If Turkey comes here,” Abu Hamza, a wheat farmer, told me in late September, less than two weeks before the Turkish military launched its Peace Spring operation, “you will see what will happen. The Arabs fighting with the Turks will force the Kurds to leave, the Turks will replace them with Arab refugees living in Turkey, and there will be more war.”

Turkey has painted a very different picture. Pro-government media outlets here write in breezy terms about the success of the operation and how Syrian refugees—3.65 million of them in Turkey alone—should be able to re-settle there soon.

But the fiction is getting progressively harder to maintain as the steady stream of abuses carried out by Turkish-backed militias trickle out. Still, Turkey insists that it has set up a safe zone, and now the world seems to be jumping on that idea. In October, the European Parliament rejected a Turkish-administered zone but in its place, called for one monitored by the UN.

What no one is talking about is the feasibility of a safe zone to house millions of refugees in a part of Syria that lacks the resources to care for them. What would it look like? Would it be in the form of camps? If so, where would they be built? On farmland that provides sustenance for local villagers? For how long would that land be appropriated? Months? Years? Decades?

Currently, the largest refugee camp in the world is the Kutupalong camp in Bangladesh housing more than 600,000 Rohingya refugees from neighbouring Myanmar. It is packed so tightly with men, women and children that they have very little access to even the basics of life, like toilets. They scrounge for food and battle over shelters.

Now imagine three million people, the number of refugees Erdogan has said he would like to resettle in his northern Syria safe zone. It would be a humanitarian disaster.

Still, the idea of a ‘safe zone’ in Syria has had a long shelf life. Back in 2017, Donald Trump, called for one during an ABC News interview. “I’ll absolutely do safe zones in Syria for the people,” he said, adding it has been a “disaster” after Europe allowed “millions of people” to enter its territories.

We could dismiss Trump’s musings as the ramblings of a closet racist obsessed with immigration, but his opponent in the 2016 presidential campaign, the putatively progressive Hilary Clinton, had more or less the same idea, repeatedly suggesting in campaign speeches that safe zones would be a good idea to “help protect the Syrians and prevent the constant outflow of refugees.”

At the time, both Trump and Clinton were short on details, perhaps deliberately so because safe zones are such a controversial undertaking. As Chris Kilford, President of the Canadian International Council and the former defence attaché to Turkey, pointed out to me in 2017:  “Safe zones simply end up creating safe operating areas behind a humanitarian veneer for all manner of rebel and jihadist groups who soon learn to use them as operational launching pads.”

Barack Obama, during his last year in office, resisted the idea of a safe zone for that exact reason, prudently reminding people that setting one up would require the U.S. to be “willing to militarily take over a chunk of that country.”

If the EU has its way, it would have to be UN peacekeepers who would occupy northern Syria. But according to international law, that would require a UN Security Council resolution, which is unlikely given Russia’s veto power.

But let’s imagine for a moment that a UN resolution is passed. Could a peacekeeping force be stood up to keep the safe zone safe? If it were, it would be one of the most dangerous UN missions in its history. The zone would not only house the millions of refugees currently living in Turkey but also hundreds of thousands more displaced from the last Syrian rebel stronghold in Idlib. Those rebels are dominated now by jihadist groups who, as Kilford points out, would use the zone as a base of operations. UN Blue Helmets would likely become a target, and they are not equipped for the kind of counter-terrorism mission that would entail.

Given the dangers, which countries would then agree to provide troops for that peacekeeping force? Canada? I doubt it.

Trump appears to have found a solution to that dilemma: Hand the safe zone over to the Turks. The only problem is, Turkey is not willing, nor particularly able, to pour in the kinds of resources that would prevent the zone from devolving into chaos. Instead, it has relied on ground forces made up of its own proxies—mainly Arab militiamen, many of whom are reported to be jihadist militants themselves.

And yet, Turkey continues to claim it invaded northern Syria to rid the area of terrorists and set up a safe zone for refugees. Instead, it has set in motion events that will create a safe haven for terrorists and a humanitarian crisis for refugees. Well done, Mr. Erdogan.