An Australian bushfire terrorizes every living thing in its path

Image of the Week: The impact on people and property has been devastating. Same goes for Australia's wildlife. 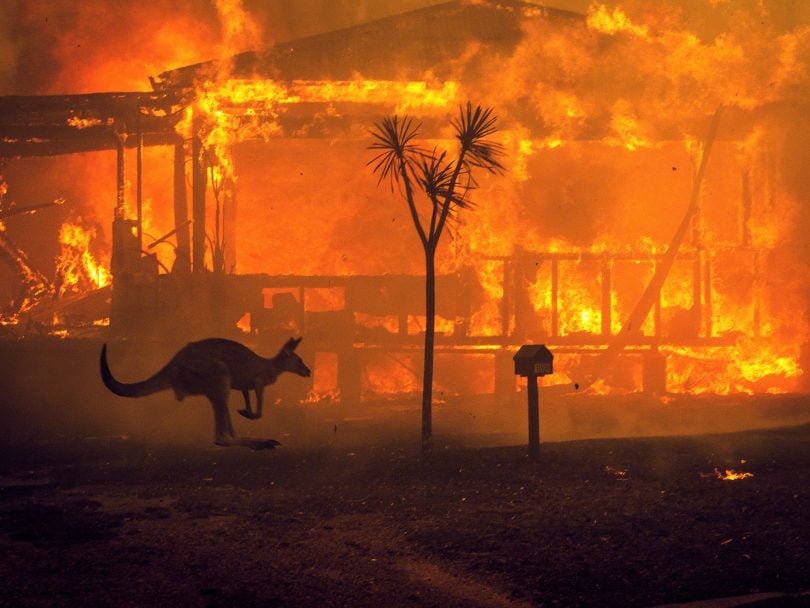 It’s difficult to comprehend the magnitude of the wildfires raging across Australia. Nineteen people have died; 900 homes have been destroyed. The flames are blazing across 5.9 million hectares of the island—in Southern Ontario, that would stretch roughly from Peterborough to Lake Huron, reaching as far south as London and Rochester, N.Y. (The 2016 forest fires of Fort McMurray, Alta. were roughly one-twelfth that size.) The toll on human life and infrastucture is enormous, and numerically speaking, the impact on wildlife has been worse. Nearly half a billion animals and plants have been killed in the inferno, which has left charred corpses of koalas and kangaroos littering the roads and streets. The fate of the one pictured above, seen fleeing the town of Lake Conjola, New South Wales, is not known. Ecologists believe about one-third of the the area’s native koalas—8,000 of the already-threatened species—are dead. “It’s just showing how unprepared we are,” Kellie Leigh, the executive director of a local conservation organization, told Australia’s parliament in December. “There are no procedures or protocols in place—even wildlife carers don’t have protocols for when they can go in after fire.” The record-breaking blaze has prompted local authorities to change their conventional warnings not to feed wild animals. Now, people are being advised to feed the wildlife. They need all the help they can get.