Portrait of a lady: The delicate art of capturing the Queen

Critics slam the 133rd official portrait of Elizabeth II, but Her Majesty is not an easy subject to capture 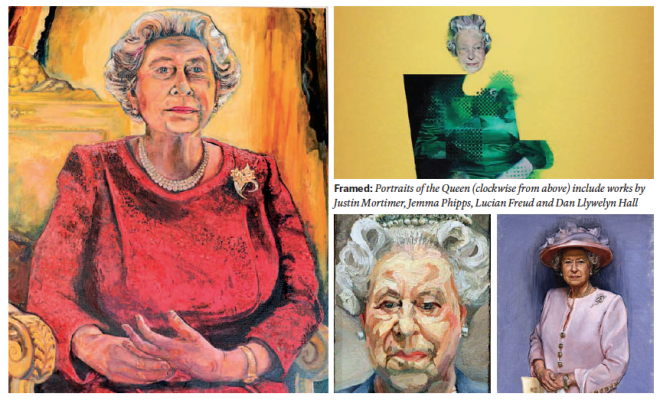 And speaking of viewpoints, the British critical press did not waste time voicing theirs; a towering wave of acid disapproval washed over the commission within hours of its presentation. Almost instantly, the press had cruelly dubbed it the “Spitting Image puppet” portrait, for its cartoonish, exaggerated look. The Telegraph’s Harry Wallop was particularly sharp, declaring the painting “makes Her Majesty looks as if she is Mammy Two Shoes from Tom & Jerry. Her fingers are as fat and spongy as Wall’s sausages and her expression is as vibrant as a stale pork pie.” Hall, for his part, sniffed that he “wouldn’t change a thing.”

As official unveilings go, it was no surprise. Since the Queen’s ascension to the throne 61 years ago, the portraits that have met with critical approval have been few and far between. Whether it was Lucian Freud’s famous 2001 close-up, produced over 18 two-hour sittings and hammered by the press (the Times famously described the face as having “six-o’clock shadow and the neck that would not disgrace a rugby prop forward”), Justin Mortimer’s 1998 controversial Warholian apparition, or John Napper’s 1953 “long neck” portrait, which received such a critical drubbing, it was locked away in the bowels of Liverpool town hall for nearly half a century afterward, the Queen—for all her openness and availability to painters—has proved a very difficult subject.

And yet, as any Commonwealth native knows just by sifting through her change purse, the Queen is the most pictured living person in history. Images of Her Majesty are everywhere—from the most erudite art galleries to the humble, now-worthless penny.

The National Portrait Gallery in London, for example, currently has 742 separate formal images of the Queen, and that’s just the tip of the iceberg; Canada’s own Charles Pachter made a name for himself painting Elizabeth II (most famously astride a moose) in an unofficial capacity.

This plethora of portraiture is in part symbolic (it reinforces the “head” in “head of state”) but it’s also a time-honoured tradition of royal life. Part of a monarch’s job is to make herself seen and felt throughout her domain; the simplest way to do so is visually. While the Queen has never given an interview or expressed a controversial public opinion, she has willingly disseminated her image countless times and continues to do so. The fact that these more formal images have often proved wildly divisive only serves to underline the Queen’s own detachment from controversy. The portraits make waves but she herself floats above it all, untouched and unchanged. The result is a monarch who communicates to her people using Plato’s concept of artistic “mimesis” (imitation or showing) rather than its corollary, “digesis” (telling). Her identity, as disseminated and reflected through hundreds of artists, is one of our culture’s great mimetic forms.

Over the years, the Queen has given hundreds of hours to the most respected portraitists of her time. And while the results have been mixed, most artists report that she is excellent company as a sitter. She is said to be full of good-humoured small talk, though slightly less talented at keeping still. The painter John Edwards famously told an anecdote of how, during one of his sittings with the Queen, his palette fell face down on the floor with a splat. The Queen looked down at the mess and remarked, “It always falls butter side down, doesn’t it?”

Despite putting her portraitists at ease, many painters have remarked on how difficult it is to properly capture the Queen. Her delicate features, while unmistakably familiar, don’t easily lend themselves to likeness or caricature. As June Mendoza, an artist who has painted the Queen five times, once observed, “She’s not difficult, but she is difficult to paint.”

Of the successful portraits, Pietro Annigoni’s 1955 painting of the Queen in her Order of the Garter robes is most often cited by critics as the best. In it, the young Elizabeth gazes off into the distance, a cool and aloof beauty, simultaneously at ease with herself and yet commanding in her role.

While so many modern painters of the Queen seem to have missed that mark, photographers have had much better luck. Last year, the Victoria and Albert Museum devoted an entire exhibit to Cecil Beaton’s extraordinary series of portraits of Elizabeth II from her birth until his death in 1980. And in more recent years, Canada’s homegrown rock star-turned-photographer, Bryan Adams, has become a palace favourite. One of his standout images, commissioned for the Golden Jubilee, features the smiling monarch seated primly in a mudroom beside a row of Wellie boots and a leaning black umbrella. The image has a guarded humour that most other formal portraits lack.

In recent decades, traditional royal portraiture has fallen out of fashion. And yet we still have an insatiable desire to gaze upon updated images of our head of state. Photography, many critics suggest, might be the answer. The painting might be dead, but long live images of the Queen. 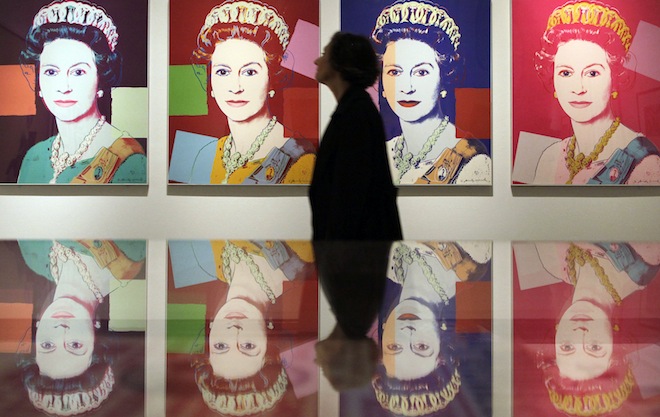 A woman walks past silkscreen prints by Andy Warhol at the National Portrait Gallery. (Stefan Wermuth/Reuters) 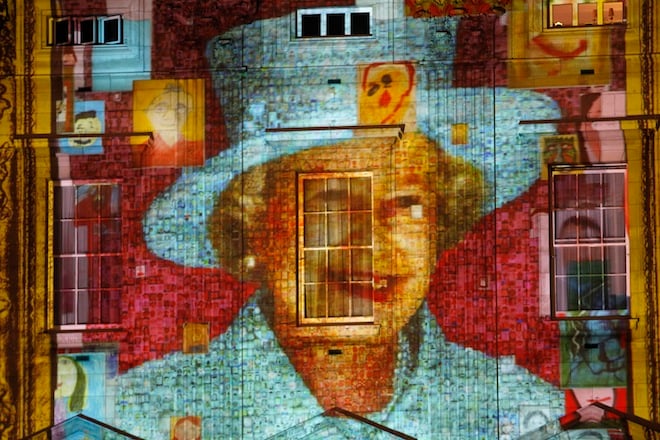 Self portraits by 200,000 children are projected onto Buckingham Palace to form portraits of Queen Elizabeth in central London on Apr. 19, 2012. (Andrew Winning/Reuters) 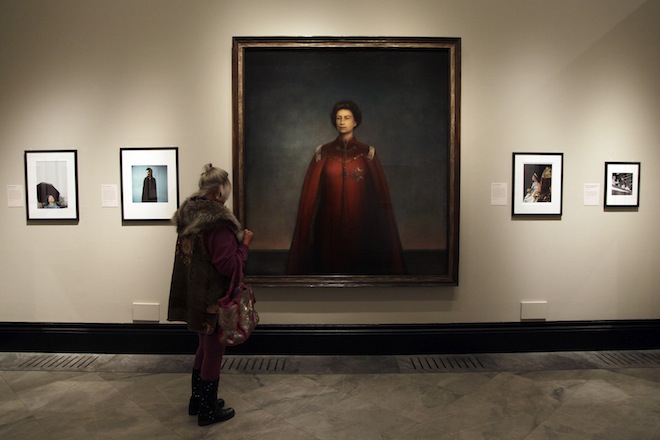 A man looks at a painting of Queen Elizabeth by Pietro Annigoni during a press view at the National Portrait Gallery in London May 16, 2012. (Stefan Wermuth/Reuters) 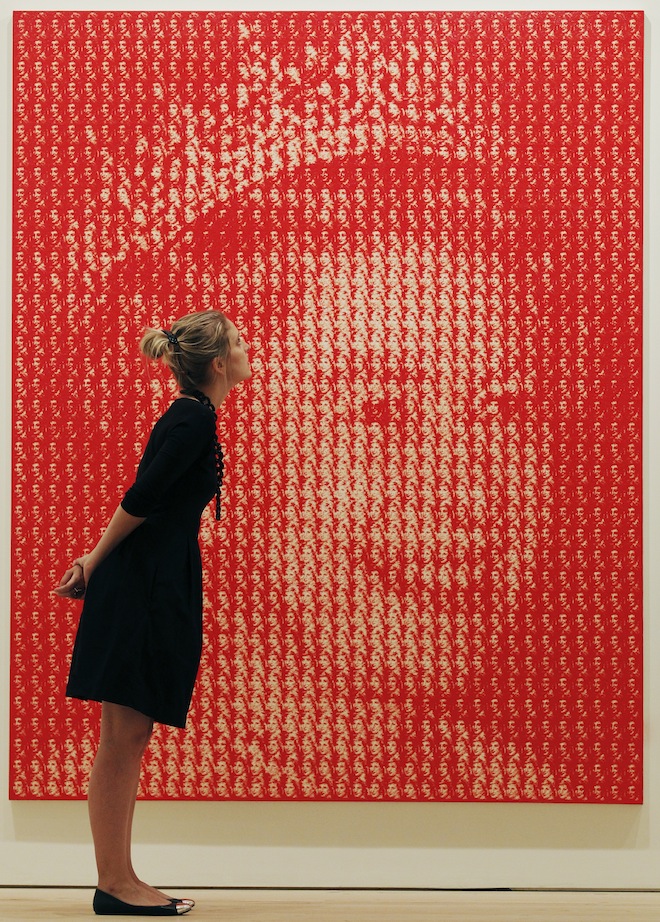 A woman poses with Kim Dong Yoo’s painting Elizabeth II vs Diana, a giant oil of Britain’s Queen Elizabeth made up of scores of faces of Diana, former Princess of Wales, at the Saatchi Gallery in Chelsea west London July 5, 2010. (Luke MacGregor/Reuters) 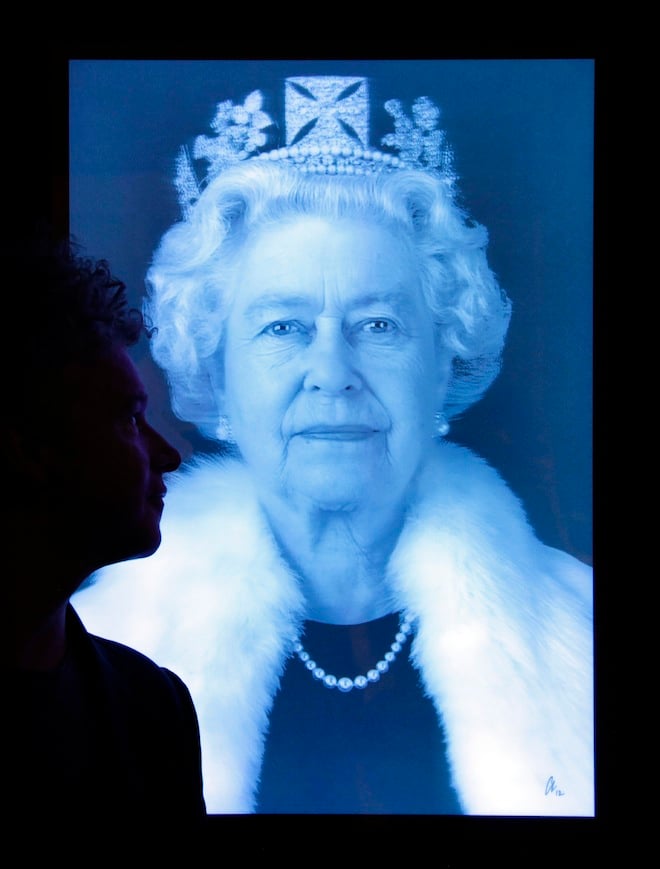 Artist Chris Levine poses next to his lenticular image of Queen Elizabeth during a press view at the National Portrait Gallery in London May 16, 2012. (Stefan Wermuth/Reuters) 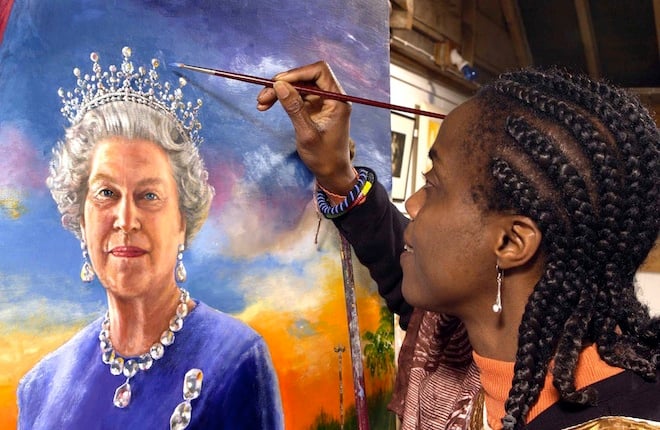 Nigerian artist Chinwe Chukwuogo-Roy adds the finishing touches to a  portrait of Queen Elizabeth commissioned by the Commonwealth to mark her 2002 Golden Jubliee, on March 10, 2002. (Ho New/Reuters) 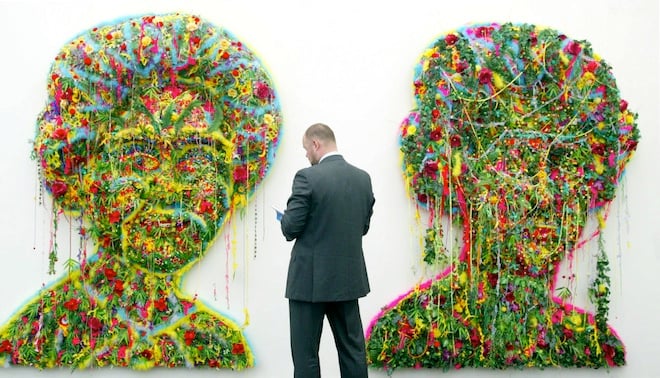 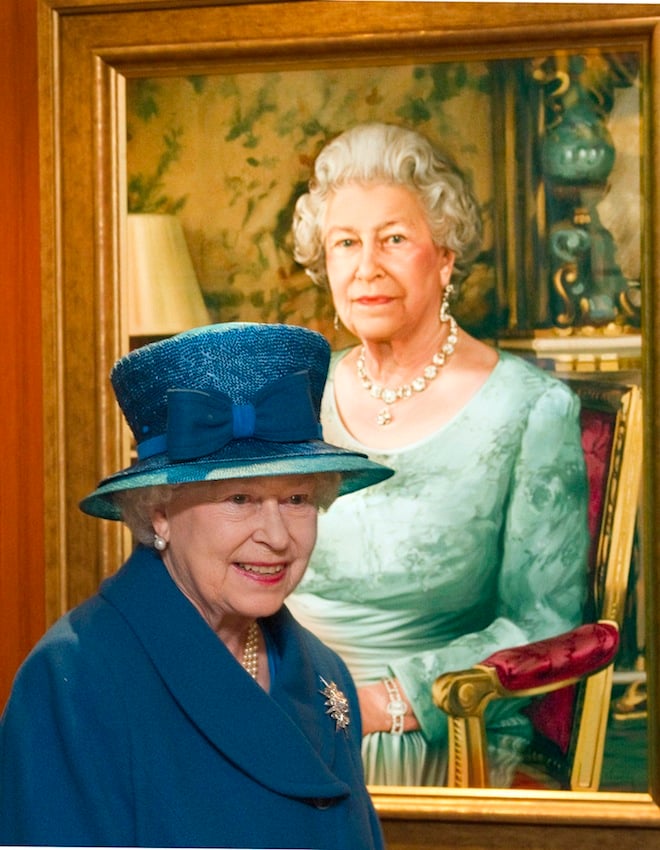 Queen Elizabeth passes a portrait of herself as she tours the new liner ‘Queen Elizabeth’, before the official naming ceremony at the Ocean terminal, in Southampton, southern England on Oct. 11, 2010. (Arthur Edwards/Reuters)