California, where terrifying wildfires are a rhythm of life

Image of the Week: Nothing but heavy rain seems capable of halting the infernos wracking the state. Same goes for ball games. 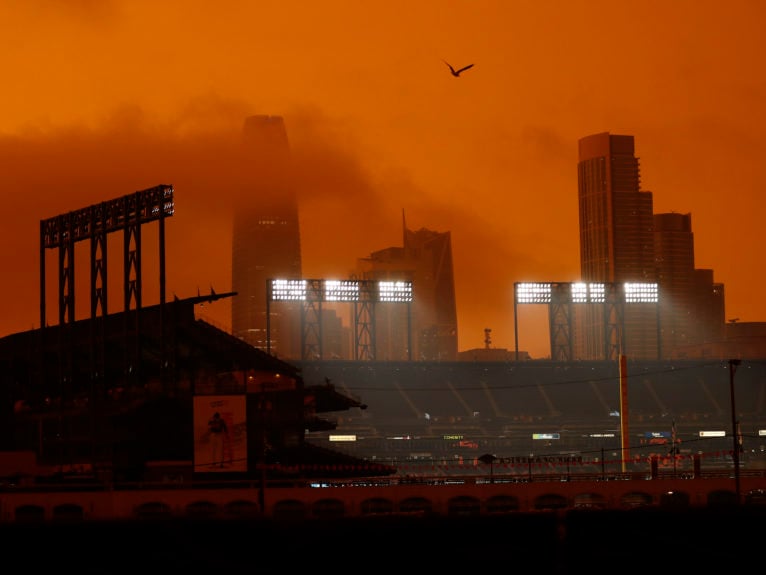 Breaking wildfire records has, tragically, become an annual event in California. In 2017, the fires razed more property than ever before (more than 10,000 buildings over 1.3 million acres), setting a new record for destruction—that is, until the next year, when flames blanketed two million acres and demolished more than 24,000 buildings, killing more than 100 people in the process. This year, colliding with a global pandemic and bitter presidential election, the blazes have engulfed nearly three million acres (another new record!), and though property damage and deaths have, mercifully, remained relatively low so far, the sheer scope of the fires has interrupted everyday life for millions of Californians. But if Americans can find ways to keep life chugging along with a sense of feigned normalcy during COVID-19, why not during a literal inferno? People commuted to work, tucked their kids into bed and snapped selfies against the backdrop of a nightmarish orange sky. The execs over at Major League Baseball, ignoring heaps of ash dusting their seats, were assured the air quality was safe enough for a game to proceed. So it did. The San Francisco Giants ended up crushing the Seattle Mariners 10–1. Maybe those poor Washingtonian athletes got distracted by the hellfires raging a few kilometres away. It wouldn’t faze the Californians—by now, regrettably, they’re used to it.

FILED UNDER: California wildfires Editor's Picks Image of the week