After Brexit, a political revolution in the U.K.—for women 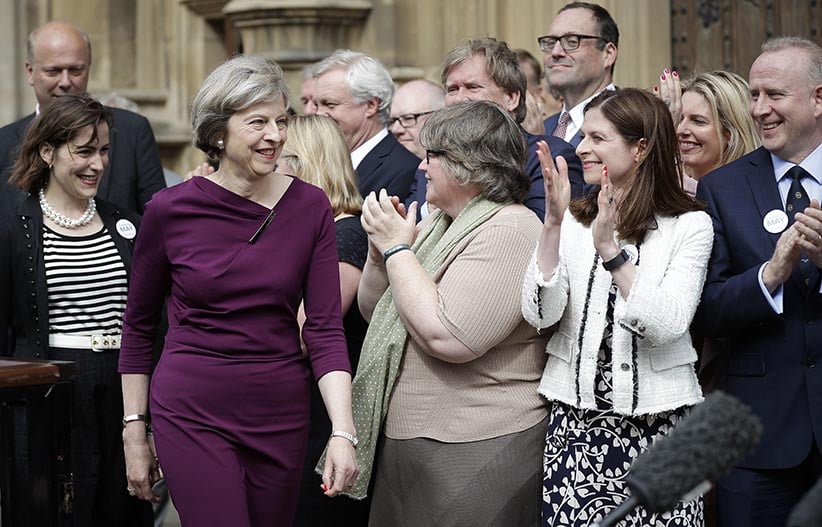 Much has been made in the post-Brexit political chaos, now settling into a dull but throbbing national hangover, of the unexpected ascendance of women in British politics. After a referendum campaign dominated by a Conservative cabinet of privately educated white males—most of whom attended Oxford University within a just couple of years of each other—the news that the two front-runners in the new Tory leadership campaign were two meritocratic, hardworking women seemed a much-needed breath of fresh air in a dust storm of dispiriting news.

In the corner labelled “experienced and capable” was the long-serving Home Secretary Theresa May. In the corner labelled “change,” hard-right newcomer Andrea Leadsom. This week, Leadsom pulled out of the race, paving the way for May to become Britain’s second female prime minister in a union currently dominated by women leaders. It certainly seems worth celebrating in itself. Nicola Sturgeon is first minister of Scotland, Arlene Foster holds the same post in Northern Ireland and Leanne Wood just narrowly lost her spring challenge for the top post in Wales. On the other side of the British House of Commons, the biggest human threat to embattled Labour Leader Jeremy Corbyn is former shadow cabinet minister Angela Eagle, who announced this week she will challenge him if his party can ever figure out how to force a leadership review. Eagle is one of Britain’s only openly gay female politicians, which makes the changing landscape look even more diverse.

On the international stage, Britain looks to be on trend as well. It’s impossible not be struck by the thought of the next G8 Summit dominated by Angela Merkel, Hillary Clinton and Britain’s next Iron Lady. Our own sensitive new-age Prime Minister is undoubtedly contemplating the feminist selfie opportunities with relish.

So far, so inspiring, right? Not really if you pause to consider the fact that this shift in identity politics has come at time when various far-right movements pushing regressive views of minorities, gays and women’s reproductive rights have been springing up all over the Western world, from Donald Trump  to the U.K. Independence Party. In light of recent events, it doesn’t seem plausible to make the argument that we are living in a golden age of social progress.

And yet, when Britain swears in its next prime minister, it will in some ways be even more historic than Margaret Thatcher’s win back in 1979. According to the Pew Centre for Research, 56 per cent of countries in the world have never had a female head of government. But among those who have, the vast majority have had only one—and then never again. To have a second female leader will give Britain entry into a highly exclusive club that includes only a teeny-tiny handful of countries, including Norway, New Zealand and Bangladesh, who have had more than one female head of government, elected or appointed.

It’s hard to talk about this apparent gender revolution in the world of Western politics without sounding weirdly retrograde—the whole point of gender equality being, after all, that women are just as capable (and potentially incompetent) as men. And yet it’s hard not to agree with Jóhanna Sigurðardóttir, the former Icelandic prime minister who recently wrote in Newsweek Europe that it looked like the women had been sent in to clean up the political mess left by men, post-Brexit. Quoting one of Iceland’s best known feminist poets Ingibjörg Haraldsdóttir, she mused: “When all has been said / when the problems of the world / have been dissected discussed and settled . . . a woman always arrives / to clear the table / sweep the floor and open the windows / to let out the cigar smoke / It never fails.”

Undoubtedly, here in Britain, the political damage done by the schoolyard games of Boris Johnson, Michael Gove, David Cameron and Nigel Farage have left the country in a perilous state of economic uncertainty and deep cultural division. The question of whether Britain’s next prime minister will be able to tidy it up in the cheerful and efficient manner of Mary Poppins and her magic carpetbag is yet to be seen.

But for anyone hoping that what proved to be a brief two-way female Tory leadership race might have raised the tone of British politics—currently at an all-time low after the vicious backroom machinations of Brexit referendum—the news wasn’t promising. Last weekend, before quitting the race, Leadsom gave an interview in which she stated that she was a better candidate for the top job on account of the fact she is a mother and May (who has admitted to her own struggle with infertility) is not. The childless Home Secretary, she said, “lacks a stake in the future.”

So much for women playing clean.