How long-range snipers do their job

After a record-setting shot by a Canadian sniper in Iraq, we look at the physics and intuition of extreme, long-range shooting 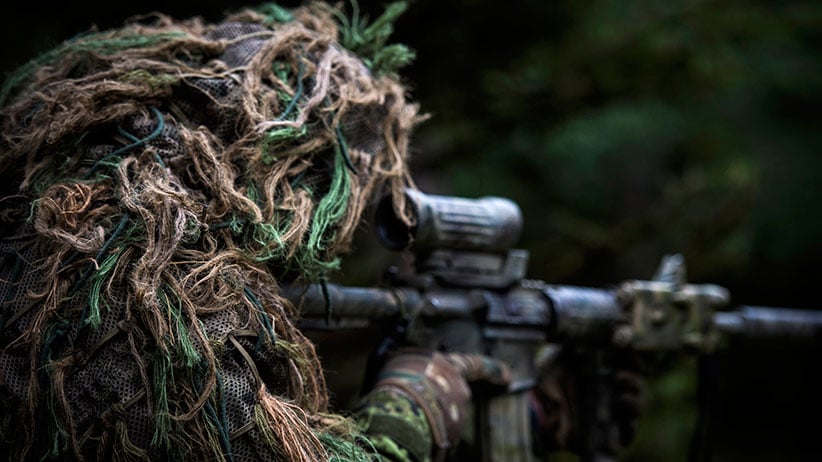 The Canadian military confirmed this week that a sniper with Canada’s elite special forces crushed the world record for the longest-known kill shot. The unnamed shooter hit and killed his target in Iraq at the staggering range of 3,540 metres—more than a kilometre further than last record set in 2009 by British sniper Craig Harrison in Afghanistan.

To pull a trigger and have it hit a target thousands of metres away is a remarkable feat. It requires fine-tuned physical and cognitive skills, coupled with a savant-like awareness of how a bullet travelling over 1,000 kilometres per hour will interact with the complex environmental conditions along its trajectory. Indeed, long-range sniping is a combination of physics, art and luck. Here we look at the obstacles that stand between a sniper and their target, and how they adjust to land the shot.

Gravity
At short distances, up to 100 metres, a shooter can line a shot up, pull the trigger and, all other factors accounted for, can hit what appears in the crosshairs. Beyond 100 metres the bullet begins to drop along its trajectory as gravity’s pull starts having a greater effect. The shooter then has to aim above the target in order to hit it. That distance between the target and the shooter’s aim is called elevation. The further from your target, the greater the elevation. Keith Cunningham, a marksmanship instructor in Minden, Ont., and former sniper for the U.S. and Canadian militaries, calculated that the elevation required to hit a target 3,540 metres away with a .50-calibre rifle would be 137 metres. “So pick a spot 137 metres above your target and aim at that,” he says. “That’s way up in the sky some place.” Luckily, adjusting for elevation is somewhat automated, using what’s called the elevation knob on the rifle. This lets the shooter look straight at the target and still have the bullet fire above that. That said, Cunningham says he’s never heard of a rifle that can account for 137 metres of elevation. He estimates the shooter would have had to holdover—a term for aiming above the target—by about 70 metres on top of adjusting for elevation on the rifle.

Wind
As soon as the bullet leaves the barrel, any movement of air causes it to drift. Like a canoeist fighting a current, you need to aim beyond the destination in order to compensate for the forces working against you. Snipers apply what they call windage to make sure that their bullet doesn’t drift in the wind. To do this, they use indicators in the field near their target, like drifting smoke or dust, and estimate how fast they’re moving in the wind. Some snipers may have the hand-held anemometer that calculates the wind speed more accurately, but only in their own vicinity. “To get an accurate reading for the wind is really, really difficult at these extreme long distances,” says Cunningham. “You can certainly become good at it out to 1,000 metres, maybe even 1,500, but when you start doubling that, then it becomes incredibly difficult to get a good reading throughout the entire path of the bullet.”

Spindrift
When a bullet is fired, it spins like a drill-bit towards its target, and depending which way it spins, the bullet will drift left or right. The amount of drift also depends which way the wind is coming from and how much distance the bullet is traveling. For example, at about 1,000 metres, with no wind, a bullet with a right-hand spin will drift about a metre to the right. If the wind is coming from the left, you have to add an additional metre (two metres total) per 1,000 metres of range to compensate for that wind pull. If the wind is coming from the right, then you have to subtract that drift per 1,000 metres of range. In theory, it’s an easy calculation. But chances are it won’t be exact. As the bullet slows down, the spindrift slows too, which is trickier to account for.

The Earth’s rotation
According to accounts from the Canadian Armed Forces, the recent record-breaking shot hit its target 10 seconds after the trigger was pulled. Meanwhile, the Earth kept spinning. Accounting for the planet’s rotation depends on the direction of the target. If it’s easterly, the bullet will land higher than the shooter aimed. If the target is westerly, the bullet will shoot low. If you shoot straight north or south, where the axes of the Earth are, there will be no effect at all.

Temperature, humidity and altitude
A bullet moves slower, and therefore drops faster, in dense air. By that logic, the more humidity in the air, the more elevation the shooter adds. At higher altitudes, however, the air becomes thinner, causing the bullet to travel faster, and the shooter then subtracts elevation. Bullets may travel at higher speeds on hot days, too, but only if there’s little to no humidity.

The temperature of the ammo has a similar effect: hot bullets travel faster than cold ones, and their temperature needs to be factored in when adjusting elevation.

Grouping
“Rifles don’t shoot like a laser beam,” says Cunningham. “If you shot a series of shots with the exact same point of aim, everything being exactly the same, it would not put every bullet through the same hole.” That’s largely because the bullets themselves are not made perfectly equal. Some have slightly more powder, some are heavier, or vary in shape and size. And of course, there’s human error. The shooter’s breathing, or the angle of their finger when they pull the trigger, may disturb the shot. Indeed, the myriad uncontrollable factors lead to what shooters call group theory: that no matter how perfect the setup, the bullet will land in a range, or “group”, near, but not directly at, a given target. The greater the distance from the target, the larger the group. In other words, “the further out you go, the more luck you need,” says Cunningham.

Equipment
As a sniper in Vietnam, Cunningham had to make all these adjustments manually. Today, the process is much more automated. Snipers now plug in figures like wind speed, humidity, distance, altitude, and spindrift into a ballistics computer program which then calculates where the shooter should aim. But while the programs offer a good indication of where to shoot, they’re little more than an enhanced guess, says Cunningham. “The only way you can ever know for sure what the required elevation is at a given district is to actually shoot that rifle with that ammo on that day and hit your target.”

Spotting
The spotter is the unsung hero of the sniper pair. While the shooter sets elevation and windage on the gun and fires good shots, the spotter’s job is far more involved. Typically they’re using much better optics than the shooter and are responsible for identifying the target, making a wind call, and telling the shooter when to pull the trigger. Once the shot’s fired, the spotter looks for whether the bullet hit the target. If not, the spotter quickly tells the shooter how to adjust, and another shot is fired. “The sniper of course gets credit for the shot,” says Cunningham. “He becomes the instant hero, when in fact it was the spotter that provided the vast majority of the information to make that kill possible.”