In Northern Ireland, the Troubles are brewing again

The police are calling two recent murders IRA revenge killings. And the fragile coalition governing Stormont hangs in the balance. 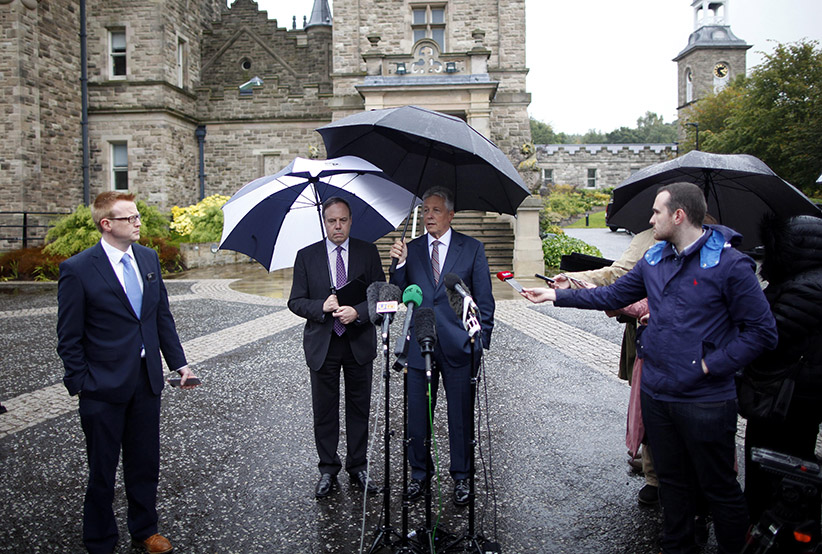 This week, Northern Ireland faced its biggest political crisis in nearly a decade, an event triggered by two recent murders that Belfast police have said were IRA revenge killings.

As the country’s uneasy coalition government teeters on the brink of collapse, desperate talks are taking place in the Belfast parliament of Stormont that will determine the future of Northern Ireland and its relationship to the rest of the United Kingdom.

The government—a coalition between several prominent unionist parties and the republican Sinn Fein (formerly the executive arm of the IRA)—stumbles on, but only in what insiders are calling a “zombie state.” Late last week, the unionist first minister Peter Robinson made good on his promise to resign, along with most of his cabinet. However, he stopped just short of stepping down completely by appointing an interim leader to afford the government a few weeks in which to renegotiate—and, one hopes, maintain—the fragile power-sharing agreement that has been in effect since 2007.

The history of Northern Ireland is a long, bloody and politically messy one, but, since the 1998 Good Friday agreement, the Troubles (as the decades of violence between IRA and unionist factions is colloquially known) have largely abated, at least in body count. But, as Susan McKay, the Northern Irish author of Bear in Mind These Dead, a book about the haunting legacy of the Troubles, points out, a deep rift persists. “The fundamental problem,” she said in an interview, “is a deep lack of trust” between all factions.

In this case, the issue at stake is whether the IRA still exists as an organization, even if it’s just a husk of its former paramilitary self. The police say yes, while Sinn Fein’s leaders—party president Gerry Adams and deputy first minister Martin McGuinness—insist the opposite is true. And well they should. For while the 1998 Good Friday agreement set out the political apparatus by which republicans and unionists would share power in Northern Ireland, it was not until 2005 when the IRA released a statement saying it would effectively dissolve itself as a military force that power-sharing seemed possible. By 2007, it seemed the organization had decommissioned all of its arms and left behind old grudges.

But the recent killings would seem to dispute this. Police believe that one of them, the murder of Kevin McGuigan, was carried out as an act of revenge for his part in the murder of yet another former IRA kingpin, Gerard “Jock” Davison, who was killed last May. While the slayings might be chalked up to gang violence—the brutal internal machinations of the mafia-esque version of what is left of the IRA—their occurrence strikes fear and anger into the hearts of those who worked for years to ensure that the organization was dismantled completely.

The current crisis reached a boiling point last week when Bobby Storey, a leading republican and Sinn Fein’s northern chairman, was arrested and questioned by police over McGuigan’s murder. Storey has since been released without charge and, over the weekend, held a press conference in which he insisted that the era of terrorism in Northern Ireland is over, albeit with a strange choice of words. “I think the chief constable and other perspectives out there see this in terms of the IRA being the caterpillar that is still there. What I think is that it’s moved on, it’s become a butterfly, it flew away, it’s gone, it’s disappeared,” he said.

The political crisis has really been brewing ever since Adam’s arrest and questioning last May in connection with the 1972 murder of Jean McConville, a mother of 10. No charges were laid, but that moment, according to McKay, plunged Northern Ireland “back in contemplation of the horrors of the collective past that many were well on the way to forgetting.”

There have been a number of symbolic leaps forward in the peace process in recent times, from the Queen making an official visit to Dublin four years ago to McGuinness attending a state dinner at Windsor Castle earlier this year. But the era of uplifting ceremonies may be over, as Northern Ireland enters into a new phase of soul-searching, one that could see the collapse of devolution and cross-community government in its current form. Officially speaking, Prime Minister David Cameron has the right to suspend the Northern Irish parliament and intervene in a crisis—something unionist leaders have been urging him to do for weeks now.

Cameron has resisted these calls, but is said to be “gravely concerned” about the situation—an emotion he wrestled with by sending one of his ministers to Belfast last Friday while he attended the England-Australia cricket match.

A suspension of the Northern Irish parliament would be extreme, but not be without precedent. The nation’s assembly has been suspended on several occasions since coming into effect in 1998, the longest one being from October 2002 to May 2007, when the decommissioning and destruction of IRA weapons (and decades of forensic evidence along with them) made parliamentary relations too fraught to govern.

Whatever happens, no one is predicting a return to the old Troubles, but a whole set of new ones may be just about to begin.