London mosque attack: 'No ifs, no buts, this is a terrorist attack' 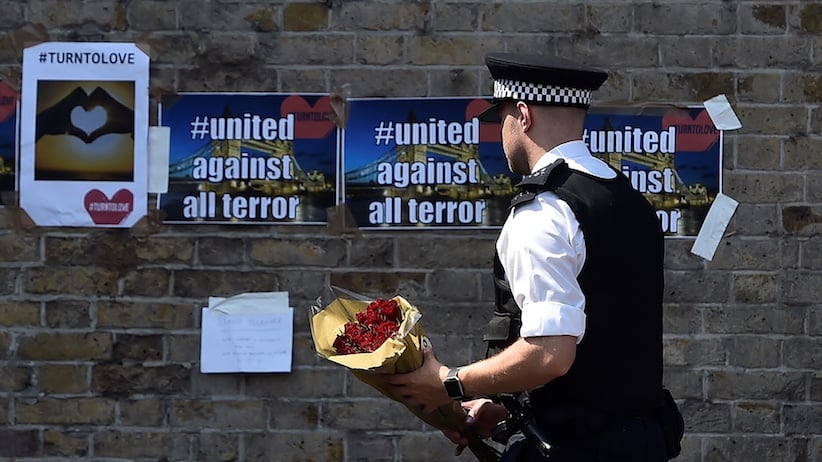 A police officer carries flowers to leave alongside of messages near to where a van was driven at muslims in Finsbury Park, North London, Britain, June 19, 2017. REUTERS/Hannah McKay

The Finsbury Park Mosque in North London is no stranger to controversy.

Once presided over by the radical cleric Abu Hamza-al Masri and a former place of worship for convicted terrorists Richard Reid (the shoe bomber) and Zacarias Moussaoui (linked to 9/11), in 2003, the mosque was raided by the London Metropolitan police because of its links to terrorist groups. But two years later the Finsbury Park Mosque reopened, this time under the governorship of the Muslim Association of Britain—a moderate group that actively opposes religious extremism. The result, in the years since, is considered a great London success story of active cultural integration and community spirit.

Despite the Mosque’s controversial history, the residents of this diverse North London neighbourhood are renowned for “rubbing along together” as the British like to say. While there is indeed a large Arab Muslim population who have settled here, the area is also home to many immigrants from Ireland, the Carribean and Somalia as well.

It was into this high-functioning multi-cultural success story that a lone man decided to drive his rental van in an act of terrorism last night. Just after midnight local time, a white van jumped the curb, swerving into a small crowd of people on the sidewalk who had stopped to help a man who had collapsed on the street.

The ill man later died (though the cause is still unknown) and ten other people were taken to hospital, two with life threatening injuries.

The attack occurred outside the Muslim Friendship Centre across the road from the Mosque. The streets were filled with worshippers who had just left evening prayers after breaking the day’s fast for Ramadan. According to eye witness reports, after hitting the crowd the driver got out of the car and shouted “I want to kill all Muslims!” Onlookers then jumped into action and pinned him to the ground until police arrived. According Abdikadar Warfa, a man who was at the scene and helped restrain the attacker, “He tried to run away, he tried to escape. Some people were hitting him. He was fighting to run away.”

The police arrested the driver, a 47-year-old white man named Darren Osborne, on suspicion of attempted murder. He is currently being held in custody.

It is the U.K.’s the fourth terrorist attack in three months. 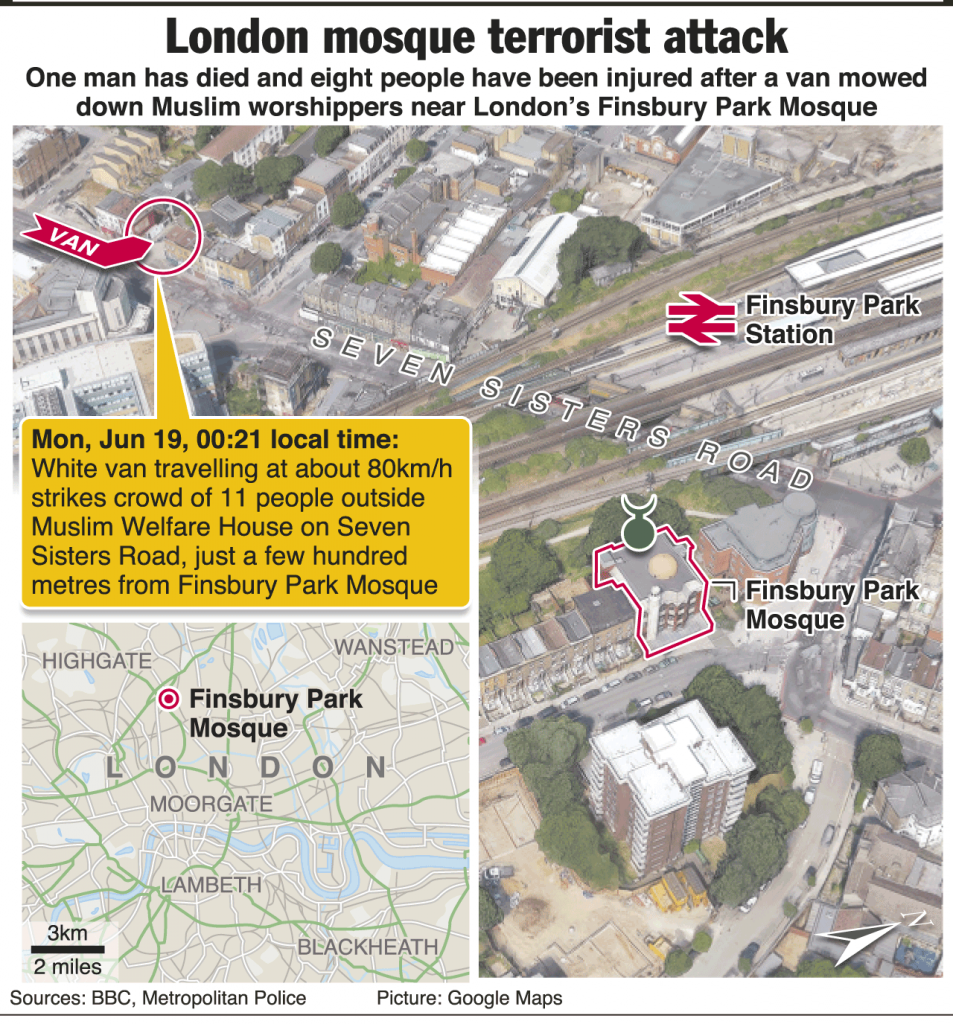 Prime Minister Theresa May said in a statement this morning that the attack had “once again targeted the ordinary and the innocent going about their daily lives—this time, British Muslims as they left a mosque, having broken their fast and prayed together at this sacred time of year.

“Today we come together, as we have done before, to condemn this act and to state once again that hatred and evil of this kind will never succeed.”

May later arrived at the scene and publicly praised the witnesses who helped to detain the attacker. On departing, she was heckled by onlookers. Last week she faced severe criticism for being slow to meet with the victims of the Grenfell Tower fire.

READ MORE: The tragic story of the Grenfell Tower inferno

Speaking on site, London Metropolitan Police Commissioner Cressida Dick has said the incident will be treated as a terrorist attack and promised extra police protection for the Muslim community in the coming days.

Dick said she had just come from a meeting of people of many different faiths from the area who vowed the act of terror would not divide the community. “This is a highly integrated, truly diverse and multicultural place,” she said of Finsbury Park. “The relationships between the police and community here are very important to us, and are mostly very good indeed.”

Security Minister Ben Wallace said the suspect was not known to police but that his actions will regarded as an act of terror. “This man was not known to the authorities in the space of extremism or far-right extremism and he clearly took advantage of a simple weapon, a vehicle, to make an attack on people going about their business,” Wallace said in an interview with Sky News.

“There are no ifs no buts, this is a terrorist attack in the same way the bomber of Manchester blew up many people only recently. This is a pure terrorist attack designed to inflict terror and fear and also hurt people in some twisted cause.”