The U.S.'s most prominent libertarian think tank may be leaning more Republican 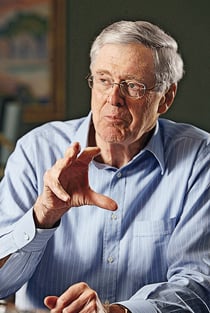 When Charles Koch founded the Cato Institute, it seemed like a perfect match: the billionaire philanthropist and his brother David were leading supporters of small government in the U.S., and Cato quickly became the country’s most prominent libertarian think tank. But lately, the Kochs have decided that this particular free market organization needs a bit less freedom. The Kansas-based energy tycoons have filed a lawsuit against Cato and its president Ed Crane, seeking to gain a majority ownership stake in the institute. “We seek no ‘takeover,’ and this is not a hostile action,” said Charles in a press release. Not everyone is convinced.

Though the Kochs fell out with Crane years ago—“Crane had been insufficiently respectful of Charles’s management philosophy,” Jane Mayer wrote in The New Yorker—the current conflict isn’t personal, it’s ideological. In recent years, the Kochs have become more directly involved in electoral politics: their group Americans for Prosperity played a major role in the 2010 Republican sweep of the House of Representatives. But under Crane, Cato has sometimes been willing to take positions at odds with both political parties; it’s the only think tank reliably “informed by more than partisan convenience,” liberal journalist Ezra Klein once wrote.

That’s what the Koch brothers are seeking to change. Senior fellow Jerry Taylor told libertarian blogger Jonathan Adler they have already rid the board of some of its “strong, principled libertarians,” replacing them with friendlies with a more reliably conservative bent. One of the nominated board members is John Hinderaker, a lawyer who once called George W. Bush “a man of extraordinary vision and brilliance approaching to genius.”

Above all, the Kochs want Cato to become more Republican; the New York Times reported that David Koch asked the institute to provide more “intellectual ammunition” to groups like Americans for Prosperity. The brothers, according to Taylor, have complained that Cato “wasn’t doing enough to defeat President Obama,” or “working closely enough with grassroots activists like those at AFP.” The Kochs are ferociously anti-Obama. Charles once compared him to Saddam Hussein and described the 2012 election as a war “for the life and death of this country.”

Some libertarians have been outraged by the attempt to force Cato into a more Republican-friendly posture; Julian Sanchez, a Cato fellow, wrote a “pre-signation” letter announcing he would leave if the Kochs succeed: “I’ll be sad to go, if it comes to that, but sadder to see a proud institution lose its autonomy.”

Liberal commentators, meanwhile, have cackled at what they see as the backfiring of libertarian philosophy: Cato thinkers who spent years defending employer and shareholder rights are appalled by the Kochs’ attempts to exercise those same rights. “There is something intrinsically hilarious about a think tank that celebrates the wisdom of the free market fighting for its life against a hostile takeover,” says Alicublog’s Roy Edroso. “It’s like Timothy Treadwell in Grizzly Man treating those wild bears as pets and then getting eaten by them.”