The Dallas police 'bomb robot' that killed a sniper

Why the police sent in a robot to kill the Dallas sniper, in a move with no apparent precedence in U.S. policing 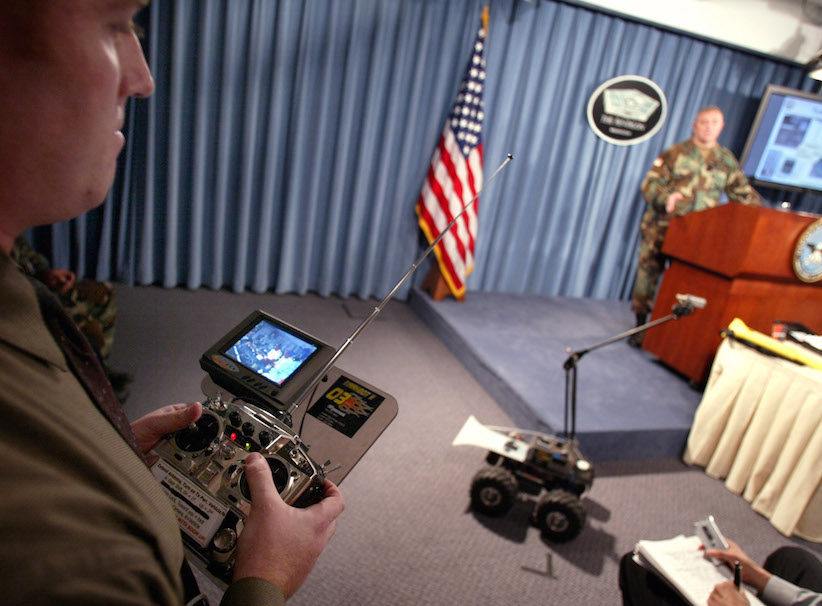 A MARCbot robot, similar to the one used by Dallas police, in demonstration at the Pentagon in Washington, D.C. in 2005. REUTERS/Yuri Gripas

Authorities in Dallas deployed a remote-controlled “bomb robot” to kill the sniper who opened fire on police officers last night—a controversial tactic that appears to have no precedence in North American policing.

During a Friday morning news conference, Dallas Police Chief David Brown corrected reports that 25-year-old Micah X. Johnson—who reportedly acted alone, killing five officers and wounding seven others—took his own life after the rampage. Instead, Brown said, his officers cornered the suspect on the second floor of a parking garage and negotiated with him “for several hours.” Only after those talks broke down, and gunfire was exchanged, did police resort to the extraordinary step of sending in the robot.

“We saw no other option but to use our bomb robot and place a device on its extension for it to detonate where the suspect was,” Brown told reporters. “Other options would have exposed the officers to grave danger. The suspect is deceased as a result of detonating the bomb.”

Police forces across the United States and Canada commonly use bomb-disposal robots to clear potential explosives from a scene, or surveillance robots to see what the naked eye cannot. During hostage negotiations, such devices also double as couriers—delivering to a suspect everything from a cellphone to supper. But experts can’t recall another instance when police used a remote-controlled robot to bomb a suspect.

Although it’s not clear which specific device was used against Johnson, some reports say it was a MARCbot, a bomb-disposal robot common to the U.S. military—and sold in large numbers to American police forces. Very similar in appearance to a remote-controlled truck, a MARCbot was jury-rigged by soldiers in Iraq, at least once, to kill an enemy fighter.