The new battle over Confederate monuments 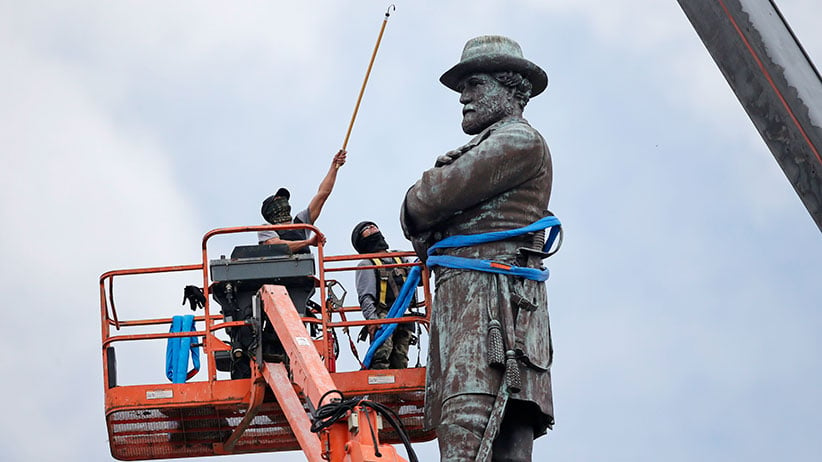 There was a warm, humid breeze last Friday morning, as the sun rose over Confederate General Robert E. Lee for the last time.

Crowds gathered the night before—some to celebrate with brass bands and dancing, some to protest dressed in green camouflage and waving Confederate-era flags. By morning, construction crews and a crane arrived, and by midday onlookers chanted “Take them down!”

For two years, the city had been filled with the protest refrain: “Take down Robert E. Lee! And all symbols of white supremacy!” And then, the stately bronze statue of Lee, which for more than a century lorded over the city of New Orleans from atop a white pedestal 84 feet off the ground, was toppled.

“To literally put the Confederacy on a pedestal in our most prominent places of honour is an inaccurate recitation of our full past, it is an affront to our present, and it is a bad prescription for our future,” said the mayor, Mitch Landrieu, in a celebratory speech to family of civil rights icons Homer Plessy, descendants of Georgetown slaves, and to rows of national and international media, as Lee was coming down. “Today we reclaim these spaces for the United States of America.”

The event marked the end of a turbulent multi-year effort to remove from New Orleans’s public spaces four monuments, erected during the Jim Crow era of the late 1800s and early 1900s, venerating Confederate-era figures and events. Landrieu called them remnants of “The Cult of the Lost Cause,” a white supremacist movement, and “terrorism as much as a burning cross on someone’s lawn.” The statues are being stored—one in a city junk yard—until the city finds them a new home, perhaps in a museum.

To some, the monuments have become a proxy war for so much else: relations between black and white Americans, the battle between right wing white nationalist groups and extreme-left anti-fascists who’ve clashed in the city, America’s strained urban and rural divide, and polarized Democrat and Republican politics. To others, they’ve opened a Pandora’s box of division and discontent.

Undeniably, they’ve raised questions about the state of racism and white supremacy in the South. And there’s fear of anti-Confederate contagion. On May 15, Louisiana house lawmakers passed—largely along party lines—a Republican-sponsored bill to ban all future removal of any military monument or plaque unless approved in a vote by local residents. The state’s Legislative Black Caucus walked out in protest and “disgust.” The bill moved to the senate.

To the chairman of the Black Caucus, it revealed one thing: a modern, “deep-rooted belief in white supremacy and a desire to revere those who fought against the United States of America in the American Civil War.” Rep. Joseph Bouie said some witnesses who testified in a hearing on the bill claimed “the South will rise again,” and suggested black Southerners “should just get over slavery and just grow up.”

Politicians who supported the bill told him later they were bowing to constituents under the weight of hundreds of pro-monument phone calls, he said. The bill’s sponsor, Rep. Thomas Carmody Jr., argued it’s about giving residents more power.

The monuments debate has pitted the mayor, Mitch Landrieu, a popular figure from a Louisiana political dynasty, against the city’s more conservative business leaders, including investor Frank Stewart, whom Landrieu criticized for not supporting the monuments’ removal. In a fiery, full-page ad in a local newspaper, Stewart railed against Landrieu’s “self-serving” attempts to “eradicate history,” calling the monuments “magnificent,” comparing them to the Egyptian pyramids, and claiming “New Orleans has always been inclusive and diverse.”

“Stop blaming us for our forefathers’ actions,” Stewart wrote.

Landrieu has described an “institutional pullback” against removing the symbols of the Confederacy “that’s much, much deeper than perhaps we thought.”

“There has not been one white ruling class person in this city denounce the presence of the white supremacists in the city, nor has one come out in support of taking (the statues) down. That speaks volumes to where they actually stand,” said Michael Suber, a leader of the Take Em Down NOLA activist group. It has spearheaded efforts to remove not just these four Confederate monuments, but dozens, perhaps more than 100, and even re-name city schools.

New Orleans, like Charlottesville, Virginia, has become a flashpoint for alt-right groups who’ve traveled to the city to guard monuments and clash with anti-monument demonstrators. When Take ‘Em Down NOLA held a march in early May, white nationalists descended upon the Lee monument wearing homemade shields and helmets. One man bore the image of Pepe the frog, a now infamous symbol of the alt-right. “You are anti-white!” he shouted. Another’s shirt read: “Diversity IS JUST A genocidal SCAM.”

As the horse-mounted statue of General P.G.T. Beauregard came down last week, protesters carried flags of the Confederacy, and Donald Trump and decried the destruction of “history” and “heritage”. As with every statue’s removal, there were jeers, screaming matches, fights and physical threats between those celebrating and protesting the monument’s demise. Crews wore face masks and worked under heavy security from police and SWAT teams, in the dark, to remove the statue — part of the city’s response to a wave of threats.

Chris Kimble, who lives outside the city, said an ancestor, Enoch Hurst, served under Lee. The Confederate Virginia battle flag, of which he owns two, is “a connection to him, a guy I never met, who fought for something he believed in,” he said, as he watched the Beauregard statue come down.

“The whole evil of slavery is placed solely on the white Christian man of the south,” Kimble added. And while he said he understands Confederate monuments are offensive to some, he asked: “Why are their feelings more important than mine?”

That’s been a common criticism. So is suggesting the monuments should remain, but with added plaques to explain the history. So is questioning how removing the monuments could actually improve the lives of New Orleanians, or whether the money could have been put to better use.

“I care about the wasted money. We have high crime, we don’t have no police force, the fireman aren’t paid enough money. They’re spending, they’ll say $600,000, but millions to tear down history,” said Deborah Walner, who waited to see Beauregard’s statue hoisted away. Next to her, a young black woman, who didn’t want to give her name, argued the statues aren’t about history. “It’s about you honouring a man who represented white supremacy,” she said. “This is man who thought I was three-fifths of a person. It’s the symbolic meaning of it.”

Richard Marksbury, a former dean of Tulane University and member of the Monumental Task Committee, has fought the monuments’ removal at every step, including the group’s last ditch—and failed—lawsuit this month (the last of a series of court battles). He called the mayor a hypocrite for not also removing other statues, including that of U.S. president and slave owner Andrew Jackson.

The city’s past four black mayors never made the monuments an issue, Marksbury said (another regular criticism), arguing the controversy was “man-made” by Landrieu in 2015—after the Charleston shooting of black Christian worshipers by a white supremacist—in hopes it would land him in the now non-existent cabinet of a President Hillary Clinton. Instead of achieving Landrieu’s goal of “racial reconciliation,” the mayor’s “created the most racially divisive issue in this city for half a century,” Marksbury said.

But it’s not clear the monuments actually created tensions, or simply revealed them. A 2016 Louisiana State University poll found that while 88 per cent of white people think the monuments should stay, only 47 per cent of black people agree. New Orleans is not only a predominately black city, but also a solidly Democratic one in a sea of Republican red. And despite its “bonne temps” reputation, it’s home to dramatic inequality between white and black residents, a struggling education system, high unemployment and rising crime rates.

“This is New Orleans. People say it’s a melting pot, we’re gumbo,” said Suber. “But the harsh reality is this is one of the poorest cities in the nation. We lead the world in incarceration, so that is a real reflection that the white ruling class in this city has decided that the black man, we’re not going to have any jobs, and the surplus, we’ll put ‘em in jail.”

The city is wrestling with its history, said Darcy McKinnon, a local filmmaker shooting a documentary about the monuments, tentatively titled “Neutral Ground.” She also sees an important and serious debate being derailed by “absurdist” rhetoric.

To others, the ability to protest the monuments, one way or another, is seen as a privilege.

“Ma’am, I have seven children and 14 grandchildren. You think I have time for this?” asked a black woman who was just getting home from her job at a tourist seafood restaurant, and stopped by the Beauregard protest near her house.

“I don’t give a damn if they’re coming down,” she said. “I’m still going to work in the morning.”