Photographer John Moore reeled off a series of vivid but disturbing frames on that moonless night: 'I could see the fear in their faces, in their eyes' 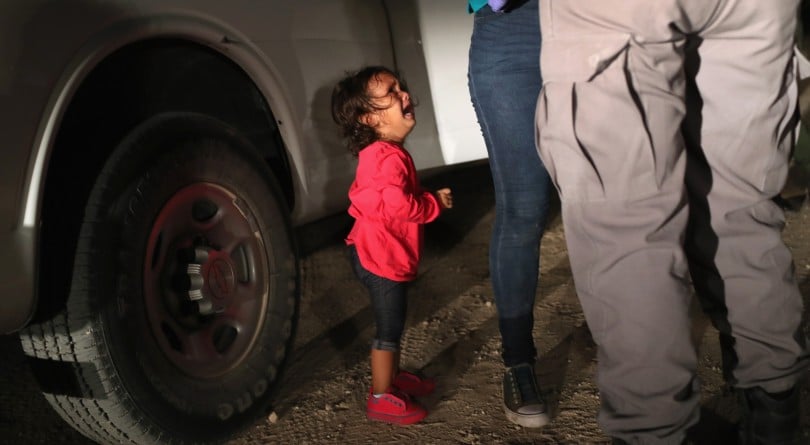 A two-year-old Honduran asylum seeker cries as her mother is searched and detained near the U.S.-Mexico border on June 12, 2018 in McAllen, Texas. The asylum seekers had rafted across the Rio Grande from Mexico and were detained by U.S. Border Patrol agents before being sent to a processing center for possible separation. (John Moore/Getty Images)

No image has galvanized revulsion toward Donald Trump’s “zero tolerance” immigration policy like the one showing a two-year-old Honduran girl crying—the only light coming from the vehicles around her—as a U.S. border patrol agent searches her mother near the Mexican border. The photo is taken from the little girl’s eye level, while the adults stand over her, out of frame.

The image has been seen and shared by millions, as Trump’s controversial policy of taking asylum-seeking children from their families and holding them in U.S. foster care—while their mothers and fathers are jailed and criminally prosecuted—draws fierce criticism. It’s been estimated that nearly 2,000 children have been apprehended at the U.S.-Mexico border since April, as part of a practice a human rights official with the UN has called “unconscionable.”

John Moore, an award-winning American photographer with Getty Images, captured the photo while patrolling with border agents on Tuesday in Texas’s Rio Grande Valley. “It was a moonless night,” Moore told NPR in a recent interview. “We came across a group of undocumented immigrants, mostly families, women and children. And I could see the fear on their faces, in their eyes.” The agents took names and when it came time for the mother to be searched, they asked her to put down her daughter: “At that moment, the young child broke into tears, and she started wailing,” Moore said.

Moore spoke to the mother, who told him they had been travelling for a month. Then they were rushed in a van and taken away. “I do not know what happened to them. I would very much like to know,” Moore said. “Ever since I took those pictures, I think about that moment often.”

Here are more images captured by Moore in the Rio Grande Valley: 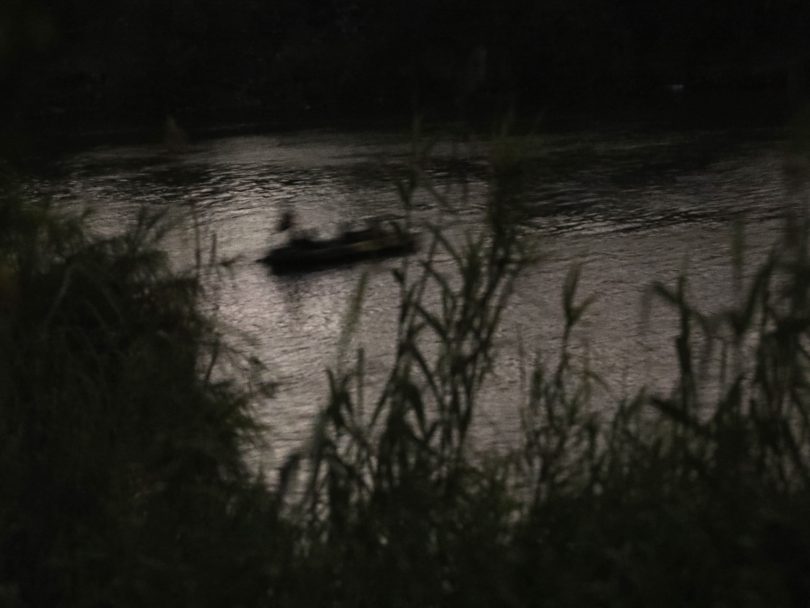 Under a moonless sky, a group of Central American asylum seekers is rafted across the Rio Grande from Mexico into the U.S. on June 12 in McAllen, Texas. They were later detained by U.S. Border Patrol agents and then sent to a processing centre for possible separation. Customs and Border Protection (CBP) is executing the Trump administration’s “zero tolerance” policy towards undocumented immigrants. U.S. Attorney General Jeff Sessions also said that domestic and gang violence in immigrants’ country of origin would no longer qualify them for political asylum status. (John Moore/Getty Images) 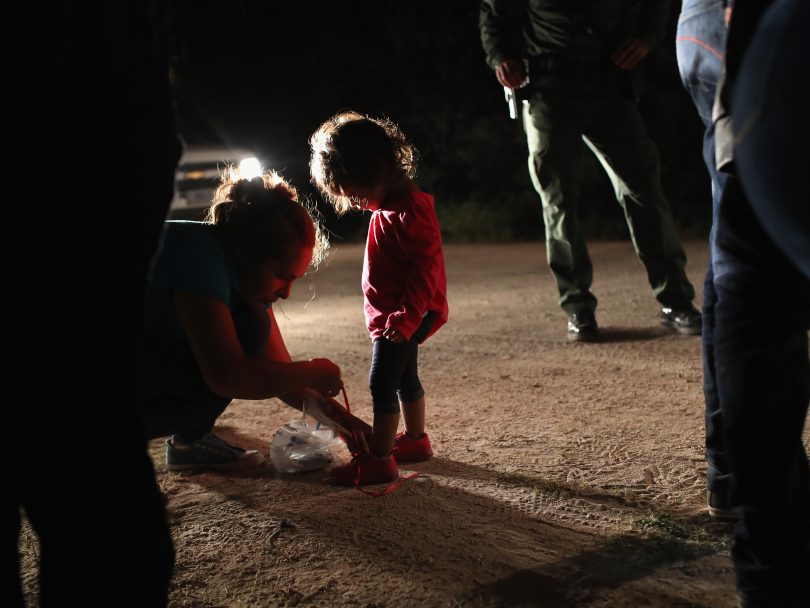 A Honduran mother removes her two-year-old daughter’s shoe laces, as required by U.S. Border Patrol agents, after being detained near the U.S.-Mexico border in McAllen (John Moore/Getty Images) 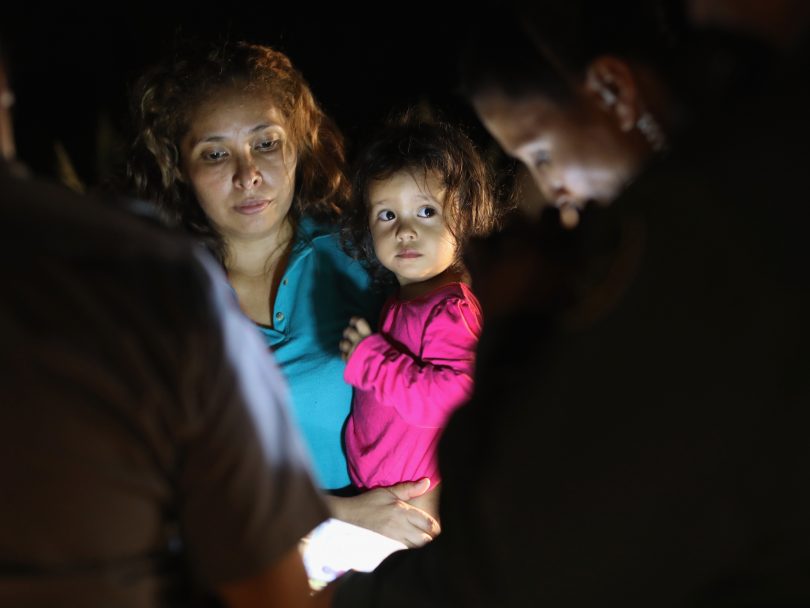 Central American asylum seekers, including a Honduran girl, 2, and her mother, are taken into custody near the U.S.-Mexico border (John Moore/Getty Images) 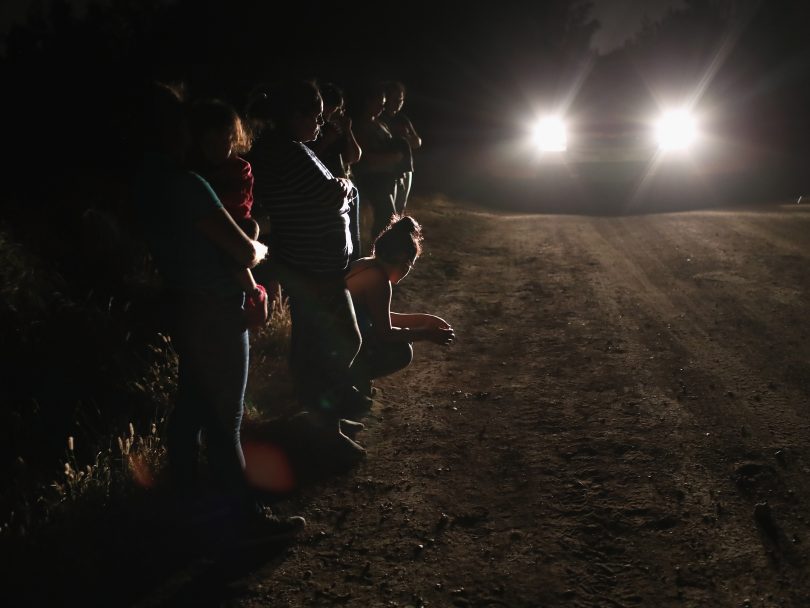 Central American asylum seekers wait for transport while being detained by U.S. Border Patrol agents near the U.S.-Mexico border on June 12 in McAllen. (John Moore/Getty Images)