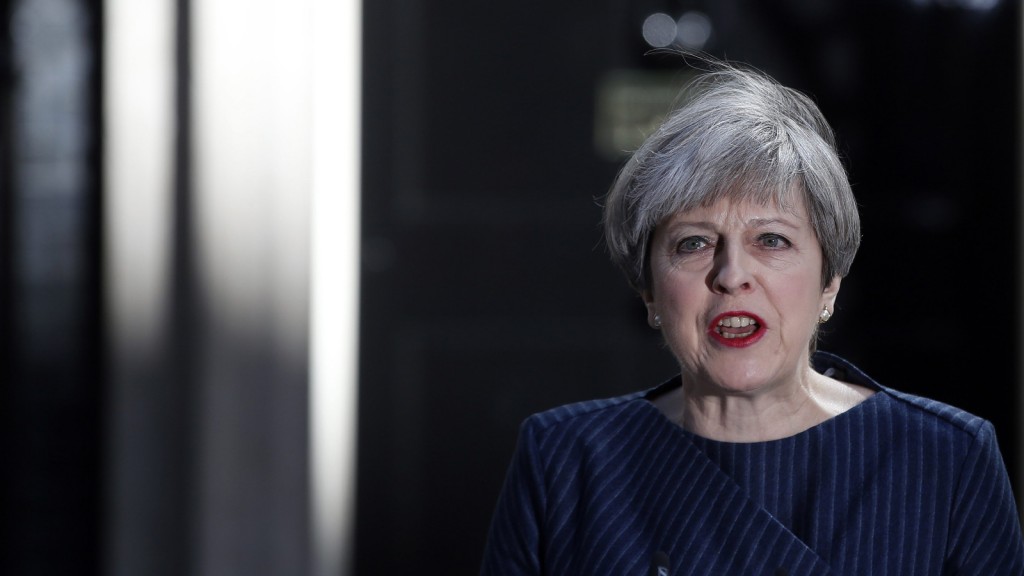 Britain’s Prime Minister Theresa May arrives to speak to the media outside her official residence of 10 Downing Street in London, Tuesday April 18, 2017. May announced she will seek early election on June 8 (Alastair Grant/AP/CP)

It was the best kept secret in contemporary British politics—until it wasn’t.

Yesterday, Prime Minister Theresa May’s announcement that she would be holding a snap election on June 8 took the public, the media, and many of her own ministers utterly by surprise.

After promising up and down for months that she would not subject the vote-weary British public to another unwanted election campaign, May suddenly reversed her position on Tuesday, citing resistance on Brexit from the opposition and House of Lords as her motivation. But the truth is more complicated than that.

READ MORE: Why did Theresa May call for an election?

According to Westminster insiders, the real reason for May’s startling political U-turn was a dawning realization that the Brexit negotiation timetable—now set in stone by the triggering of Article 50—would leave her government open to unpalatable long-term political risk.

Previously, May had pledged to adhere to Britain’s Fixed Term Parliaments act, which stipulates that her government wouldn’t need to call the next election until 2020. But with the end of two years of arduous Brexit negotiations now set for 2019, May and her staff  began to realize she had a serious strategy problem on the horizon.

As BBC political editor Laura Kuenssberg outlined in her blog yesterday, the government realized that winding up Brexit negotiations while preparing for an election would spell political disaster down the line. “The government would be exposed to hardball from the EU because ministers would be desperate to avoid accepting anything that would be politically unpopular, or hold the Brexit process up, at the start of a crucial election cycle.

Naturally, May was eager to represent her change of heart as a decision she came to for the sake of the nation regardless of her own political future.

“I genuinely came to this decision reluctantly having looked at the circumstances and having looked ahead at the process of negotiation,” she told reporters after the announcement. “I want this country to be able to play the strongest hand possible in those negotiations and be in a position to get the best possible deal. That is in our long-term interest. That is what this is about.”

RELATED: Brexit is about to begin. Here’s what you need to know.

But as in most big political climb-downs, there was of course a hefty dose of pragmatism at play. It’s fair to assume she simply saw no other way out.

Calling an election is always a gamble; however, this is especially true today, when the only thing certain seems to be the fact of uncertainty itself. The polls, if you believe them after their Brexit failure, are suggesting that May will win a handy majority, which is an enticing prospect for her government.

The opposition under Jeremy Corbyn is decidedly weak and polling poorly, which will also have factored into May’s decision. While Corbyn welcomed the election announcement, hailing it as a chance for a change of government, many in his party rolled their eyes. After a meeting of Labour MPs on Tuesday night, Corbyn was said to have been greeted with decidedly tepid applause. The press reported one unnamed MP as jokingly instructing colleagues, “Go back to your constituencies and prepare for…the Guardian jobs page.”

Some even took the opportunity to urge him to resign. John Woodcock, the Labour MP for Barrow-in-Furness who will be standing for re-election, posted a Facebook video saying Corbyn ought to stand down “rather than lead Labour to defeat”.

READ MORE: Britain, Brexit and the fight over spaghetti bolognese

This yawning gap in the centre-left of the British political landscape spells a major opportunity for the Liberal Democrats, led by Tim Farron. The Lib Dems have at times been touted as a force to be reckoned with. Crucially, they are the only major political party that will campaign in opposition to a hard Brexit—something a significant number of Britons still support.

But the Prime Minister has been very clear: this election will not hinder the Brexit negotiation process. What it is designed to do is allow her to proceed with negotiations full steam ahead, unfettered by the baggage of the recent past. A new mandate would allow May to put significant distance between her own government and the lingering bad taste of David Cameron’s, who as we all remember spearheaded the unsuccessful Remain campaign.

Even the date, June 8, will have been chosen with care. The election will now fall in the brief window between the upcoming French and German elections, which will mean the U.K.’s campaign period will be brief and in tandem with the two largest European economies at the Brexit bargaining table.

As a piece of political choreography, it’s a fairly shrewd move but also an undeniable gamble. The only thing more dangerous would have been to keep her promise—and that, evidently, wasn’t a risk that Theresa May was willing to take.