The Queen receives Justin Trudeau in the U.K.

After a cordial meeting with the Queen, Trudeau's U.K. stop included a party, questions about foreign policy, and a lengthy speech about Canadian diversity 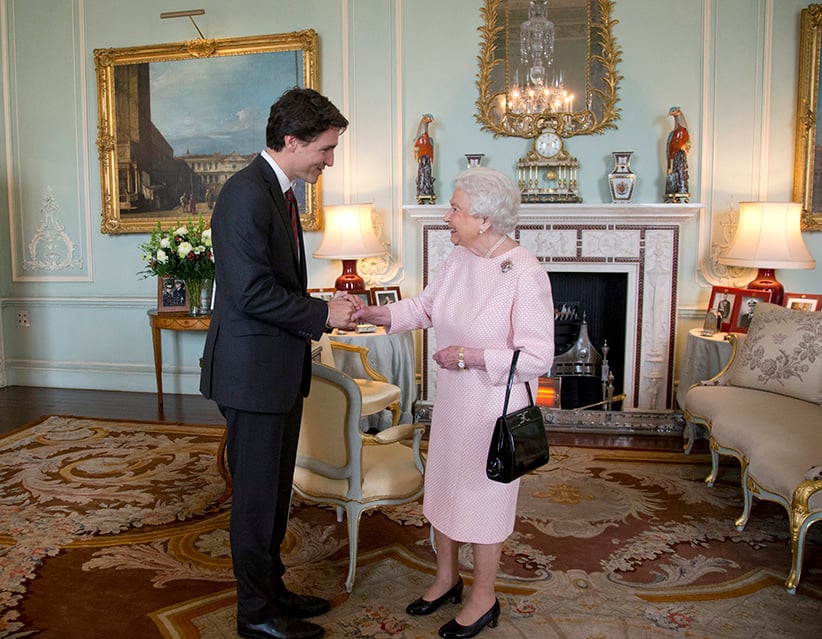 Justin Trudeau arrived in London today and was received at Buckingham Palace by the Queen, who granted him his first official audience as Prime Minister. Wearing a powder pink dress, pearls and carrying a handbag in her own home, the Queen received Trudeau with a bright-eyed smile and a gloved handshake in front of the assembled media. The two engaged in a bit of small talk before retiring to one of the palace’s many royal reception rooms for a private conversation. “I will say, you were much taller than me the last time we met,” Trudeau joked, referring to the occasion he met the monarch during his father’s time in office.

“Well, this is extraordinary to think of, isn’t it,” the Queen answered with a laugh—though it’s hard to imagine Her Majesty of all people would be surprised by the notion of dynastic rule. The two seemed to thoroughly enjoy each other’s company and emerged from the audience 30 minutes later all smiles. The Prime Minister was then whisked with his entourage to nearby Canada House in Trafalgar Square, where Canadian High Commissioner Gordon Campbell hosted a reception in his honour.

The party was attended by some 260 people, mostly Canadian expats living in the U.K., and included Bank of England governor Mark Carney. After some glad-handing with the crowd, Trudeau made his way to the podium where he delivered a speech that took as its main subject the importance of Canadian diversity in an uncertain world.

Related: How Queen Elizabeth II became one of the world’s most influential leaders ever

Trudeau then spent approximately a quarter of an hour speaking in glowing, idealistic terms about the importance of Canadian diversity, both at home and as a guiding principle of our foreign policy. “Diversity isn’t about Canadians being nice and polite, though of course we are,” he said with a twinkle. “It’s about making the world a better and safer place.” He cited the recent terrorist attacks in Paris and his government’s continued participation in the coalition against ISIS as examples of how, for Canadians, the notion of multiculturalism and religious tolerance “isn’t a challenge to be overcome or tolerated, rather it’s a source of strength.”

Taking pains to acknowledge Canada’s many historical wrongs (including our history of slavery, the treatment of First Nations and the refusal of Jewish refugees and internment of Japanese-Canadians during the Second World War), the Prime Minister quoted Martin Luther King Jr.: “The arc of the moral universe is long but it bends toward justice.”

“The more people engage with the breadth of our country’s diversity, the more Canadian they will become. It may have started as a leap of faith but it has become a defining characteristic of our country.”

At a press conference afterward, the Prime Minister answered tough questions about the government’s position on the recent downing of a Russian fighter jet by Turkish forces. Unlike his ally, President Obama, who has defended Turkey’s right to military aggression, Trudeau refused to takes sides, saying that despite the “obvious tensions” between the two countries, “we are trying to de-escalate the situation through diplomatic means.” He went on to speak of the need for cohesiveness among NATO member countries in order to achieve stability in the region.

Related: Mapping out the tangled web of alliances in Syria

On domestic matters, the Prime Minister defended his government’s recently unveiled plan to bring in 25,000 Syrian refugees later than promised, and the reported idea that the screening process will exclude single straight men. “What Canadians expect is for us to do the right thing the right way,” he said, repeating the message conveyed by cabinet ministers in recent days. “It’s not only out of the goodness of our heart that we welcome these people, there are also economic benefits … This is a time when politics could be played for fear and division but we are trying to show that welcoming people in is a good thing.”

After the press conference, Trudeau carried on to 10 Downing Street where he was warmly greeted by Prime Minister David Cameron. The two men retired to Cameron’s private quarters where they presumably discussed matters of state. Tomorrow, Trudeau and his family will carry on to Malta for the Commonwealth Heads of Government meeting followed by the much-anticipated United Nations Climate Change Conference in Paris next week, where he will be joined by a large Canadian contingent which includes Green party leader Elizabeth May and most of the provincial premiers.