Under par: Why a men-only club culture still persists in the U.K. 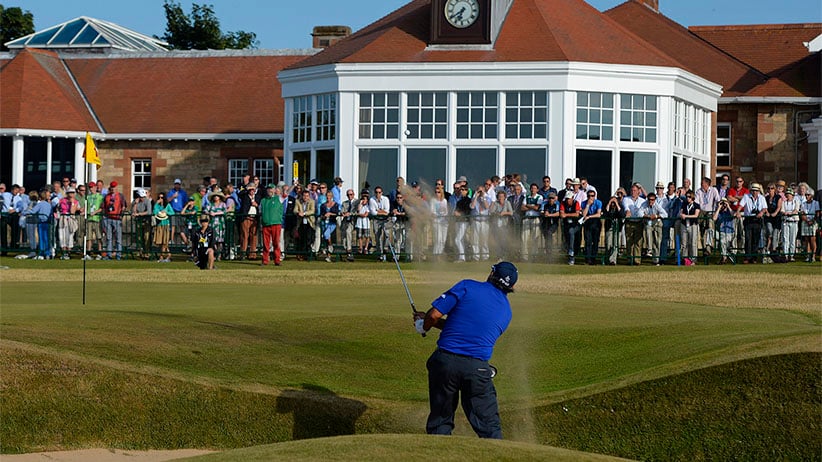 Angel Cabrera of Argentina hits out of a bunker on the 18th hole during the third round of the British Open golf Championship at Muirfield in Scotland July 20, 2013. (Russell Cheyne/Reuters)

Muirfield Golf Club in East Lothian, Scotland, is one of the finest courses in the world and arguably the best in the United Kingdom. But it will not be hosting another British Open anytime soon, having been dropped from the Open’s official roster following a membership vote on May 20 to maintain its historic policy of barring female members.

The controversial decision, which Scotland’s female First Minister Nicola Sturgeon described as “simply indefensible,” came as the result of an extended two-year consultation process in which a two-thirds majority of membership vote was needed for the motion for gender equality to be successful. In the end, of the 616 members who voted, only 64 per cent were in favour, causing the motion to fail by a slender margin of three per cent.

Across the U.K., it’s been perceived as an embarrassing setback for the club, which was harshly criticized in the British media following the announcement. The British golfer Rory McIlroy, currently ranked No. 3 in the world, urged the club to “see sense,” adding that “it’s more of a loss to Muirfield than it is to us.” Prime Minister David Cameron chimed in to condemn the decision, adding that he fully supports the decision by the Royal and Ancient Golf Club at St Andrews (the British governing body that determines the rules of golf) to ban Muirfield from hosting the Open. The R&A has recently stated that it would not stage the Open “at a venue that does not admit women as members.”

Related: The end of golf in Canada

While golf is a notoriously conservative sport, Muirfield is bucking the general trend in its decision to remain men-only. Royal St. George’s, a course in Kent, allowed in female members last year, while the Royal and Ancient Golf Club at St Andrews only lifted its ban against women members on its own course in 2014. For many of these clubs, a change in policy is a major break with tradition. In the case of the R&A, no full-fledged female member had played the course in the entirety of the club’s 262-year history.

But increased gender equality on the green hasn’t necessarily translated to social change in the more traditional supper clubs of London. The Garrick Club, one of London’s most exclusive social clubs located in the city’s theatre district (and known for its celebrated membership list, which includes the broadcaster Jeremy Paxman and the politician Michael Gove) voted down a motion to include women members by a comfortable majority last summer. And a similar fracas occurred at the venerable and storied Traveller’s Club —a haven for accomplished ambassadors and explorers—when a majority of voting members declined to let in women last year.

In St. James’s, an area near Buckingham Palace, historied clubs like Brook’s, White’s and Boodles—the settings for many a scene in the novels of P.G. Wodehouse and Evelyn Waugh—would sooner allow dogs and cats on the membership roster than humans lacking Y chromosomes. While most of these clubs allow women in as guests (often only during certain hours or in certain areas) others are more hard and fast in their discrimination. At White’s, where David Cameron’s father was a former chairman, the only woman officially allowed past the front door is the Queen.

While it does not look like the rules are set to be changed at most London gentleman’s clubs anytime soon, the issue happily refuses to die. In 2011, the actress Joanna Lumley was nominated to the Garrick Club by her friend, the actor Hugh Bonneville. She was not accepted, obviously, and an angry member is said to have ripped the page containing her name from the ledger and tossed it away. “A small gang of diehards wrote some nasty things beneath the nomination—which was really rather ungentlemanly,” one member recounted to the Guardian after the club’s recent vote on the issue.

In 2014, Anthony Layden, former British ambassador to Libya and Morocco and then chairman of the Travellers Club, produced an 8,000-word paper on the subject of whether to allow in female members after extended consultation with existing members. Reading over the paper —which was obtained and reprinted in its entirety by the London Evening Standard—an unsurprising perspective emerges. It turns out many members of men-only gentlemen’s clubs support the ban on female members because (shocker!) they dislike the company of women. “That a chap can ‘take sanctuary’ in the Smoking Room or Bar is one of the club’s charms, and it would make it a less attractive and distinctly different club should it admit lady members,” said one anonymous member in the report. Another later added: “My experience of the club table at the Oxford and Cambridge Club, where one does unfortunately encounter lady members, is that their presence leads to very different and far less enjoyable themes of conversation.”

While Britain’s Equality Act criminalizes discrimination against women on the basis of gender, private clubs and associations are exempt under the law. The only question left now is whether these dens of inequality will change their policies before their rapidly aging membership renders them extinct.