What Canada can learn from Lee Rigby's murder

A warning from London's day of terror in May 2013 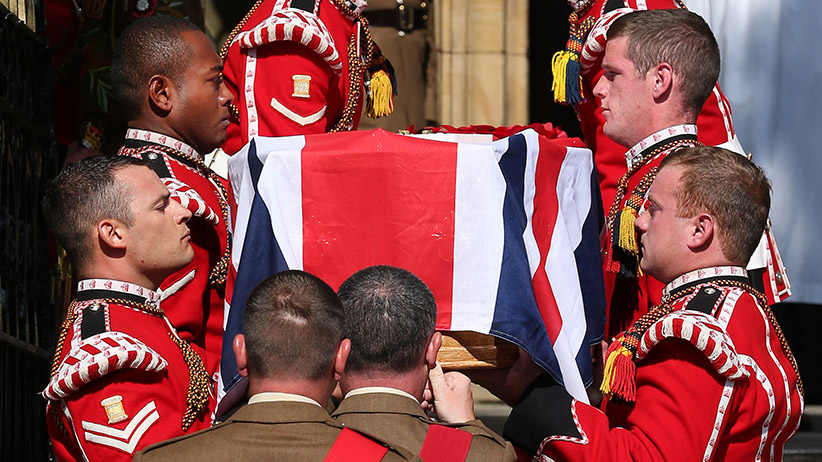 Just after 2 p.m. on an overcast afternoon in May 2013, an unarmed soldier was killed while walking from the Royal Artillery barracks in Woolwich, a community in southeast London. His name was Lee Rigby and he was 25, a fusilier drummer and an engaged father of a two-year-old son. His murder would change Britain forever and, sadly, not for the better.

Rigby’s killers were Michael Adebolajo and Michael Adebowale, two young British men of Nigerian descent. Like Cpl. Nathan Cirillo’s shooter in Ottawa, they were converts to Islam. While little is known about Adebowale’s background, Adebolajo was born in Lambeth, in south London, and attended Greenwich University. It was there he met Adebowale and conspired to commit an act of murder meant to bring attention to their self-described cause: the plight of “Muslims dying daily by British soldiers.” Adebolajo had been arrested in Kenya in 2010 and deported back to Britain after travelling on a false passport. He was reported to be planning to train with the Somali terrorist group al-Shabab, well known for its links to al-Qaeda.

Even as acts of terrorism go, the off-duty soldier’s murder was particularly barbaric. It is difficult to describe the astonishment that such an act of unbridled violence could happen in the calm, leafy streets of one of London’s quiet outer boroughs. Like Canada, Britain is a place where violent crime is on the wane and firearms are for shooting geese.

Nonetheless, the two men hit Rigby with their car while he was crossing the road andz—armed with a gun they did not use—proceeded to hack him to death with knives and a cleaver. After this, they pulled his body to the middle of the road and waited on the sidewalk for police to arrive, which they eventually did. The suspects were apprehended by force.

In the meantime, several brave passersby stopped and stood guard over Rigby’s body as he bled to death, attempting to protect him from further harm. One woman, a Cub Scout leader, had a stern conversation with the murderers and demanded they hand over their weapons, but they refused. Another videotaped the remarkable exchange on his cellphone. The footage, which was later controversially broadcast on several TV and online news outlets, shows Adebolajo standing a few feet away from his victim, justifying his crime in a wild-eyed monologue. “You people will never be safe. Remove your governments, they don’t care about you,” he says. “Tell them to bring our troops back . . . Leave our lands and you will live in peace.”

What happens to a city—or even a whole society—when its quiet streets are sullied with an unprovoked act of terror? If the aftermath of Woolwich offers Ottawa any example, the answer is fairly chilling.

Within hours of the murder, the ministry of defence advised British soldiers against wearing their military uniforms in public (the moratorium was later relaxed). While politicians, military spokespeople and members of the Muslim community expressed their condolences and called for peace, the London Metropolitan Police dispatched 1,200 extra officers to guard against attacks on Muslim communities.

Despite this, a vicious backlash prevailed. There were fires in mosques and women were assaulted for wearing headscarves. The anti-violence group Hope Not Hate reported 193 Islamophobic incidents, including attacks on 10 mosques in the week after the murder, a handful of which were violent and resulted in arrests.

The far-right British National Party (BNP) seized the opportunity to stoke the fires by blaming the government’s policies on immigration for the attack. Several people who publicly condoned the killing were arrested and sentenced for hate crimes. In June, an anti-immigration protest rally in Woolwich was planned by the BNP but police denied the permit to march from Lee Rigby’s former barracks. Instead, the march took place outside Whitehall, British government headquarters, in central London. There, in a mass demonstration, supporters of the BNP and the English Defence League clashed with the anti-fascist demonstrators. In the end, more than 58 arrests were made.

The always-voluble British media, of course, ran with the story. Long after the news stopped coming, the analysis and opinion continued with anti-immigration screeds from the right and anguished pleas for tolerance from the left. The cultural wound created by the incident was reopened time and again. The panic such a killing incites can be contagious—and fear left to fester all too quickly turns to hate.

On Dec. 19, 2013, both Adebolajo and Adebowale were sentenced to life in prison. The former was given a whole life term and the latter a minimum of 45 years behind bars. The judge handing down their sentence condemned their crime as a betrayal of Islam while the two killers shouted him down, calling him a liar and fighting with security guards in the dock before being hauled off to jail.

The family of Fusilier Lee Rigby watched silently and wept.