Opinion: Canada's row with Saudi Arabia suggests it may be time to focus on survival, rather than evangelism, when it comes to Canada's worthy values on the world stage 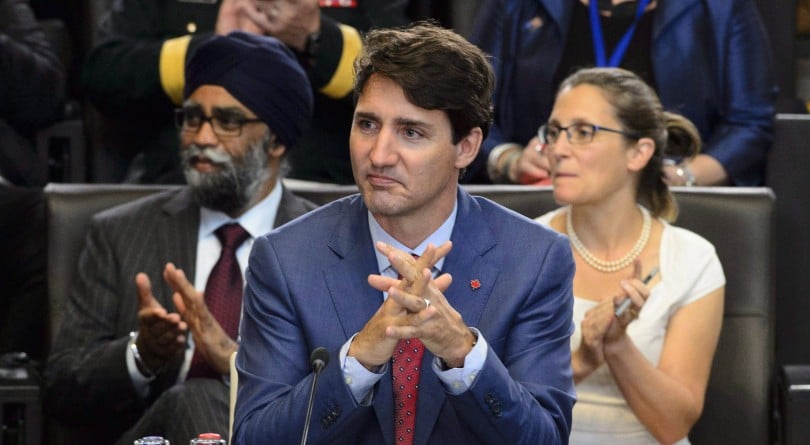 Maybe it’s the extra drivers now clogging Riyadh’s roads. Perhaps it’s the extreme summer heat. But whatever’s got the Kingdom of Saudi Arabia all worked up, it’s decided to take it out on Canada.

Dennis Horak, our man in Riyadh, is persona non grata. Saudi students in Canada have been ordered to return home. New trade and investment between the countries: halted. Saudi flights to Toronto: suspended. All for a Canadian government tweet that called for the “immediate release” of civil society and women’s rights activists, a stock standard Western call that the Kingdom has ignored for all of its existence. “Overreaction” doesn’t begin to describe the Saudis’ response.

Then again, having hurled many balls of reform into the air at home while under pressure from Iran abroad, perhaps Mohammed Bin Salman Al Saud simply didn’t appreciate the preachy talk from someone he thought he was doing business with, as evidenced by Saudi Arabia’s much-talked-about arms sales to Canada.

But whatever the case, Canada appears to have misjudged the moment. And we should face it: it’s becoming a bit of a trend.

The swings and misses abroad have been coming at regular intervals for Justin Trudeau and his government over the past nine months. First came last fall’s acrimonious APEC summit, where the Japanese and other allies were clearly caught off-guard by Canada’s reluctance to sign off on the revised Trans Pacific Partnership trade deal, which was the main expected outcome of the meeting; media reports blamed Trudeau’s no-show for killing those talks. Reportedly, Canada was seeking stronger protections for Canadian culture, supply management and intellectual property, while pushing for provisions for gender, environment and labour. (The deal was eventually ironed out, months later.)

Then the government briefed that Trudeau’s second trip to China would bring home the elusive prize of “progressive” free trade negotiations, only to see talks founder as Trudeau was forced to leave his trade minister behind in the hopes that a schedule for talks could be agreed. No talks were launched, and this year, China’s ambassador to Canada said his country would never accept the progressive elements of Canada’s trade agenda.

Next came the subcontinent. And the less said about Trudeau’s trip to India, the better. Whatever the plan, it misfired badly, devolving into substantial host criticism for its cultural appropriation and questionable invite lists.

Trudeau’s planned gender-equality-focussed G7 summit in Charlevoix then ran headlong into Donald Trump’s trade tantrums, and although a watered-down communiqué committing to a “rules-based international order” was eventually agreed upon, it was quickly revoked via a series of not-so-presidential tweets from Air Force One (though, in an almost parodic twist, it turns out that because Trump cannot rule by Twitter fiat and must go through official U.S. organs, the communiqué remains intact, according to Buzzfeed News).

And what about NAFTA? Well, things are janky there too. What started as a “tweaking” in Trump’s mind’s eye has now morphed into a major re-negotiation, one that’s not likely to include Trudeau’s favoured “progressive chapters.”

Now the howl from Saudi Arabia. What’s next? Frogs raining down from the sky? A plague of locusts? Or perhaps just a snub on the temporary UN Security Council seat for which Canada is currently campaigning?

Some will argue these setbacks are a price worth paying in order to be principled on the world stage. Canada’s values are Canada’s values, and if Trudeau is being punished for being a Boy Scout in today’s bad-boy world, then so be it.

But at what cost?

Forget Saudi Arabia; Canada’s trade with the country is negligible. But if NAFTA ends up redone to our dissatisfaction or, heaven forbid, throttled completely, all the progressive talk of the past few years will be a cold comfort to those thrown out of work. At that point, we’ll be going to places like India and other emerging markets on bended knee, anxious for a deal. How many nos should we take in the current hostile climate before changing tack?

If politics is the art of the possible, then surely diplomacy is too. Progressive ideals might be smart, just and worthy, but if no one is buying, then what is there to sell? This isn’t an argument to park Canada’s values. But every country’s foreign policy is a fudge; you have to pick your moments to make your point, especially when your ideas are the ones that are unpopular.

Indeed, it may not feel this way from inside Canada, but the reality is that Canada’s values are the ones under attack on the global stage; countries like Italy and Austria have elected politicians who have espoused, in some ways, Trump-like ideas that threaten the liberal global order. And notably, Canada’s rebuke does not seem to have been endorsed by other governments around the world so far. The need to defend our ideals’ shores is more piqued than the need to evangelize, especially with the United States, the true upholder of Canada’s values on the world stage, taking its Trumpian turn.

If it’s not clear yet, it will soon be obvious that the country most hurt by the United States’ inward turn is Canada. And there’s precious little that Canada can do about it, something people like the Saudis might have factored into their thinking. If the United States isn’t there with us, shoulder to shoulder, then we’re just an annoying voice, no matter how true our words. When you’re a country of Canada’s size and international weight, you need your friends to help you make your points. It’s what makes the approach to the Saudi situation unusual, as the go-it-alone approach is less effective when it’s employed by a country with our medium-sized influence.

Was Canada ever going to get what it wanted in a global order abandoned by the United States? Or were we always going to die trying? If the past few months are any indication, it’s not a question that appears to have been debated seriously within government. We are stuck in the same (noble) gear we’ve been in for the past three years, with little to show for it. It begs the question: Would the Trudeau government have been better served by modifying its asks in the face of these significant global headwinds? The government’s supporters will label the question treasonous—but that doesn’t make it a question not worth asking.

The question for Canada now: What can we do about it? We might not like it, but the answer might be toning down our rhetoric abroad while keeping the fires lit at home—at least until the United States gets itself together. Unfortunately, until then, the next few years might be more about survival than spreading our wings.