Canada's farmers aren't a monolith—and for many of us, the USMCA is a good thing

Opinion: Dairy farmers are fuming over Canada’s concessions in the ‘new NAFTA.’ But the reality is that most Canadian farmers need strong, global trade 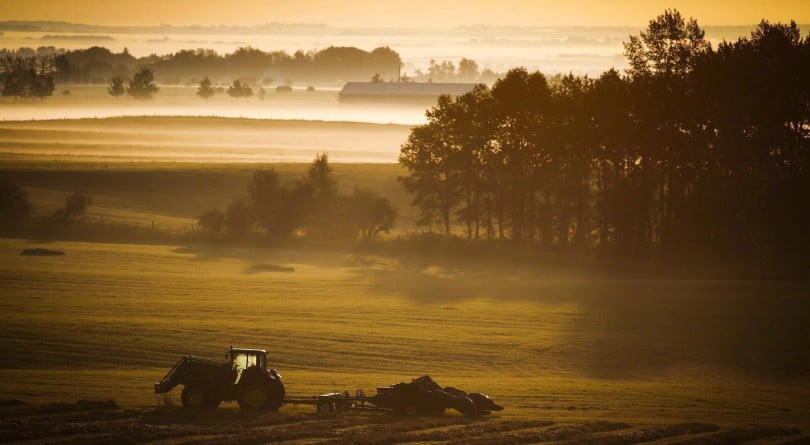 Toban Dyck is a farmer and writer living in southern Manitoba.

The food grown by Canadian farmers—a group that includes me—feeds the world. The crops we produce are largely sold into a global network of grain buyers, transport companies, brokers, and processors. It’s a market to which Canadian farmers are highly vulnerable, and we’ve become used to operating with a heightened sensitivity to other markets—to a global market.

If there’s a drought in Russia, commodity prices will rise as, suddenly, the world doesn’t have as much wheat as anticipated, and if this were to happen, we’d know about it; it’s above-the-fold news. The weather in Brazil or Argentina, where the growing season determines global reserves ahead of our spring, is on our radar. Our own politicians see us, but we’re far away, and so we have to work to raise our voices. We’re largely thinking well beyond our own farmyard.

But in the U.S., things are a bit different, where economic solipsism can sometimes rule the day. And it manifests as an often proud and stubborn belief that its agricultural stability and food security does not hinge on good relations with any other nations; some U.S. farmers have remained relatively unaware of just how dependent their country is on imports.

President Donald Trump models this attitude well, but it existed before his term began. As Trump continues to play fast and loose with America’s now fragile relationship with China, introducing new tariffs, increasing existing tariffs and otherwise playing a long, stubborn game will only end with someone else fixing the problem and him saying, “See? It worked.”

We’ve seen that mentality most recently in America’s forced renegotiation of NAFTA and the announcement on Sunday night of a trade agreement in principle: the United States, Mexico, Canada Agreement (USMCA). We’ve known through his rhetoric that Trump was seeking major concessions over the last 13 months, in particular in agriculture, where Canada’s dairy farmers—bolstered by our country’s supply-management system—appeared to be a ripe target. I know this myself, because when I spoke to Greg Ibach, the USDA under-secretary for marketing and regulatory reforms at a conference in Anaheim, Calif., he told me so: “Don’t worry. Manitoba is not our target.” His finger was clearly pointing at Quebec; in 2017, StatsCan and the Canadian Dairy Commission reported 5,368 dairy operations in Quebec and 3,613 in Ontario, with Alberta’s 523 making them a distant third.

When the then-NAFTA talks started, nervous farmers had trouble mustering confidence that Prime Minister Justin Trudeau would represent their interests in these negotiations; after all, it’s rare that good, effective lawmakers also have a deep understanding of agriculture. When it became clear that the U.S. wanted to dismantle Canada’s dairy supply management model—softening, later, to a mere renegotiation—farmers perked up and got nervous. And now, with Canada giving up concessions on dairy—the federal government has granted the U.S. an additional 3.6 per cent in dairy-market access, and allowed a group of domestically priced products contained under the label Class 7, which include milk-based or at the very least milk-related ingredients such as skim milk powder and milk proteins, to now be bought and sold based on U.S. prices—farmers are reportedly unhappy. And before the USMCA is ratified, there may well be further concessions still to come on dairy, as well as Canada’s other supply-managed sectors, like eggs and poultry.

“This has happened, despite assurances that our government would not sign a bad deal for Canadians,” said Dairy Farmers of Canada president Pierre Lampron in a statement. “We fail to see how this deal can be good for the 220,000 Canadian families that depend on dairy for their livelihood.”

READ MORE: ‘A huge disappointment’: A dairy farmer reacts to the USMCA

But here’s the thing: I am a farmer. But I am a very specific farmer—a grain farmer, and not a dairy farmer. I don’t raise and sell livestock. The distinction is important, not because I want to distinguish myself from those affected by the latest trilateral free-trade agreement between Canada, Mexico and the U.S., but because I want you, the public, to understand and appreciate just how large and nuanced the agricultural industry is.

To have a portion of your annual salary forfeited at the hands of the government to which you pay taxes would be a difficult pill to swallow. It is, however, too easy to cry foul. And for the most part, farmers want borders to be open, and Canada sitting well in a globally competitive marketplace is paramount. We’ll generally laud political maneuvers that accomplish this, and the NAFTA sequel no one north of the border asked for will ultimately satisfy this basic requirement.

“The United States and Mexico are major markets for most Canadian grains and oilseeds, in corn from Ontario, oats from Manitoba and malt barley from Alberta,” said Markus Haerle, vice-president of Grain Growers of Canada, a national lobbying and policy group. “The certainty that the USMCA brings will support Canadian farmers who rely on access to the integrated North American market to succeed.”

Many other commodity groups, think tanks and farm organizations across the country have added their voice to this issue, since the news broke Sunday evening. Most of them echo the fact that in order for agriculture in Canada to succeed, borders need to be open and our trade relationships must remain strong.

Of course, this agitated a sacred cow. Yell “supply management” at a coffee shop in rural Canada and you’ll start something you wish you hadn’t. It’s a polarizing topic that, generally, pits the farmers operating under it against everyone else. And when it comes to dairy, Quebec is king.

There are many who believe it should be actually eliminated entirely, opening up the dairy, poultry and egg markets to the ebbs and flows of a free, open market. Doing so would place them on a level playing field with other farmers who are not protected by pricing systems that are not based on global supply and demand. But whatever the immediate or eventual fate of the supply management system, it is the economic model that has protected Canada’s dairy, egg and poultry sectors for about 50 years. It is a model that supporters are used to fighting for, producers are used to operating in, and naysayers are used to opposing. Old habits are going to die hard.

READ MORE: How dairy became seen as a public resource worth protecting in Canada

But a high-functioning global marketplace is much more advantageous to the average Canadian farmer than a redefined NAFTA. The U.S.’s deteriorating trade relationship with China has driven soybean prices down in the U.S., and Canadian soybeans are by and large priced out of Chicago. The tariffs India has placed on Canadian pulses has crippled lentil production in Saskatchewan. And the European Union remains a fastidious market for Canada and the world. It’s a market we pay close attention to, and one we can’t lose focus on. A rejected shipment could mean a blight on our relationship.

I know that I’m lucky that the USMCA issues did not affect me directly. I look outside at the gravel road in front of my house, and it’s busy with grain-truck traffic, many of them heading to the local elevator. But that’s a reminder too of how important this new agreement is, because those elevators will be unloaded into a global value chain that continually illustrates just how small the world really is when it comes to trade.

We’re hauling soybeans today, and the news of USMCA didn’t interrupt that. Now, let’s move on to other things.