Opinion: When Canada's uniquely powerful majority governments punt the political football to the courts, they do so at the risk of making some voters feel helpless 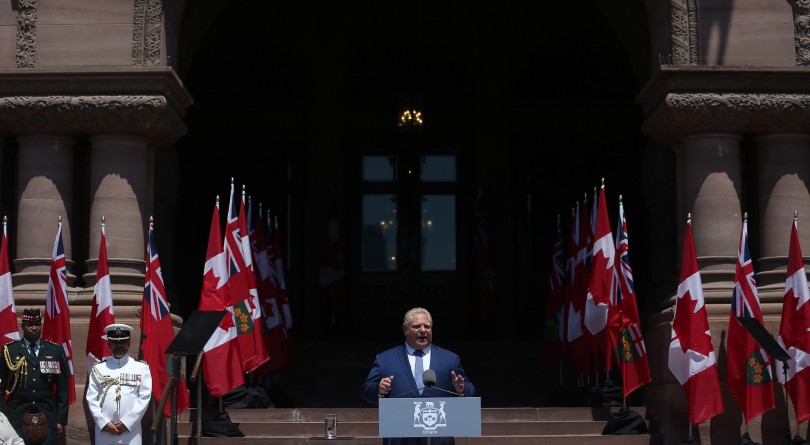 Doug Ford makes a speech as he performs a ceremonial swearing in outside. (Steve Russell/Toronto Star/Getty Images)

Ben Woodfinden is a doctoral student in political science at McGill University. He has been published in Real Clear Policy, Maclean’s, The Ottawa Citizen, and The American Conservative.

It’s been quite the month for Doug Ford and his majority Ontario PC government. After a Superior Court judge ruled his Toronto council slashing Bill 5 unconstitutional, Ford looked to what legal analysts referred to as the “nuclear option” by appealing the ruling and invoking the Charter’s infamous notwithstanding clause that allows provincial and federal governments to overrule certain parts of the charter for a five-year period.

Reaction has been polarized to Ford’s response. Some call it a perfectly legitimate constitutional action, using the Charter as it’s designed, in light of an egregious legal ruling by an activist judge; its critics have denounced the seemingly arbitrary actions of the “Dougtator,” a premier with zero respect for convention, constitutional norms, or the authority of the ruling judge. Much discussion has already been provoked about the notwithstanding clause, too: why it exists, and when it’s appropriate for governments to use it. And now, it is moot: after an all-night sitting and protests in Toronto, the appeals court ultimately ruled to stay the decision—meaning Toronto’s city council will, indeed, be nearly halved ahead of the city’s Oct. 22 election.

But the clash of ideas on offer—between those who worry about legislators stepping all over the charter, and those who worry about judges stepping all over legislators—ignores how we got to this point in the first place. On both sides, there is a clear sense about the other side, whether it’s by judges or populist politicians alike: this is unfair, and arbitrary. This, however, isn’t a problem with our constitution or with any individual—but with Canada’s idiosyncratic form of government which amplifies the authority of majority governments. The combination of Canada’s first-past-the-post (FPTP) voting system, which grants large majorities to parties that get around 40 per cent of the vote, extreme and rising party discipline that often makes MPs nothing more than drones, and an impotent upper house that lacks democratic legitimacy (or, in the case of unicameral provincial governments, no upper house at all) means that a party that wins a majority wields enormous power.

To partisan opponents, these governments appear unstoppable, and so when actions seem egregious and arbitrary enough that stopping them can’t wait until the next election, the courts become viewed as the only avenue for substantive opposition. But that’s not the way the courts are meant to be used or seen—and partisans of all stripes should be wary of this tempting perception.

READ MORE: The path to a one-term Ford

Canada’s “Westminster” form of government, modelled on the British system, has been duplicated around the world in former colonies like Australia and New Zealand. But all of these transplants have evolved differently, and arguably render Canada’s model the most arbitrary. For instance, while MPs are supposed to represent their constituents, and the Prime Minister is supposed to serve at the behest of caucus, there has been an undeniable drift in Canada toward the centralization of power in leaders’ offices. Our leaders are chosen by party members, not by the caucus, which means leaders aren’t really accountable to a caucus that didn’t elect them, but ostensibly to the members who did—yet often drift away once a leader has been chosen. In Australia, the caucus normally chooses the leader, and frequently toss them out; four Australian prime ministers have been ousted in coups within their own caucus in the last decade. While this kind of instability isn’t necessarily something we should seek to emulate, at the very least it increases the power of the caucus at the expense of the leader’s office and protects the spirit of representative democracy.

In New Zealand, party discipline is also strict, but instead of using FPTP to elect their representatives, the country uses a mixed-member proportional system that not only gives seats to the winner of individual constituencies, but also to parties that cross a minimal threshold of the popular vote. Since New Zealand began using this system in 1993, no party has won an absolute majority, and governments have had to rely on the support of other parties, putting obvious constraints on what the leading party can do. New Zealand also has a much more limited system of judicial review: Legislative action is not justiciable, and thus there is no temptation or capacity to use the courts for political ends.

READ MORE: Political decision-making is speeding up, and that’s bad for democracy

A lack of legislative oversight is also an issue. For instance, Australia’s Senate is extremely powerful, vested with democratic authority, and has the power to reject or send back any bill. It is elected through proportional and preferential voting, and the governing party has not held a majority in the Senate since 2005 to 2008 (and before that, since 1981), so the government usually needs to negotiate with other parties to get legislation passed. Again, there are drawbacks to this system, but having a separate and powerful upper house provides an alternative avenue for opposition within the political process against majority governments in the lower house.

While Westminster models are all characterized by party discipline, Canada has a reputation for discipline in the extreme, non-existent rebellion on whipped votes, and minimal backbench opposition. Britain’s rowdy backbenchers are often willing to push back against the government, and it is not uncommon for governments to lose whipped votes. Labour leader Jeremy Corbyn voted against the previous Labour government 428 times as an MP. When was the last time a Canadian government lost a whipped vote? Indeed, when Liberal MP Leona Alleslev crossed the floor to the Conservatives this week, she voiced how entrenched this kind of discipline-oriented thinking is among Canadian politicians: “The government must be challenged openly and publicly. But for me to publicly criticize the government as a Liberal would undermine the government and, according to my code of conduct, be dishonourable.”

READ MORE: Chretien, Romanow and McMurtry attack Ford’s use of notwithstanding

Canada has none of the counterbalancing characteristics that limit the power of a majority government, and that only produces a potentially riven electorate where half can be made to feel that the government is wielding too much power, and that courts are the only recourse left.

Indeed, while the opposition can oppose legislation, there is often little it can do to actually prevent it. Let’s go back to the example of Ford’s council-slashing bill. While he defended it by citing his democratic legitimacy—he was elected with a majority mandate, while the Superior Court judge was appointed—his opponents look askance at a mandate that only included 41 per cent of the total votes cast, and which didn’t include, as part of the campaign, a vow to cut Toronto’s council. Meanwhile, opposition MPs have deployed legislative challenges like amendments, points of order, and other tactics, but those have been frustrated in the legislature. Meanwhile, citizens’ calls to Ontario PC MPPs have not led any to break ranks, because of iron-clad centralized party unity—making it look like majority governments are immune to external pressure.

There is, of course, one mechanism for restraining governments that works pretty well: elections. No matter what happens during a government’s term in office, voters get a chance to decisively hold them to account and, if they so choose, kick them out of office. But in the age of Twitter and the 24-hour news cycle, politics seems to take place in the eternal present, and the next election can seem like a lifetime away. So in the meantime, citizens look to the courts as a form of substantive, meaningful opposition.

But that’s not their job. Indeed, judicial restraint is a two-way street: Not only must judges understand their roles as interpreters, and not makers of the law, politicians must also be cautious about handing off the political football to the courts whenever they feel any pressure. For the most part, our governments have a fairly good track record for not doing this. Previous governments have referred questions to the Supreme Court, asking for advice on the constitutionality of potential legislation. Recent questions range from Senate reform (2014), to same-sex marriage (2004), to secession (1998). The courts can weigh in on important and hot-button political issues, but politicians must do so with extreme caution. Constantly throwing political issues into the judicial arena—by governments, opposition parties, and civilian opponents—and asking them to overturn and not simply review legislation or questions, turns judges into political actors by forcing them to constantly weigh in on political disputes, no matter how cautious they are in exercising restraint.

We’re already seeing it happen, and not just in Ontario. Conservative governments have launched constitutional challenges to Justin Trudeau’s carbon tax, while opponents of the Trans Mountain pipeline have cheered a court challenge that halted the construction of the project. Ford’s government has faced legal challenges on nearly every major move it has made, from changes to Ontario’s sex-ed curriculum to his decision to revoke cap-and-trade. Opponents are willing to take their squabbles to courts, and fight not just from across the aisle, but from the judicial bench. If left unchecked, it could produce the kind of judicialized politics we see in the nasty process around nominating judges to the U.S. Supreme Court.

The decision by Ontario’s highest court on Sept. 19 to stay the lower court ruling against Ford has, for now at least, defused a sticky constitutional debate. But Ford’s willingness to resort to the nuclear option just a few months into his premiership is a clear signal of the aggressive governing style Ontario will have to adapt to for at least a few more years. Ford appears unconcerned with actually asking people what they want, and he is treating his mandate like a blank cheque. But he alone can’t be blamed for this mess. Eighteenth-century thinker Jean-Jacques Rousseau begins his book The Social Contract by telling us to “take men as they are and laws as they might be,” and Ford is who he is, operating within the confines of our existing political institutions. It’s these institutions that are enabling at least the perception of rule by fiat, and exacerbate feelings of arbitrariness by offering few mechanisms for genuine participation or resistance between elections.