Opinion: 'Representation matters. It matters that young women, and young gay people, know that the highest office in this province is not off-limits to them' 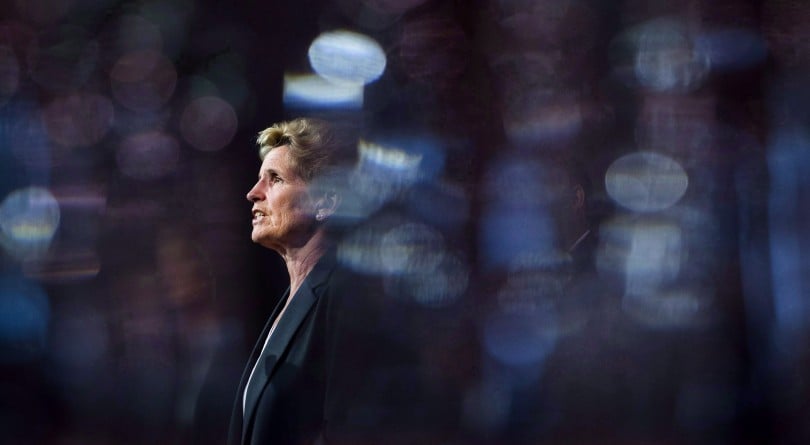 Ontario Liberal Leader Kathleen Wynne is pictured between glasses as she speaks during a campaign stop at Crosscut Distillery in Sudbury, Ont., on Wednesday, May 23, 2018. (Nathan Denette/CP)

Pam Hrick is a lawyer practising in downtown Toronto and was an alternate delegate for Kathleen Wynne at the 2013 Liberal leadership convention.

“[T]here was a time, not that long ago, when most of us in this race would have been deemed unsuitable. A Portuguese-Canadian, an Indo-Canadian, Italian-Canadian, female, gay, Catholic. Most of us could not have hoped to stand on this stage. But this province has changed.”

Avid political observers may recognize this as an excerpt from the speech Kathleen Wynne delivered at the 2013 Liberal leadership convention, hours before she won the hotly contested race to succeed Dalton McGuinty. Wynne was speaking of her fellow candidates whose mere presence in the race was barrier-breaking – unthinkable even a few years earlier. As a gay woman, she was also, of course, speaking of herself.

As a convention volunteer proudly decked out in my “Wynne. Now.” paraphernalia, I felt she was speaking to me. While she confidently delivered her carefully crafted pitch to the room that would choose the next premier, I thought back to a time, not too long before that, when I struggled with what it would mean to accept that I was a gay woman.

I remembered a conversation—one of many—that I’d had with a dear friend of mine, back in 2003. I was a 20-year-old political science student at the University of Ottawa. The Supreme Court had yet to proclaim same-sex marriage was constitutional. Out gay women role models were close to non-existent, including in the Canadian political arena. In addition to the personal struggles and emotional turmoil that were part of my own journey to coming to terms with my sexual orientation, I spoke with my friend about the stark reality that there would be serious restrictions on what I could do in my life if I was, indeed, a gay woman. As a student of the political realm, it naturally crossed my mind: if I am gay, there is no place for me in politics.

Since then, this province has changed.

I went along my way over the following decade, ultimately becoming comfortable with my own identity. During my time at university and beyond, I developed my commitment to social justice and my passion for advocating to end violence against women. I got involved in party politics, and even worked at Queen’s Park for a time before going off to law school.

During that same time, Kathleen Wynne slowly and steadily became a force in provincial politics. Elected as the MPP for Don Valley West not long after that conversation I had with my friend back in 2003, she rose through the Liberal ranks to become a cabinet minister in education, transportation, municipal affairs and housing, and Aboriginal affairs, before eventually entering the Liberal leadership race in 2012, breaking down barriers every step of the way.

I was quick to sign up to support Wynne’s leadership campaign because she so clearly cared about many of the same things I cared about. But I was also elated to even have the opportunity—one that nobody in this province had ever had before—to support a gay woman candidate to become premier.

I wish that 20-year-old me knew what I would be witnessing just short of my 30th birthday as Kathleen Wynne crashed through the glass ceiling that had existed not just for gay women but for all women in this province prior to February 2013. And I wish she knew Ontarians would collectively return Wynne to the premier’s office in June 2014.

Ontarians won’t return her to that office later this week. But that takes nothing away from what she has achieved there over the past five years.

Representation matters. It matters that young women, and young gay people, see what barriers Wynne has broken down and know that the highest office in this province is not off-limits to them.

Social justice matters. It matters that over the past five years, Wynne has made combatting gender-based violence an explicit priority (long before #MeToo became a global force), raised the minimum wage, and made post-secondary education more accessible for those who can least afford it.