Instead of feting the Philadelphia Eagles, Donald Trump celebrates himself

Opinion: By uninviting the Super Bowl champions and wrapping himself in the flag instead, Trump himself exposes the flaw in his opposition to the NFL's anthem kneelers 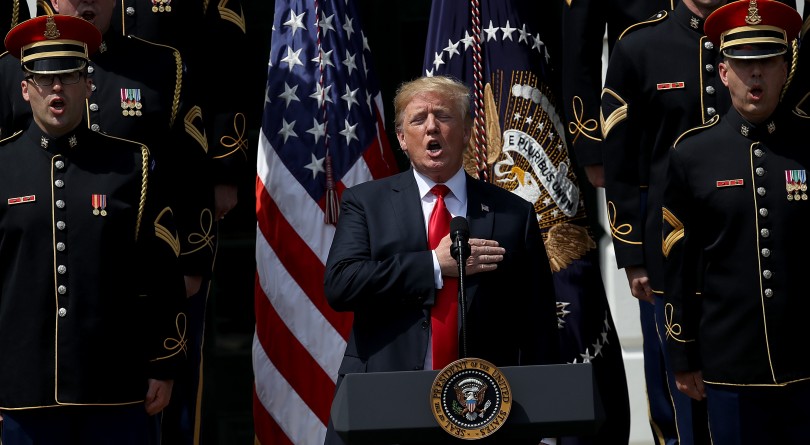 U.S. President Donald Trump sings the national anthem with a U.S. Army chorus during a "Celebration of America" event on the south lawn of the White House June 5, 2018 in Washington, DC. (Win McNamee/Getty Images)

Judging from President Donald Trump’s “Celebration of America”—the impromptu event he hosted on the White House lawn Tuesday afternoon after uninviting the National Football League’s Super Bowl champion, the Philadelphia Eagles, a mere 24 hours prior—the president is far more enthusiastic about standing for the anthem than actually singing it.

While dozens of U.S. Army Chorus members, stacked on the White House steps behind him in regal uniforms of navy and gold, enunciated the lyrics of “The Star Spangled Banner” with sonorous precision, Trump—with his hand over his heart and a bounce in his knee—mumbled pleasantly and adjacently to the song’s words under the day’s bright sun.

The president, clearly, had some lyrical trouble. Among the words half-formed and oddly shaped in his mouth were “at the twilight’s,” though Trump appeared to catch on for “last gleaming.” “Broad stripes and bright” he seemed to know. “Stars” — as in, the rest of the “Great American Flag” for which everyone was all-caps PROUDLY STANDING — he did not.

It was more of the same when “God Bless America” played, at the end of a four-minute speech peppered with words such as “military,” “honour,” and “patriotic.” Trump moved his slack lips around for a few bars before he gave up and bobbed his head instead, offering a brief smile and clearly enjoying himself.

It was only one of the many ways that Trump exposed his motives for the surprise cancellation. At an event that was ostensibly about America but was really about him, he wasn’t there to sing. He was there to perform patriotism.

Instead of an event held in the name of anyone else’s achievements—such as, say, a championship NFL team—Trump had the stage as he likes it: All to himself. In addition, he’d worked his way out of a possible embarrassment and orchestrated an event that would stoke the anger of his base over a favourite pet issue: NFL players who kneel for the anthem, even if not a single Eagle could be counted among them.

“We love our country, we respect our flag, and we always proudly stand for the national anthem, we always will stand for the national anthem!” Trump intoned, after thanking his special guests and Super Bowl champion understudies: the vice president, treasury secretary, secretary of the interior and a few Republican house members. He went on to explain nationalism as he sees it, including claiming that dead American heroes were “looking down and they are very, very proud.”

The event, Trump said, was “a beautiful, big celebration. Actually, to be honest, it’s even bigger than we had anticipated.” In reality, it lasted a mere nine minutes, but it still spoke volumes. It’s never been difficult to identify the glaring, central flaw of Trump’s fight over NFL players who protest, but here he was, literally acting it out. It never had anything to do with objective patriotism; it has always, instead, been about Trump’s power to control what that means.

In the Eagles—named after the national bird, housed in the birthplace of the constitution and champions of an objectively extraordinary Cinderella season—he found an ironic opponent rich in symbolism. The team has a reputation for being exceptionally active both in their charitable community work and their political activism. Safety Malcolm Jenkins, defensive end Chris Long and wide receiver Torrey Smith (now with the Carolina Panthers) continue to lobby for criminal justice and police reform. Jenkins and safety Rodney McLeod raised their fists periodically during the season as a protest against police violence, racism and inequality. For one game, Long—who donated his entire salary from last season to charity—put his arm around Jenkins’s shoulder.

It was clear, from the beginning, that not every Eagle would make the usual White House trip. The team never released an official count of who was supposed to attend the White House, though quarterbacks Nick Foles and Carson Wentz said they would. An anonymous team source put it at 10; a White House official said it was going to be two or three players, owner Jeffrey Lurie, as well as a mascot.

Trump—who famously prizes large crowds—was reportedly “furious.” In a statement Monday, he said they “disagree with their President” over standing for the anthem, a convenient but baseless statement. The entire team stood for the anthem for the entire regular season and playoffs, though Fox News had to issue a formal apology Tuesday after it aired B-roll footage of Eagles players kneeling in prayer during the channel’s coverage of the anthem debate, insinuating the players had kneeled. On Tuesday, the White House updated its reasoning, arguing that a smaller delegation to the White House amounted to “abandoning” Eagles fans. White House press secretary Sarah Sanders accused the team of planning a “political stunt.” A White House official told Politico the team “wanted to publicly humiliate” the president.

It was all too much for Jenkins, who posted a lengthy letter accusing the White House of painting players as anti-American, anti-flag and anti-military. Smith, who previously criticized Trump for his rhetoric—the president had slammed NFL players as “sons of bitches”—called it “a cowardly act to cancel the celebration because the majority of the people don’t want to see you.”

But knowing Trump, how could he do otherwise?

Trump’s need for approval and praise—high ratings, big crowds, standing ovations—is well-documented. He’s also, through repeated attacks on Black NFL players protesting racism and police violence by kneeling, married the national anthem with his own political brand. It’s become shorthand for the nationalistic patriotism central to his presidency. He said so himself, in a Monday night tweet: “The Philadelphia Eagles Football Team was invited to the White House. Unfortunately, only a small number of players decided to come, and we canceled the event. Staying in the Locker Room for the playing of our National Anthem is as disrespectful to our country as kneeling. Sorry!”

NFL leadership clearly had that in mind when they recently capitulated to Trump’s criticisms and put forward a new policy requiring players stand during the anthem, or stay in the locker room. Predictably, Trump has attacked the compromise.

In contrast to the White House’s many comments, the tight-lipped Eagles ownership put out a single three-sentence statement praising “the entire Eagles community” as “an inspiration.” Instead of going to Washington, the team held a practice.

Meanwhile, Trump ended his “patriotic celebration” by wandering along the edge of the crowd, shaking hands while an endless row of American flags flapped in the breeze behind him. He didn’t answer reporters’ questions over whether the president had painted the entire Eagles team as unpatriotic.

He had the military band, the military choir, the cheering fans holding miniature flags. Sure, the Eagles won the Super Bowl. But Trump is president.