Is the Liberals' federal poverty-reduction strategy even really a strategy?

Opinion: The federal government’s plan to tackle poverty includes no new programs or funding—but it's still a meaningful document 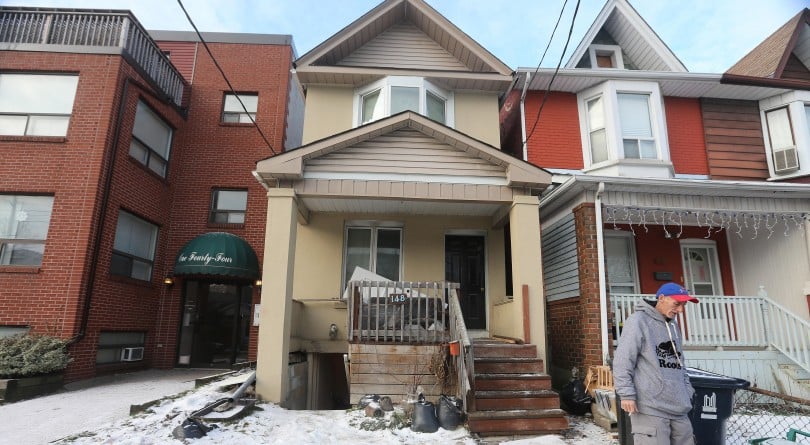 James Ribble, a formerly homeless man who has been living in a basement apartment with a busted foundation and leaking sewer gas for three months, waits for his landlord to pay part of his January rent in December 2017 in Toronto. (Steve Russell/Toronto Star via Getty Images)

Jennifer Robson is an associate professor of political management in the faculty of public affairs at Carleton University; before arriving at Carleton, she spent 15 years working on Parliament Hill in the voluntary sector and in the federal public service. She is the author of several reports and papers on poverty and Canadian social policy, has served on the Finance Minister’s tax expenditure review panel in 2016, and has provided, on a voluntary basis, occasional technical advice to several groups, including the Liberal Party of Canada before the 2015 election.

In one of a flurry of mid-August announcements from ministers as Justin Trudeau’s cabinet retreats to Vancouver Island, Minister of Families, Children and Social Development Jean-Yves Duclos released “Canada’s First Poverty Reduction Strategy,” a 100-plus-page document that is the culmination of more than a year of what seems to have become pro forma public consultations, meetings with academics (like me), and input from an advisory panel—and, it should be mentioned, that Canadians who are actually living in poverty were directly included in talks.

The strategy, however, doesn’t announce any new programs, or even new funding for existing programs. So is an anti-poverty plan that doesn’t commit new money, actually a meaningful strategy? Actually, yes—and for a few reasons.

To start, the strategy finally sets an official income poverty line for Canada—and until today, no federal government has been willing to define poverty. Until now, national statisticians have been left to measure “low-income” using three different indicators, none of which was recognized as a measure of poverty. From now on, the Market Basket Measure, an indicator based on the cost of an essential basket of goods (and adjusted for family size and different communities) will be Canada’s national poverty line. Work is already underway to review what should be in that basket and update it for 2018 and beyond.

The strategy also acknowledges that poverty isn’t just about not having enough income. Income poverty too often means not having enough to eat, living in bad housing, dealing with health problems and kids struggling with worse school outcomes. The strategy also offers a list of other indicators the government intends to track. This dashboard, the strategy argues, is important for getting a wider and clearer picture of poverty in Canada. The government has also adopted a new indicator—asset poverty, and its opposite, asset resilience—to look at whether Canadians have enough financial assets. Even a small financial cushion can make a world of difference in what you can afford when times are tough. Asset poverty measures whether a family could stay above the poverty line using their assets. One third of adult Canadians would run out of savings in less than a month meaning that Canada’s asset poverty rate is nearly three times our income poverty rate.

All of this is actually a big deal. Publicly deciding who is and who is not “poor” is a political call that past governments have all avoided—perhaps because that call can trigger an expectation that government will do something about the problems they are measuring.

In terms of action, the strategy does set targets to lower the poverty rate in Canada from about 12 per cent today to 10 per cent by 2020 and 6 per cent by 2030. The strategy also calls for a new standing advisory body that will, again, include people who have actually lived in poverty, not just those of us who write about it. The government plans to put the poverty line, the targets and the new advisory body in an anti-poverty law to be introduced in Parliament when it resumes.

Many, maybe even most, of the strategy’s pages are a roll-up of current or work-in-progress programs the federal government is listing as as part of the poverty-reduction toolkit—the Canada Child Benefit, increases to seniors’ benefits and Canada’s public pension system, funding for childcare, funding for affordable housing, and a revamped benefit for low-wage workers, for example. These are policies that the current government has been keen to talk about. To the government’s list, I would add things like making it easier for low-income Canadians to apply for many of those same benefits, support for settlement services for newcomers, changes to Employment Insurance, and education-savings bonds and grants so that kids in poverty have a fairer chance to finish high school and go on to training, college or university.

This part of the document echoes past government statements on poverty reduction. Back in 2010, one of the standing committees of the House of Commons released a report that called for a federal poverty-reduction plan. This was when Stephen Harper was still leading a minority government and opposition MPs managed to push the study and report through. The government response then was pretty much “thanks, we’re already doing a lot of poverty reduction.” To be fair, the current government will say that it has added or beefed up some tools to the federal toolkit, but it is still saying “we’re already doing a lot of poverty reduction”.

To some observers, this might seem like a plan with no action—all hat, no cattle. I see it differently.

That the government is pointing to things it’s already doing isn’t a bad thing; it’s a fact of having a long-standing system of programs, federal and provincial, that have an effect on poverty. Though some observers (like me) might be skeptical of the value of government strategy documents, perhaps a strategy doesn’t have to include big new programs. Maybe it’s enough to make some political decisions to put a name to the problem of poverty, to keep doing poverty reduction, but to set some goals to do it better.

Programs can be simplified and better coordinated. Benefit levels can be more responsive. And by 2020, we should have some indicator of whether this approach is working.