Jagmeet Singh has a lot of work to do

Paul Wells: The NDP leader addressed a stinker of a by-election result in Quebec with a pledge to do more. More of what? 'It's all on the table.' 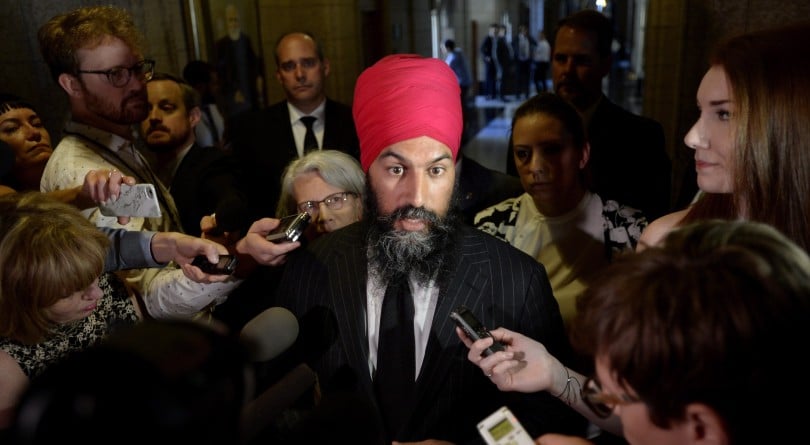 NDP Leader Jagmeet Singh speaks to reporters in the in the foyer of the House of Commons on Parliament Hill in Ottawa on Tuesday, June 19, 2018. (THE CANADIAN PRESS/Justin Tang)

We keep looking for a politician who’ll stand up and admit failure. Suddenly here was one. There’s a kind of nobility in taking your licking, I guess.

“We’re disappointed” in Monday’s by-election results in the Quebec heartland riding of Chicoutimi-Le Fjord, Jagmeet Singh told a knot of reporters outside the House of Commons before Question Period on Tuesday. “It’s clear that we have a lot of work to do. And it’s a priority for me.”

Behind the leader stood a half-dozen of his Quebec MPs, eyes straight forward, a little ashen-faced. Chicoutimi went orange in Jack Layton’s amazing 2011 wave, electing a 25-year-old chiropractor named Dany Morin with 38 per cent of the vote. Morin worked hard to hang onto his support, and he didn’t do too badly either, holding 30 per cent in 2015. But a Liberal named Denis Lemieux won 600 more votes than Morin, so that was the end of that.

Lemieux quit his seat last December citing family reasons. The resulting by-election was about as much fun as anyone can rightly expect, with both Justin Trudeau and Andrew Scheer visiting the riding. In the end Scheer’s candidate Richard Martel won with more than half the vote, the Liberals won a lot less—something that should preoccupy Liberals—and the NDP candidate, Éric Dubois, won 8.7 per cent of the vote. Something that plainly does preoccupy New Democrats.

Hence this pre-QP appearance by Singh and his Quebec MPs. Reporters had been told it would happen hours in advance. We spent the lunch hour wondering what on earth he could say. Turns out the answer was, not a lot.

“It’s clear,” Singh said, switching from French to English. “We’re very disappointed with the results. And the results show that we’ve got a lot of work to do. It’s a priority for me. And I’m here to answer any of your questions.”

That turned out to be optimistic. “What happened, Mr. Singh?” one of the reporters asked. “How do you explain this? It’s a real disaster.”

“It’s true,” Singh said. “We’re disappointed. It’s clear that these results show we have a lot of work to do. It’s a priority for me. We’ve already started this work. There was a meeting with our Quebec MPs and we’ll have a lot of conversations.”

Another reporter tried a punchier approach. “Is the Orange Wave over?”

Another reporter: “What’s the problem with the party? Is it the party or you?”

“The problem is that for a long time, we really weren’t there. For a few years.” He was talking about the chaotic aftermath of the 2015 election, when the party won only 16 seats in Quebec, against 59 in 2011. Then Tom Mulcair, the leader, was fired by his party. Then the party took a good long time picking a new leader. Then the new leader—the same Singh who was here being so clear about work to be done—had spent most of his Quebec time in Montreal, which who can blame anyone for doing that, but still. “So now it shows the reality that it’s very important to act, to do the work.”

It was increasingly clear he had shown up for this press availability with more willingness to talk than things to say, which was at least half admirable, but still, several of my colleagues had plainly decided the best way forward was to try to rattle the NDP leader with some direct questions. One tried: “Will you still be the leader in 2019?”

Another: “What concrete things are you going to do? For example, do you plan to live with a family in Quebec to immerse yourself in the culture and the language?”

“Everything’s on the table,” Singh answered.

OK, but what about the boarding-school thing? “Is that something you’re thinking of doing?”

“If you could have a do-over,” another reporter asked, “what would you do?”

“Do over where?” Singh replied.

“Like with this whole by-election. What would you do differently?”

“Ohhhhh,” he said, then paused briefly. “It’s a good question.” He paused some more.

Political leaders are often marveling at the gap between the warm welcome they receive personally and the support they get at the polls in Quebec. I remember Joe Clark making similar comments. Perhaps it would be best if new political leaders could simply be told, in a more or less systematic fashion, perhaps by the Chief Electoral Officer or by the mayor of Rouyn-Noranda, that they will be treated with great kindness by individual Quebecers, as just about everyone always is, but that this is not something they can take to the bank, or to whichever metaphorical receptacle they are hoping to crack open on election night and start counting votes.

Is this whole NDP leader thing simply not working for Singh in Quebec?

“As I’ve already said, we were disappointed,” he said. “It’s clear that the results show that there are things to do. It’s clear we now have to reflect and find ways to connect with people.”

Would now be a good time to run for Parliament? “It’s always been an option and that’s still the case.”

Has the party, and his own office, been worn down by internal investigations into various alleged misfeasances by various of his MPs?

“You could say it’s been a tough session, no doubt. The session has had different crises that we’ve had to manage and that definitely takes away time and effort from other areas. So that’s definitely been part of the struggles we’ve faced.”

With that, Singh was gone. I guess his aim was to avoid seeming complacent about an absolute stinker of a by-election result—albeit one that, it should be emphasized, was actually a little better than the party’s 7.8 per cent vote share in Chicoutimi in the general election of 2008. And still better than its 5 per cent in 2006, its 4 per cent in 2004 and its 2 per cent in 2000.

This is the real worry in the NDP these days, I think. Not so much that the province is turning with specific and personal fury against Jagmeet Singh, but that it is simply slipping into the perfectly vague apathy with which it regarded any New Democrat before Jack Layton and his walking stick made history in 2011.

In Awakenings, Penny Marshall’s 1990 film, researcher Robin Williams discovers that the drug L-Dopa has amazing powers to revive near-catatonic patients like Robert De Niro. But the compound’s effects are temporary, and despite all Williams’ efforts and anguish, De Niro ends the film much as he began. What must keep New Democrats up at night is not the sense that they’re doing something wrong, but that there is nothing they can do right to make up for the fact that Jack Layton is dead and somebody decided it’d be a good idea to teach Tom Mulcair a lesson.

A little more than 9 minutes after it had begun, Singh’s mea culpa session with the press gallery ended. Out came Alexandre Boulerice, his Quebec lieutenant, to chat with us some more.

“I think our leader, Jagmeet Singh, has the right reaction,” Boulerice said. “He’s humble, he’s realistic, he’ll take the time to make the necessary efforts to ensure it doesn’t happen again.” What’s he going to do? “Everything’s on the table,” Boulerice said, I guess inevitably. Singh would work to ensure the party’s message is “more punchy” and “more connected to the reality of Quebecers.”

Is Singh having trouble because he wears a turban? Some people used to say that turban would be trouble for him in Quebec. “For me, the experience I’ve had in Chicoutimi-Le Fjord for having been there, for having made calls, it was much more a problem of, ‘Who’s this guy?'” Boulerice said. “He’s not known. So people are like, ‘I’m not sure why I should vote NDP, and I don’t know your leader much either, so—maybe?’ But there’s no enthusiasm.”

Well, at least it’s not the turban.

“Nobody’s panicking, but there are things that need to change,” Boulerice said. “Sunday he’ll be at the Fête Nationale in Montreal with me and other activists of the NDP. And that’s one occasion, and there will be several others to present him.”

One hardly knows what to do. Should we tell Boulerice political leaders have visited Quebec on June 24 before? That it doesn’t really change things, as a rule? I didn’t have the heart.

“This is something we need to do,” Boulerice said. “We need to do it fast. And we know that.” The next federal election is 16 months away.