Opinion: There's a belief that 'pro-business' politicians are only forged through vows to slash taxes and red tape—but it's also about cultivating a business climate 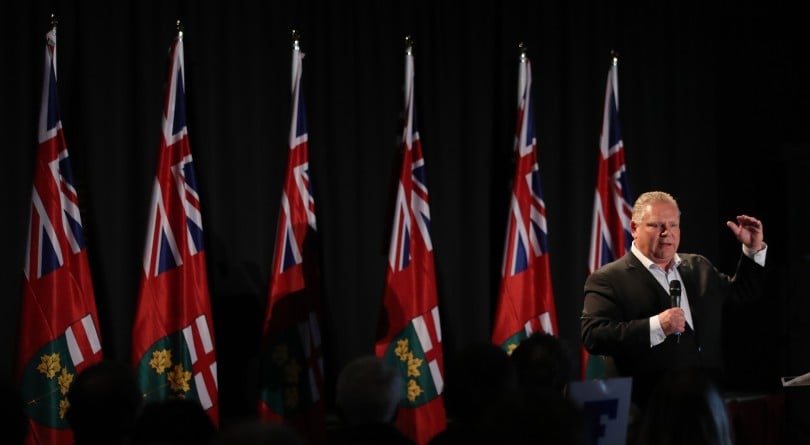 Gabe De Roche is a former advisor to Ontario Liberal cabinet ministers. He is currently an account director and a consultant on corporate reputation at Hill+Knowlton Strategies in Toronto.

Ontario Progressive Conservative leader Doug Ford is running to lead Canada’s largest province on a promise to make Ontario “open for business.” His plan? Lowering the corporate income tax rate from 11.5 per cent to 10.5 per cent. Withdrawing from the cap-and-trade carbon pricing system established with Quebec and California. And freezing the minimum wage at $14, rather than raising it to $15 as promised by the Kathleen Wynne Liberals.

In a nutshell, Ford—whose antics with his brother Rob on Toronto city council and now as a populist provincial leader have earned him international notoriety—wants to attract businesses with lower taxes and de-regulation. It’s a classic mantra for any politician that wants to position him or herself as pro-business.

But that’s not a recipe for an Ontario that’s open for business. It’s a mish-mash of harmful slogans, not a plan. At best, it’s a plan for uncertainty and risk—precisely what businesses don’t want.

Years spent in the provincial government advising officials like the minister of economic development and trade showed me that pro-growth policy comes down to the business climates that governments help create—ones that have the right mix of talent, reliable infrastructure, competitive tax rates, quality of life for employees and their families, clusters of innovation, and trade agreements that grant access to key markets.

It’s a long list, but if governments fail to address any one of these issues, it hinders the province’s competitiveness and stifles investment. All of these factors combine to shape our reputation around the world as a province that is truly open for business; tax cuts and de-regulation barely scratch the surface.

While sitting in boardrooms from Tokyo to São Paulo on trade missions to attract jobs to Ontario, I heard admiration from executives for the business climate our province has built. Over and over again, business leaders abroad told me how they especially appreciate the talented workforce our province has trained and fostered, and how much it drives their decisions to invest here.

In fact, that was the core of Toronto and Ontario’s bid to be the home of Amazon’s high-profile new headquarters. Our reputation for best-in-the-world talent—along with other factors like infrastructure, innovation, our health care system, liveable cities, and access to global markets—got us to the final round and we may yet be a winner. It’s our well-deserved reputation as a great place to live and do business that attracts new investment and new jobs.

Far from being anti-business, the Liberal government’s efforts to cultivate this stable, innovative business climate have helped corporations in the province achieve record profits last year. Unemployment in the province is the lowest it has been in nearly 20 years. And Ontario’s economic growth is outpacing the G7’s.

With his penchant for unpredictability, Doug Ford represents a threat to that stability. He was the chief defender of his brother Rob’s disastrous tenure as mayor of Toronto, a four-year nightmare that tarnished our brand internationally and turned the country’s largest city into fodder for late-night talk shows. A photo circulating on Twitter of actor Damian Lewis shooting a thriller inspired by Rob Ford-era Toronto—in full special-effects makeup—is a foreboding sign that we’ll not soon forget the damage the Fords did to our city and its reputation, and we’ll once again get to cringe together in shame (but this time with popcorn, at least).

Mere weeks into his tenure as leader of the PC Party and, if polls are to be believed, the presumptive next premier of the province, no less an outlet than the New York Times has already shone a light on his embrace of Trump-style politics (a “Tin-Pot Northern Trump,” as the headline put it). Our reputational damage continues—and these things colour the views of businesses choosing where to invest. In trade missions during the Ford years, many a meeting included a joking jab about Toronto’s infamous mayor. That’s not the tone you want when you’re pitching for jobs and investment.

With the uncertainty, unpredictability and, well, lunacy south of the border, Canada and Ontario have stood out as a beacon of stability. But bluster, slogans, and short-sighted promises do not a stable business climate make. Voters should demand a well thought-out plan to keep the provincial economy growing—a plan that goes deeper than tax cuts and de-regulation, and that preserves the qualities that make Ontario an attractive place for businesses to grow.