The Trudeau family's love of tyrants 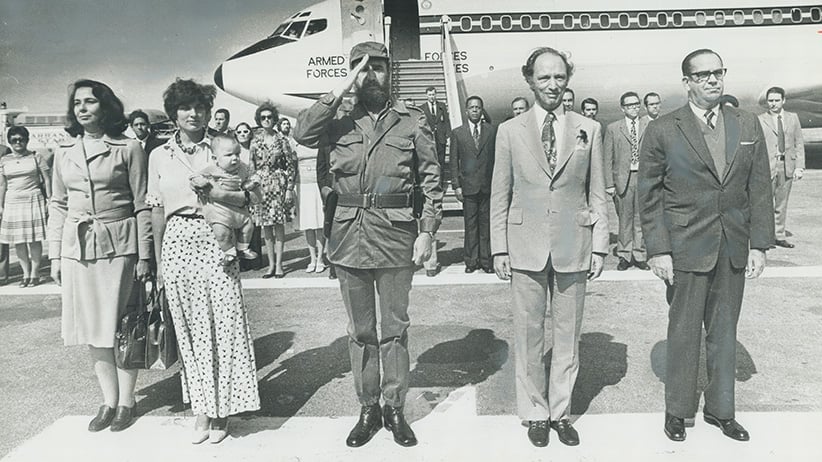 Mark Milke is a Calgary columnist and author of four books.

Back in the summer of 2006, Pierre Trudeau’s youngest son, Alexandre (Sacha) Trudeau wrote a fawning  happy 80th birthday column in the Toronto Star in praise of then Cuban dictator Fidel Castro.  The piece included tributes such as how the revolutionary leader was a “great adventurer…a great scientific mind,” someone whose “intellect is one of the most broad and complete that can be found. ”

Castro, Trudeau claimed, was “an expert on genetics, on automobile combustion engines, on stock markets, on everything.”  Alexandre pressed upon his readers to analyze Castro in “psychoanalytical terms”, to think of Cubans as children and Castro their father. Trudeau then fondly recalled his late brother, Michel, who when they were young kids complained to their mother that he had fewer friends than his brothers.  Margaret Trudeau replied that unlike his brothers, Michel “had the greatest friend of all: he had Fidel.”

Shortly after Trudeau’s column appeared, I interviewed a naturalized Australian, Luis Garcia, who with his parents had left Cuba in 1971, when Garcia was 12 years old. Given they asked to leave—one must make such requests in communist dictatorships— the Garcias were labelled “gusanos” (counter-revolutionaries). Luis’ father was then forced to work for three years in the sugar cane fields in service to the communist revolution, government, and dictator from whom they wished to flee. Garcia told me when he initially read Alexandre’s comments he thought it was parody. He then realized Alexandre Trudeau was earnestly serious.

READ: On Castro’s death, a look at Fidel and Pierre—and Justin

I thought of Alexandre Trudeau’s fawning 2006 tribute recently given it was 10 years ago this month that Fidel Castro resigned. (By coincidence, I was in Cuba the day Castro stepped down. Not being a fan of tyrants, I toasted his resignation in a Varadero bar with a friend who broke his Lent fast from alcohol to join me.) But the anniversary also brings to mind Alexandre Trudeau’s brother—the prime minister, and his weird, fantasy belief that another autocracy, China, is somehow efficient on economic and environmental matters. That belief helps explain his relentless pursuit of a free trade deal with a country whose economic model, while improving, is best described as crony capitalism and whose environmental practices would never be tolerated by citizens in a liberal democracy.

Having a soft spot for tyrants prompts multiple blind spots,whether on democracy, the economy or, more recently, on the environment. All have been on display in the Trudeau family’s ongoing infatuation with tyrannies and autocracies. in the comments from Alexandre, Margaret and Justin Trudeau. We see evidence of the Trudeau family’s long love affair with the world’s autocrats and tyrants.  But the problem started with Pierre.

A love story: Trudeaus and tyrants

Bob Plamondon, author of a 2013 biography of  Pierre Trudeau recounts how Trudeau the Elder visited the Soviet Union in 1952 to discuss economics, this accompanied by four Canadian communists. “It was there that he remarked to the wife of U.S. chargé d’affaires that he was a communist and a Catholic and was in Moscow to criticize the U.S. and praise the Soviet Union,” Plamondon writes. As the author recounts, Canadian diplomats thought Trudeau said such things out of “infantile desire to shock”.

Trudeau was an intellectual dilettante for much of his life and his thoughts and actions thus often skipped over whether his positions made any sense. He may not have actually been a communist in 1952 but his remarks revealed an inclination even then to skip over the brutality of communist countries. By contrast, British journalist Malcom Muggeridge, initially left-wing, soon changed his mind after his 1933 visit to the Soviet Union where he skirted the official government tours so as to investigate and report on the Josef Stalin-caused famine in Soviet Ukraine. That famine, Muggeridge later remarked to an interviewer, “was the deliberate creation of a bureaucratic mind which demanded the collectivization of agriculture, immediately, as a purely theoretical proposition, without any consideration whatever of the consequences in human suffering.” In other words, Moscow’s centrally planned economy was murderous. It was to take at least 6 million lives.

This was the country that Trudeau visited—still under Stalin’s rule in 1952—and to which his flippant remarks were directed. Similarly, in 1960, Trudeau accepted an invitation from the Chinese government to visit along with Jacques Hébert, a friend whom Trudeau would appoint to the Senate. They travelled around China for six weeks on a state-sponsored tour and they did so smack dab in the middle of a wrenching state-imposed famine courtesy of Chairman Mao’s Great Leap Forward “reforms”, which began in 1958 and would last until 1962.

As with the state-caused famine in Ukraine, the Chinese famine during the Great Leap forward resulted from state-imposed collectivization of farms. That produced an economic and human genocide that would take the lives of “somewhere between 20 million and 42 million people” as French authors Jean-Louis Margolin and Pierre Rigoulot recounted in the Black Book of Communism.  Unlike Muggeridge, who skipped the Potemkin tours, Trudeau’s Chinese government 1960 visit was one of many where wilful blindness was routine—and accompanied by a belief that centrally planned economies were efficient and effective.

Evidence for this Trudeau reflex appeared again, this time with Cuba in 1964. There, Trudeau remarked how “When you see mass rallies with Fidel Castro speaking for 90 minutes in 100-degree heat you wonder what is the need for elections?” And seven years later, as prime minister on an official state visit to the Soviet Union in 1971, Trudeau reminded his newest hosts of how Canada—a NATO member then and now—had, under his prime ministerial reign, cut our troops commitment to Europe in half. That visit took place just three years after the Soviet Union crushed a student, nationalist and anti-communist uprising in Prague, Czechoslovakia—the Prague Spring, in 1968. Yet three years later Trudeau chose to undermine the Western alliance.

Beyond Pierre Trudeau’s own history, and the Alexandre-Justin-Margaret reminiscing about an old family tyrant-friend in a warm weather lockdown communist paradise, the father and son Trudeau approach to China then and now is revealing.

Trudeau senior’s infatuations with the Soviet Union, China and Cuba were never of a Richard Nixon-Henry Kissinger realpolitik variety that saw China as both too big to ignore and capable of offsetting the influence of the Soviet Union. Instead, Canadians, then as now, are treated to an over-eager approach which mirrors Justin’s father’s mindset and reveal his enduring influence on his son

As an example, from economics and the environment, recall Justin Trudeau’s unguarded comments made in 2013, where he expressed “a level of admiration I actually have for China” with his reasoning that “their basic dictatorship is allowing them to actually turn their economy around on a dime and say ‘we need to go green fastest, we need to start investing in solar.’”

As Trudeau’s own government demonstrates, any government any time can subsidize an unprofitable company or sector and for any reason. That hardy means an economy will “turn on a dime” or that the subsidized activities will one day be profitable.

Economics and the environment: Neither is helped by autocracies

These comments reveal a modern Trudeau fascination with autocracies; in particular, the notion that China’s severely polluted environment can be helped by central, top-down planning from Beijing.

Beijing can announce all the windmills and solar panels it wants. But recall the politically-centralized model in existence since Mao which forestalls the political consequences of issues (pollution in China today as a severe example), which would explode in a liberal democracy.

READ: Venezuela’s collapse and the ‘useful idiots’ of the Canadian left

The very Chinese model of governance, which represses dissent, was not only unsuited to economic growth before the 1979 reforms by Deng Xiaoping, it has been deadly to Chinese health. That’s because public pressure cannot swap sub-par politicians out for accountable ones. In an economy of state-owned companies, no one is responsible for pollution, or to enforce pollution laws in the private sector. Nor does the current Chinese model allow for a flourishing rules-based economy which encourages private sector innovation, like it has in the West on everything from fuel efficient automobiles to furnaces.

For example, consider California, where public agitation led to environmental reforms that reduced smog. In Los Angeles in the 1950s and 1960s the city was choked with smog and that spurred reasonable, i.e., deliverable pollution reform, by democratically elected, accountable governments at both the state and national level. It didn’t happen overnight and LA air has furthered improved since the 1980s. Cleaner air came both from reasonable anti-smog regulation but also due to massive—and possible— technological advances in automobiles.

The latter is a key point. It is one thing to credit regulation that addressed technologically possible reforms—requiring catalytic converters in automobiles and ending gasoline with lead in it. It is quite another to assume all regulation from governments and especially autocracies will further environmental reform. (It is also why the demand for over-regulation from those who demand and end to oil and gas will ultimately fail: Because the world cannot live without oil and gas any time soon.)

In China, public pressure at the ballot box and even by consumers is either nonexistent or feeble. And Chinese government statistics are unreliable, a fact which additionally complicates environmental reform.

Autocracies are not efficient in anything

Anyone, including the prime minister, who thinks China has an effective or enlightened policy on the environment is unaware or blithely ignoring just how corrupt, ineffective and inefficient autocracies are. Those who place their confidence or faith in Beijing are betting all their chips on the sole regulation-from-above “horse”.

The father-son reunion on China is not mysterious. Nor are their basic flawed assumptions about how political power can solve all problems if only the rulers somehow have enough control. The Trudeau family’s dewy-eyed approach to tyrants has always been unfortunate. Their family-tyrant friends were economically illiterate and, just as often, deadly to their own populations. Central planning was of no use and was of much harm to Russians, Chinese and Cubans.

The elder Trudeau’s acolytes always thought of him as a “philosopher king”—that he knew better than markets and ordinary mortals and business owners how to manage the economy efficiently from the top down. His son has imbibed the same conceit. Justin has continued in that tradition in his own political life, with his fawning Castro comments and his weird China-worship on environmental matters.